We review 1846: Race for the Midwest from GMT Games. In this economic and route building game, players are trying to earn the most wealth by buying and investing in train companies in the 1800s. 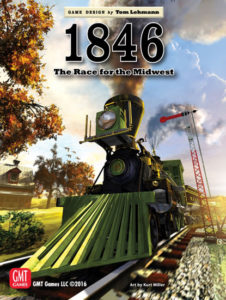 Board gaming has always had a lot of variety that people tend to flock towards. Some people love light party games. Others find 45-60 minute medium weight games are perfect for them. Of course others still enjoy deeply strategic 3-4 hour mind melting gaming sessions.

While I’ve been in almost all of these categories, I tend to fall to the heavier side of the gaming spectrum. One genre that has always escaped me was 18XX games. Train gamers seem too often be segmented from the rest of us. They have their own little area at most conventions and it is just a part of the hobby I’ve never explored.

In part it is because 18XX games are often print-and-play affairs or things you have to order and wait for years to arrive. Luckily, 1846: The Race for the Midwest has been beautifully produced by GMT Games and has given me a chance to dip my toe into the 18XX waters.

In 1846 players will invest in and operate train companies. To start the game players draft private companies that can give extra bonuses to the player who chooses them. During the first stock round you can choose to start any of the available public companies by buying 20% ownership in the company. Then you are able to choose the starting value of stock in the company from $40 to $150 a share. Of course depending on your decision, you will have to pay for that share from your personal money into the company’s treasury.

It’s worth noting at this point how important it is to understand that money in each company is completely separate from each player’s personal money. Companies use their money to operate, while players will use their personal money to buy and sell stocks. At the end of the game, only your personal wealth is taken into account. The game comes with paper money, so beware of that. Most 18XX players use poker chips.

The stock round continues until all players pass. Throughout the stock round you can start multiple companies or buy shares in companies that have been started by other players. It is possible to forcefully take over another company by acquiring more shares than the current president.

After the stock round there are two operating rounds. In each OR, every private company will generate income and operation. Then each public company can operate, starting with the company with the most valuable stock. During an operating round you can do the following:

The key to running a successful train company is to maximize profits. Each train can run through a certain number of cities and each city provides a set amount of income for the company who runs through it. You must include at least one of your stations in every route that you run.

The most important decision you have to make is how to distribute your earnings. If you run routes for $100, you can either put all the money in the company, distribute it to shareholders, or split it 50/50. If you withhold earnings and keep it all for the company, your stock price will go down. However, if you pay dividends to shareholders your stock price will increase.

As more advanced trains get purchased, the game will enter new phases where new track upgrades become available and old trains rust away. As the president of a train company, it is crucial you keep an eye on the trains’ situation as you are required to have a train at the end of the operating round, so if your only train rusts, you will be forced to buy a new one. If your company doesn’t have the money to do so, the president kindly buys it out of their personal funds.

Private companies also fade away as the game progresses. You can, however, have a public company buy the private companies during the early game. This allows the player to get back their investment in the company, hopefully after already getting some income from them.

You will continue having stock rounds followed by two operations rounds throughout the game until the bank busts. The amount of money in the bank is variable based on the number of players. When all that money is gone, the game ends at the end of the second operating round of that turn. The player who has the highest personal net worth including cash on hand and stock values is the winner.

Let me start by saying this: no one should be scared of 18XX games. It isn’t a secret club that you have to be a diehard train conductor to be able to enter. While 1846 isn’t a simple game, it is no harder to learn and play than most medium-to-heavy weight Euro games. If you can figure out games like Terraforming Mars or Terra Mystica, you will be able to pick up 1846. I intentionally made sure to play my first game with other players with no 18XX experience and no one struggled to grasp what was going on.

Although it is my first experience with 18XX, I think it is a great place to start. Many start with auctions of the private companies, requiring you to have some frame of reference on the value of things. The fact that you draft privates and just pay the face value makes it a lot easier to jump into. There’s nothing like spending 20-30 minutes having rules thrown at you and then immediately being asked to openly bid on items when you haven’t really seen it all come together yet. Like most games, it will take a round or two to make everything click.

It is quite an investment of time. Playing with both 3 and 4 players the game took, on average, a bit over 4 hours. For an 18XX game that is considered fairly short, but if you are coming from shorter games it is important to be aware of what you are getting yourself into. Down time can be a problem throughout as well, especially if you control one company that is either at the front or back of the turn order. You can certainly plan ahead and use that down time to prepare, but if you are playing with exceptionally analysis paralysis-prone players, it can make a mildly annoying issue more frustrating.

As far as the game mechanisms, it is a wonderful mix of economics and route building. The economics of the game are deep enough to border on simulation. The decision on when to withhold earnings to put more money in the company versus pay dividends to shareholders is often agonizing. Withholding is the best way to get money into the company to ensure it has enough capital to operate and potentially make even more money. But it comes at the expense of paying out to your personal money and increasing the value of share in the company, which is all that will count when it is all said and done.

When it comes to route building, the idea that you want to lay track to connect your stations to high value cities is fairly obvious. There is also a bonus for running from the east to west coasts of the map. However, if a city doesn’t have an empty station and you don’t have a station in the city your company cannot run through it. This allows you to block off routes to other players based on strategically placing your stations throughout the Midwest. It can be a little mean at times, but it often done out of self-preservation rather than outright spitefulness. Luckily this is often just an inconvenience as you are often able to work a new route around cities you are locked out of.

At the end of the day, 1846: Race to the Midwest is a heavy game that focuses on the economics of buying and selling stocks. The route building elements drive how successful those companies are and, ultimately just like real life, you want to buy low and sell high. Even if you work out the routes and earn the most profit for your company, you have to wisely invest in other companies at the right times to come out on top.

Please don’t let the 18XX label scare you off. There isn’t anything exceptionally different about 1846: The Race for the Midwest than every other board game out there. I was pleasantly surprised not only by how fairly straightforward it was to learn, but also by how fun it is to play.

While I expected to enjoy the stock aspect in 1846: The Race for the Midwest, the route building really adds a layer of depth that I haven’t experienced before. You don’t just invest in companies and then see how their value changes based on some random event or even in a way that is exactly predictable. A company that previously earned a huge sum of money and paid out to its shareholders may suddenly find themselves cut off from the routes they previously ran. Or, worse yet, their president may decide to just start hoarding all the money into the company.

Final Score: 4.5 Stars – Even though there is a lot to dig into, I’m really impressed by what 1846: The Race for the Midwest has delivered.

Hits:
• Lots of depth
• Multiple strategies you can employ
• Not nearly as hard to learn as you may think and offers unique gameplay

Misses:
• Can have significant down time
• Comes with paper money, you need poker chips or pen and paper instead.