We review Nerdy Inventions, a dice game from Mayday Games where players will roll dice to build inventions and gain victory points. The player with the most VPs at game’s end wins and is the nerdiest inventor. 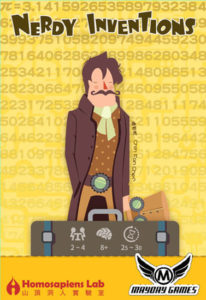 Innovation has moved human civilization forward to the current “information age.” Science fiction, in some cases, has become science fact (unfortunately space colonization and travel are still vastly fiction – BOO!). Who got us to this point? Well nerds and their inventions of course. And by nerds I mean the single-minded experts in a technical field, not the socially awkward ones who couldn’t wait for high school to be over. Nerds like John O’Sullivan, Elon Musk, and Martin Cooper, these inventors help create things we take for granted such as wireless internet, electric propulsion, and cellular phones.

This bring us to the game we’re going to review today, Nerdy Inventions by Mayday Games. This dice game has players rolling and trying to build inventions to gain VPs. Does Nerdy Inventions make you feel like an innovator? Read on!

Nerdy Inventions is a dice game for 2-4 players and plays between 25–30 minutes and plays best with 4 players.

The goal as mentioned above is to gain the most VPs and to do that, you need to build and collect different kinds of inventions.

On a player’s turn, they will roll 3 dice and have 4 different types of actions to use:

Build Invention: All inventions in Invention Row will show a fixed number (1-3) and/or 1-3 gears. The gears and dice value on a card combine to form a number between 1-6. So if your dice match the invention, you can take the card and “build” it.

Use Invention: Use an invention by tapping it and using the invention’s ability. The abilities usually provide some form of dice manipulation. The invention is now used and must be “charged” to use it again.

Play will continue above for each player until the game ends (two possible ways) and the player with the most points wins.

Let me start out by saying that the title and overview of the game Nerdy Inventions was a misnomer. First, the pictures on the invention cards are designed in a Victorian or steam punk style. So, these didn’t seem nerdy to me, but rather historical. Maybe my definition of nerdy is off, but if there were inventions like “slick-shoes” or “pinchers of peril” I would be more inclined to agree with the title.

Second, players are supposed to be “building” inventions and instead players are buying existing inventions with dice rolls. This does not make Nerdy Inventions a bad game but it shows that the game’s theme is non-existent.

A bad theme will not kill a game for me, it’s really the actual game that I care more about. For the most part, the game itself is fairly enjoyable. The main focus of a player’s turn will be their dice roll and being able to manipulate them to “build” inventions and gain VPs. Early in the game, the turns go quickly and all players will start with an invention and most with a tool card.

The tool card is used with an uncharged invention and can increase or decrease a dice value equal the invention’s level. This gives players another way to manipulate their rolls and gives a player more options. What I really like about the tool card is once it’s used, it’s then moved to the player who doesn’t have one. So this adds to game balance and gives other players who don’t start out with one a chance to use it.

Now, where the enjoyment can somewhat stall is when players gain inventions or just become desperate to “build” something. If players don’t have favorable rolls, then they tend to spend a significant amount of time trying to “build” a desired invention. So analysis by paralysis can be a significant during the game and can slow it down. From my experience, this caused some players to either help the current player or distract them from the game itself. Neither is fun or enjoyable.

Another factor that can affect both positively and negatively is luck. Unfortunately, it can be significant to the game enjoyment. Each turn, players really need to “build” an invention to keep up with other players. One turn without “building” can hurt, but you’re still in the game. More than that and you’re really out of the running. So, as noted above players who roll repeatedly unfavorably will take lots of time and can get somewhat disheartened.

The last thing I want to note is the two end game options. The first which is completely flawed is using the submarine invention’s ability which unbalances game play because the game ends immediately once used. Using this invention’s ability will not only end the game earlier than expected, but it also robs players from having a full experience. The second is when the last card is dealt from the invention deck, play continues until the starting player’s turn, ending the game. This gives the game great balance and gives each player equal turns. Not sure how the designers could get one rule so wrong and the other so right, but it happened.

I think Nerdy Inventions is a fairly easy game to learn and play. It does have some really good mechanics like the tool cards, which give more options to players, and non-invention game rules which gives all players equal turns.

Unfortunately, the amount of options and luck can slow the game down and may discourage players from future plays. The biggest negative holding Nerdy Inventions back is the submarine invention’s end game ability. This is unbalances the game and can prematurely end the game and rob players of a balanced game experience.

Final Score: 2.5 Stars – An ok dice game that’s easy to learn and play, but with flaws that hold it back from being great.