We review Mystic Miracles for iPhone and iPad. This indie title seeks to take the 7 Wonders experience and bring it to your iOS device. While not a direct copy of that award winning card game, it's clearly trying to replicate the game experience. 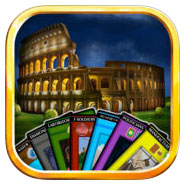 Full disclosure: I am a 7 Wonders addict. You bring out a copy of 7 Wonders and I will be willing to stop whatever I’m doing and play immediately. I don’t know what it is about that game, but I’ve never had a bad time playing it, even when I lose horribly (which seems to happen often).

For YEARS we have been teased about there being a 7 Wonders iOS app in the works. Asmodee Games has even been including flyers in with their 7 Wonders products saying an app is “coming soon”. It’s been so long, I’ve filed this one away into the “I’ll believe it when I see it” category.

So what does all this have to do with today’s review of Mystic Miracles? Plenty! Mystic Miracles is actually a 7 Wonders clone…of sorts. Published by an indie developer, Mystic Miracles seeks to give us 7 Wonders experience on our iPads and iPhones. Did this lone developer accomplish what Repos Prod has been trying to do for years? Let’s find out!

In Mystic Miracles, players are trying to acquire the most victory points over the games 3 Epochs (rounds). This is accomplished by the familiar “pick and pass” style of card drafting.

Each round, players start with a hand of cards, choose one to build, and pass the rest to their neighbor…repeat. Cards range from resources to military structures to science buildings, etc. Each player also has a wonder that they can build in three different stages.

Sounds familiar? It should, Mystic Miracles is basically 7 Wonders. The developer isn’t even shy about promoting it as a 7 Wonders replacement. However, I should note that there are some game play differences between Mystic Miracles and 7 Wonders.

To name a few:

Other than that, the only differences between Mystic Miracles and 7 Wonders are cosmetic. The artwork is different and so are card names (and some resource types).

For the app interface itself, it’s functional, but could probably use a bit of polish. Cards show what they provide on top, with their cost on the bottom. A handy icon in the corner of the card will indicate if you can build the card for free, for a cost, or not at all.

Behind the cards sits your “kingdom”. After you build a card, its relevant icon will go onto one of the sides of the display. At the bottom of the screen sits the three stages of your wonder. The bubble for the wonder stage turns gold after you build it.

At the top of the screen sits a handy chart that lists how much each player has in: gold, victory points, military power, and science cards.

The cards you are choosing from can also be swiped up or down if you want to see the icons in your kingdom that they are currently covering. You can also swipe left or right to view other player’s kingdoms.

Let’s start by setting some expectations. Mystic Miracles is very much an indie game, so I wasn’t going in expecting the same polish I see from Playdek or Asmodee Digital. The artwork in Mystic Miracles works, but isn’t going to dazzle anyone.

The app also had a few annoying bugs, such as that the music will play, even if your phone is set to silent mode. I had to manually turn my volume down to zero to turn the music off.

The app also features ads between games. Were this a free to play game, I wouldn’t care, but since it’s a $2 paid app, that’s just unacceptable.

Moving on, unfortunately the app doesn’t have any kind of guided tutorial for new players. There is a rules page you can read to get up to speed. But if you are a 7 Wonders fan, you probably don’t even need it.

Mystic Miracles includes two modes of play, online and offline vs AI. We tried to test out the online functionality, but couldn’t get a game in. The matchmaking lobby was empty every time I checked. And while the developer did provide us with 2 review codes, we still couldn’t get an online game going since each online game requires at least 3 real players.

For offline, the AI matches move swiftly. Unfortunately, there is no way to choose the AIs difficulty level. I don’t think I’ve ever lost to the AI (and I routinely lose at 7 Wonders in real life) and some matches I’ve thoroughly trounced the AI.

But not all is bad. This game is still the closest we have to 7 Wonders on our digital devices. Unless Repos gets their butts in gear and actually releases 7 Wonders, digital players don’t really have any other options.

And despite the few rules differences, this is 7 Wonders (for the most part). You can build your wonder, fight military battles between rounds, and go heavy on science to score lots of points.

However, with the mediocre skill of the AI, chances are you aren’t going to be playing Mystic Miracles for hours on end like you might do with other board game apps. I think this one is best used for a brief distraction while you are trying to kill time. Mystic Miracles is fun for a game every now and then, but it’s not something you are going to be drawn back to over and over. The polish just isn’t there.

As Homer Simpson put it, “de-fault…the two sweetest words in the English language”. By virtue of being the only way to play 7 Wonders on our iDevices, Mystic Miracles is worth a look for the die hard 7 Wonders addicts out there.

To be honest though, the lack of polish in the app makes me feel like this one should be a free to play app and use ads to generate revenue. Mystic Miracles is actually free on Android, but costs $1.99 on iOS. Even at only $2, it’s hard to give it a buy recommendation. While it has its moments, Mystic Miracles definitely has a lot of room for improvement.

However, until 7 Wonders is ACTUALLY released for iOS, I’ll probably still jump back into this one for a game every now and then.

Final Score: 2 Stars – While not terrible, the app still has a lot of room for improvement. This is a fairly bare bones 7 Wonders-like experience. 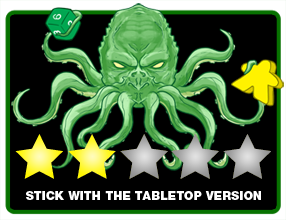 Misses:
• App can be buggy and lacks polish
• Ads in a paid app
• Music plays even on silent mode
• No guided tutorial
• Online play non-existent 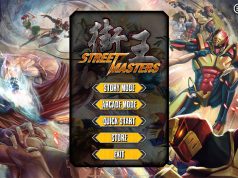 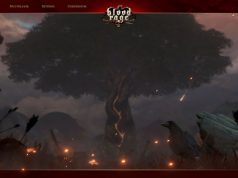 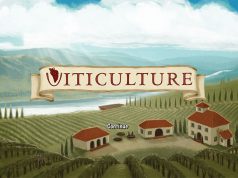