We review the pure area control board game Morocco, published by Eagle-Gryphon Games. In Morocco, players are trying to control the most vendor stalls in this light-themed eurogame. 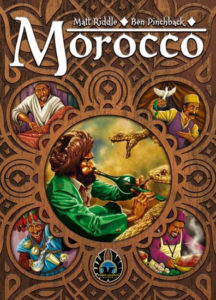 In strategy board games, we often see mechanics get used and re-used without a lot of differentiation. Games tend to separate themselves by their theme or artwork. However, the best games find a way to take an existing mechanic and spin it in an interesting and new direction.

Morocco is as pure of an area control game as I’ve played in quite a while. But there are a few twists and turns along the way that definitely heightened my interest. So let’s take a look at how it stacks up.

Morocco is an area control game for 2-5 players. It plays in about 45 minutes and works well with all player counts.

In Morocco you are a trader in a market. I guess. To say the theme in this game is thin would be giving it too much credit. So, for starters, if you are a theme-first gamer you may want to look elsewhere. In Morocco, you get cubes and try to put your meeples in areas to control them and score points.

That isn’t to say Morocco isn’t exciting. The way you gather resources is unique. Those resources restrict which areas you can place your workers. And when sections of the market close, the workers “overflow” into adjacent areas changing how those areas are populated. There is a lot going on in a relatively simple game.

The second main area of the board is the rooftop. Here, one of each color information cube (there are 5 colors) are placed on the rooftop sections with the rooftop pawn.

Each player also receives 12 assistant meeples, 2 tourist meeples, and 2 bodyguard meeples. The bodyguards are, obviously, much larger than the normal assistants. The tourist meeples look to have six arms each–I’m not sure what that has to do with tourism but they are definitely easy to tell apart.

Eagle-Gryphon’s production of Morocco is really well done. While there isn’t much in the way of artwork, the materials are all top-notch. The meeples and information tokens are brightly colored and give a little bit of visual appeal on an otherwise drab market board. The biggest miss for me was the rulebook. There were just a few key rules – namely what happens to tourists and bodyguards after you use them – that were hard to find and led to my first play not being exactly correct.

Once all players have moved the pawn, play continues with the “Assign Workers” phase. The market board, as mentioned, is a 5×5 grid. Each row and column is assigned an information cube of one of the colors. In turn order, players can discard 2 information cubes to assign a worker to the square where those colors intersect. So if you discard a brown and orange cube you can place a worker in the square intersected by the orange column and brown row. There are four spaces in each stall and you can place your worker in any available space.

Players also have a few special workers that can be placed twice throughout the game. Both cost an extra information cube, but have powerful abilities. The tourists, once placed, can be moved to an adjacent market square when the market they are in closes. Players also have two cousin tokens. These allow the player to place an assistant, as normal, and then an additional assistant in an adjacent market stall.

After all workers had been placed, any full market stalls close. Players will take the juice seller tokens next to their space (if any) and score additional points for having the most assistants in that stall. The player with the highest number of assistants scores 5 points and gets to place their colored market tile. The player with the 2nd most gets 2 points, and 3rd most gets 1 point. However, the 2nd and 3rd place players get the choice of 1 gold coin or to gain one of their bodyguards.

These bodyguards can be played as normal but count as 2 assistants. Gold coins are extremely valuable. They count as a victory point at the end of the game, but can be discarded to swap the placement of the information cubes in the market row or market column.

The market tiles show an arrow in one direction, and whoever placed the market tile can determine which adjacent market stall to point that arrow at. This signifies the “overflow” from the closed market stall moving to that adjacent stall. Each overflow reduces the number of assistants required to close that stall in the market.

Once 5 or less market stalls are open at the end of the round, the game is over. Players score points for the juice seller tokens, their stalls throughout the game, and a bonus three points for each market tile in their largest contiguous group of market tiles. The player with the most points wins.

There are a couple really neat things going on in Morocco. The information cubes that you have available to you really drive where you can place your workers throughout the game. The pentagram-rooftop mechanic is neat as your opponents can never completely lock you out of getting a certain color if you desperately need it. However, being more flexible in which colors work for you mean you can often gain some efficiency.

The ability to change which color is associated to a given row or column by spending a gold coin can really add a mean element to the game. At least with my game group it was most often done to prevent someone later in turn order from being able to assign their workers in the way they had planned to. This can lead to some bitter moments… and of course it doesn’t make much sense thematically, but that’s not the point. The fact that you only get gold coins by coming in 2nd or 3rd when a market closes makes it a slightly disguised catch-up mechanic.

Perhaps my favorite part of Morocco is the overflowing of the closed market stalls. With a few well timed placements, you can close a market stall, overflowing it into an adjacent market stall that will now close and overflow into another one that may close…etc. Area control games often lack a lot of “Whoa!” type of moments for me. You place people and it is fairly easy to see who has the most people and is going to score those points.

While it still isn’t hard to see it coming, there were at least a couple of times I was surprised to see multiple stalls close in a row when I wasn’t expecting it. The juice seller tokens being shared by multiple stalls means that if one closes before you thought it would, it can take points right away from you if you were planning on closing a nearby stall.

Surprisingly I thought Morocco worked pretty well at all player counts, even with just 2 players. Traditionally I haven’t enjoyed area control with small player counts; it often devolves into each player just completing areas on their own. However, the large bonus in Morocco for contiguous market stalls meant we really tried to cut off routes for each other in a 2 player game. This small scoring requirement led to some really interesting decisions with 2 players.

There is quite a bit going on here that I just didn’t expect when I first opened up Morocco. It took about halfway through my first play for it to really click and to see the intricacies within the game.

All of these relatively minor twists add up to a really neat game that I really enjoyed. While I dismissed the lack of theme earlier, it can be a real problem convincing people to play a game with no theme or interesting artwork. It’s a tough sell. But if you can convince a group to sit down and play, I think you’ll have a good time with it.

Final Score: 3.5 Stars – While it may be lacking in theme, Morocco presents an area control game with some unique twists.

Hits:
• Resource gathering mechanic was interesting
• Overflow of market stalls could lead to exciting turns
• A lot of strategy in a fairly simple set of rules