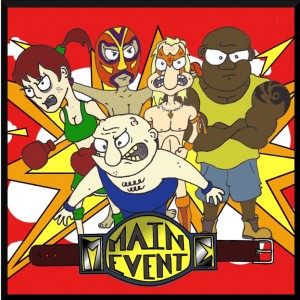 I will admit something I never thought I would put down in written form. I was fan of World Wrestling Entertainment for a short time. It was in college and my roommate had been a fan for years. He would watch every Monday night and I happened to be there at the same time. I slowly went from avoiding the TV to avidly watching. I knew it was all scripted, but I still found enjoyment in watching the ridiculous things that happened.

When I first saw the premise for Main Event, those memories of folding chairs and broken tables flooded my brain. In Main Event, players will take control of one of five fighters looking to win the coveted champions belt. They will have to time their actions well to get the upper hand versus the other players to be the last person standing. Let’s get into the preview to see if it is a game you would like to support on Kickstarter.

Main Event is a combination action programming and deck building game. At the start of the game, each combatant has twenty hit points at their disposal and will get an identical collection of cards that gives them the ability to attack, dodge, block, and even grapple with characters. Each round, players will choose two cards and perform the actions associated. As the game progresses, players will add to their starting deck special actions, items, and many other questionable moves to perform on others in the ring. Play will continue until only one player remains to taunt his victory over his fellow players.

Each wrestler has a character card that will be placed in the center of the table. Because of the limited space in the ring, players will only be able to attack the character directly to their right or left. After setting up each players damage counter and shuffling the different decks of cards the game can begin.

Each round will have the same six steps:

These six steps will repeat until only one player remains and they win the game.

Main Event has two of my favorite game mechanics: deck building and action programming. The game starts out with a simple set of action cards, but evolves during the game as you add cards that give you a variety of useful things. It is this variety that keeps the game vibrant even after many plays. You never know exactly what you will get out of the Main Deck as you progress through the game. Players have to adjust to what they are given. I could see that by pure randomness one player could have a distinct advantage, but in the games I played there is enough counter cards that mitigate that possibility.

The action selection isn’t anything new but it functions well. What I enjoy most about the mechanic is the anticipating what the other players will do. It adds a tactful element to the game. One thing I like about Main Event is that you are only concerned with the people to your right and left. This makes your decision making a little easier by only focusing on a few fighters rather than the whole group.

The game is very easy to teach to new players. None of the cards are overly complicated and all of the actions connect to the theme. While I don’t always enjoy player elimination in games, the player elimination in Main Event doesn’t diminish the experience. Each game, characters had similar hit point totals with no one running away with the victory. Players are sure to spread out the damage to not let this happen. The game also has a nice balancing mechanic where players who are at the lowest hit points are allowed to add two cards to their discard pile. This gives players a chance to use those unique cards more frequently and level the playing field.

In my experience the game plays best with three players because you are able to attack everyone in the game. The game plays fine at the other player counts, but I like being able to affect everyone in the game rather than the two people next to me. One last mechanic I liked in the game was the way initiative order is handled. Using the random draw of Initiative Chips rather than next person clockwise makes the game feel more chaotic in nature, much like a wrestling match.

Overall, I enjoyed my time with Main Event. It combines elements from deck building and action selection with a fun and light hearted theme. It take very little time for players to get accustomed to the rules and start having their characters hitting the others with fire extinguishers and folding chairs. Each game of Main Event will be its own unique battle with different items and effect cards getting into players hands and out onto the table. If this game sound like something you would enjoy please consider giving it your support on Kickstarter.

If you’d like to become a backer, pledges start at $29 the full game and stretch goals. Main Event is scheduled to be in backers hands in November of 2015 and you have until Thursday, April 23nd to become a backer. Head over today and check it out.