Lost Woods is a map exploration game where lost adventurers collect weapons, potions and spells to defeat enemies for gold. A light game for families and gamers of all ages that is easy to learn and fun to play. 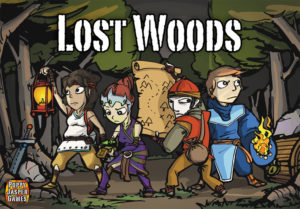 My family loves to play board games. Well, let me say my kids and I love to play board games. My wife needs some convincing to play games; she only really likes lighter games. Her ideal game should not be real thinky, easy to learn and fun because it’s an escape. Well it’s hard to argue with her– trust me I’ve tried.

Today we look at Lost Woods from Poppy Jasper Games. It’s a map exploration game where lost adventurers collect weapons, potions and spells to defeat enemies for gold. Is Lost Woods a fun family game that my wife will play or is it just me and the kids again? Read on!

Lost Woods is a map exploration game for 1-6 players and plays in about 60 minutes. It plays best with 4 players.

Players wake up in the middle of the Lost Woods. Each turn, players may move along the map or build unexplored areas by drawing a map card from one of the decks: North, South, East or West. Map building leads players to new weapons, potions, magic spells, pesky gold stealing gnomes and enemy battles for gold.

Lost Woods comes with many different components, all of which are of great quality. I initially had a gripe about wanting thicker map cards but then I realized that you need to shuffle these before every game. Yes, you need to be careful when moving your adventurer because the map cards can slide, but it’s not a big deal. If a thicker stock was used, then I think it would have been a mistake because the thicker ones do not shuffle well. So, good job by the designers for making the pieces hold-up for multiple uses.

At the heart of the game there is a level of humor added to most of the components and I love this. At first you sort of do a double take but then it becomes apparent that there’s an element not to be taken seriously and it adds to the game play. Many an adventurer couldn’t wait to explore to find a new funny weapon like a broken baby bottle, paper towel roll, infamous pointy stick, or battle enemies such as a gold-fish, flying monkey or my personal favorite, a land shark with boxing gloves.

The last thing to note is that additional components were included as well for variant rules and game expansion. The Survival Spinner was added for the cooperative 1-3 player option and additional map cards were added for the Big Map variant. The designers didn’t skimp on these components and all fit with the base game seamlessly.

The person who recently built a campfire goes first and each player turn has the following three steps in order. Steps can be skipped.

1. Move: A player can move 0-3 spaces across map cards that have been explored. Each map card is considered 1 space. As a player moves, they can pick things up on spaces they move through.

The player then draws a tile from the tile bag and resolves it. There are 6 tile types: weapon, enemy, gold, plus two, gnome and potion. The player can choose to pick-up the weapons, gold and potions. The plus two means to draw two more tiles and the gnome takes 1 gold from the player with the most gold and gives it to one with the least.

3. Attack: If a player is on the same map card as an enemy, they can choose to attack. The player selects one weapon or spell in their inventory. Each weapon, spell and enemy has a number that corresponds to a die. Each rolls that die and if the player rolls higher than the enemy, it’s defeated and the player receives the number of gold pieces on the enemy tile. If there’s a tie, nothing happens unless using a spell. If the enemy rolls higher, then the player drops either the selected weapon or a gold piece on the current map card and is moved back to the camp card.

The game ends when either a player moves past the map card marked with an “exit” or when the there’s no more places to explore. The latter is rare, but the map can sometimes close in on itself and not provide an exit. The player with the most gold pieces wins.

Other things to note:

Spells: there are 8 magic wells that can be found on map cards. A spell is a single use and once used it’s returned to the magic well on the corresponding map card.

I have to say that my kids and especially my wife liked playing this game right out of the gates. The lighter game play and strategy fits right into my wife’s wheel house. She liked that it was not real thinky and it was easy to learn. My kids enjoyed the randomness of the maps cards, dice rolling and tile drawing. They were rather excited to see what was to come next. My family also laughed throughout the game as they pulled funny map cards or tiles.

Lost Woods, being both light on strategy and decision-making, makes it ideal for gamers not wanting to play a heavy game or when you are looking to ease new gamers into the gaming world. Any gamer old or new will master the player steps and game play fairly quickly.

My family, like most gamers, also liked that there is little downtime in Lost Woods. If game play slows at all, then you’re still engaged watching other players to see where they go or what they draw or roll. You will also be interested in seeing what they might drop. Our turns flew by as we watched the Lost Woods being explored or enemies battled. This is not a game that dragged and most of our turns were short because you only get three steps/actions and some can be skipped if you choose.

Personally, a negative for me is the amount of chance Lost Woods relies on. Now my kids and wife didn’t mind but it was too much at times for me. Aside from deciding where to move, you’ll rely mainly the luck of the draw from the map card decks or tile bag and randomness of dice rolling to battle enemies. It can deflate you as a player when you have planned and tried to maximize your chances only to be undone by a bad draw or roll.

I think what serious gamers will view as a negative and turn them off is the light nature of the strategy and randomness of the game play. Some gamers want that mid-heavy strategy game for a mental challenge and prefer much more thinky games. Heavier games also don’t rely so much on chance and randomness. Those games usually let player’s decide their fate positively or negatively through their own choices and decisions. Lost Woods will likely be too light and random for those types of gamers.

The last negative aspect for me was the low player interaction. Aside from using a potion to modify another player’s roll or the Transmute spell to steal an item, there’s really no player interaction in the game play. There is the rare time when the game ends and players have to fight each other in case of a tie, but that did not happen in any of my plays. I would have preferred more interactions throughout the game as a whole.

Poppy Jasper Games did a good job in creating a fun and humorous exploration game. It’s easy to learn, has minimal downtime and is light for families and gamers alike. Serious gamers looking for heavier fare might be turned off by that, but I think it does make for a good gateway game. Most new and light gamers will be able to pick up the game play and master it quickly. Luck is a factor for all players and there’s low player interaction but not all players will mind this.

I think most gamers looking for a fun light game will like Lost Woods. My kids and wife want to keep playing Lost Woods so it’s staying in our collection for the foreseeable future.

If you are interested in getting a copy of Lost Woods, you can pick it up for about $45.

Final Score: 3.5 Stars – A humor filled map exploration game for families and gamers of all ages. This game is for who is looking for something light on strategy and heavy on fun.