We review Gnomi, a quick playing card game about Gnomes. In Gnomi, players are trying to be the last player with cards still in the hand, with simple rules, players can jump right in and start playing. 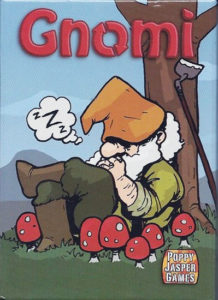 A Renaissance era scholar named Paracelsus first introduced the concept of gnomes. He described them as earth elementals standing about a foot tall, and able to move through solid earth at will. For the gnome lover in the family, there’s a new game from Poppy Jasper Games called Gnomi.

Gnomi is a hand management card game for 2-6 players that takes about 10-15 minutes to play. It plays best with 3-4 players.

Gnomi revolves around players controlling what appears to be a family of gnomes harvesting a specific group of mushrooms. Players use their mushrooms and gnome powers to steal mushrooms from one another. Once only one player remains with cards that can be activated, that player wins.

The cards that come with Gnomi are fairly standard with nothing special of note. The art is passable, erring on the comic side, with a lighthearted Smurf-esque spin. The main compliment that can be made goes to the box. It’s sturdy and well designed with a magnetic snapping closure. This is a nice addition for such a small game.

Players are dealt a hand of three gnome cards and four mushroom cards to begin the game. Each player takes a turn and play passes continuously to the next player. On a player’s turn, they have the following options:

Reveal one or two mushroom cards:
By doing this, a player can take a single color mushroom (for a single mushroom revealed) from another player or a random mushroom if the player revealed two mushrooms. The mushroom card(s) a player reveals are rotated 180 degrees in their hand so that the Trash Can (compost) symbol is now at the top. These cards are unable to be activated again.

Use a gnome card:
The special abilities of gnomes can do various things. Some simply cancel other cards, while others will allow a player to take more than one card from an opponent. Once a gnome card is used, it is similarly rotated with the sleeping symbol upright.

Pass:
Do nothing and rotate any card.

Play continues until only one player has playable cards (not rotated).

The simplest place to start is the depth of gameplay. The game advertises itself as for ages 12+ but this is a really light game with the complexities of Go-Fish and Uno. There is reading required to understand what the cards do, but there’s only a modicum of strategy. For many gamers, this may be just what they’re looking for.

The other problem is the randomness of the gnomes in a player’s hand. Since players never receive new cards, the “you get what you get” adage needs to be spoken here. And that can be annoying at times, especially when play opportunities never come about for certain cards.

The gnome powers are sometimes interesting. There are decisions to be made about when best to play a card, but really, there isn’t much to dwell on. Also, there are powers that are just variations on other powers, so the variation isn’t as much.

The last thing to mention is that this game does have player elimination. It’s really not that big a deal, but with games at higher player counts (5 or 6), the game can go longer than it needs to. Sticking with smaller groups alleviates this, but the game is really not that intriguing as a two player game.

Player elimination, randomness, and a light, comic style of play. This reviewer isn’t feeling it. There was hope to find a gem in a small box, but each play of Gnomi was less interesting. Players with a deep Gnome fascination may love it, but if you’re looking for more depth, keep looking.