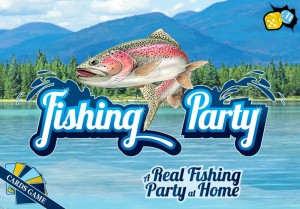 Fishing has always been a part of my family’s life. Fishing was an activity we did either at a local lake or at my grandparent’s cabin in Canada. I always found it a relaxing time to sit back and even on days where the fish were not biting, it was better than being stuck inside. Today’s review is of a game that aims to bring that same fishing experience to your gaming table. Fishing Party is a card game where players are trying to earn the most points by catching fish at the local lake. Will this game live up to the tagline “A Real Fishing Party at Home”? Read on.

Fishing Party is a card and dice game for 2-5 players to compete in around thirty minutes. In my experience, the game plays best with three or more players.

In Fishing Party, players start out with a rod card and a handful of cards. These cards contain fish, lure, spare fishing rods, and special cards that can help you land the big one or hurt your opponent. Players will need to use the proper lure and roll the right number to catch a fish. It is all a race to be the first to land one of each fish type to end the game. Points will be awarded to players with the highest total weight of their catches, as well as having the largest of each type of fish. The player with the most points at the end wins the game.

The best thing about the components is the color of the die in the game. It has a light blue with some white mixed in that gives it a true water feel. The rest of the components are perfectly fine. Cards are of nice quality and the rulebook is well organized. I do want to mention that I like the artwork on the cards, but the iconography fills up too much real estate. This makes them look crowded and busy. This doesn’t make the game unplayable, but wish they could have chosen another design.

The cards in the game have two deck colors. Both decks are used in a game of Fishing Party, but the blue backed cards can be separated out to use as a normal deck of playing cards. This allows you to enjoy the artwork while playing poker or any other traditional card game. At the start of the game, each player will get a rod card and place it in front of them. Finally, six cards are placed face-up on the table for players to draw from during their turn.

On their turn, players will have the option to do one of the following actions. A player may also place a lure card before taking one of these actions. In order to attempt to catch a fish, a lure card will have to be in play that is able to catch that species of fish.

The fourth option requires a little more explanation. If you have the proper lure to catch the fish card you just placed on the table, you roll the die. On each lure card, there will be the required number needed to catch a fish of that type. If you do not, the lure remains on the table and the fish card goes back into your hand. If you roll the required number, you put that fish card into your fishpond. Your fishpond can only contain one of each species of fish. You can try to land a bigger fish of a type you have already caught and if successful discard the smaller fish.

After you have completed one of the four moves above, you draw back up to six cards and it is the next person’s turn. This will continue until one person has caught all six types of fish. Once that occurs, the end-scoring phase happens.

Players will earn points depending on three factors:

The player with the most wins the game.

One of the reasons I was excited to try this game out was that it had a fishing theme. Besides Go Fish!, which beyond the name has nothing to do with actual fishing, I couldn’t think of a single game where fishing took center stage. In Fishing Party, the game is all about landing fish and it does a nice job doing that.

I admit I was not sure how well it would do that because the game is rather random. You have to wait until you get the right lure and fish cards in order to even attempt to even catch a fish. There were times when I was forced to just keep cycling cards until I was able to finally get that fish or lure card I wanted. Not only do you have to deal with that, but there is also the die roll that has to match the numbers for the fish you want to catch. After playing the game, I realized that thematically having random elements makes a lot of sense. However, I wish I could have had more control of what fish I could go after rather than just searching a deck.

Fishing isn’t an exact science and anyone who tells you otherwise is a liar. This truth comes through in the game as you keep trying to catch a fish. There is an air of anticipation as your roll that die waiting to see the result. Just like getting a bite and not setting the hook. Also, all of the cards do a lot to set the theme of this game. The lures are appropriate for the fish they are trying to catch and all of the special action cards are thing that have existed or can happen to you while you are out on the water. The special cards do a nice job at breaking up some of the repetition of the game. This forces players to find certain cards to continue to fish or giving you a major advantage.

The game moves at a decent pace. Unfortunately, when it is not your turn and you have no special card to play, you have to wait. Player’s turns move quickly enough that the game does not drag. The overall mechanics are easy to teach and make quick sense to the players I introduced the game to. There are no player aids, which will require you to peek at the rulebook for what actions the special cards grant you. I also noticed that special cards were not used as much as I thought they might. This is due to players focusing on trying to not only be the first to catch the six types of fish, but also ones of decent size. This leads me to how much I like how they did end of game scoring.

Rather than making this a race to catch each  type of fish to the end game point system, it forces you to make some decisions on which fish you attempt to catch. There is a decent range of weights for each type of fish and if you only attempt to catch smaller fish you could be passed by a player who was able to claim larger fish. You have to be somewhat selective on what you end up earning in your fishing pond. This is the only strategic element to the game, which makes this game is more for a casual audience.

There isn’t a ton of decision making for players to do. Either you are trying to catch a fish or you are searching the deck for something you need. With this few of strategic decisions in the game, this game works as a nice filler game with the right group. If you would take this game to a game night, it would not hold players attention throughout the night. I did have an enjoyable time playing the game, but it’s not going to be something I try to play all the time. In addition, I understand the reasoning behind having both Fishing Party and a deck of cards that can double as regular playing cards in one box, but I wish that they wouldn’t have done it. This causes cards to have extra information on them that they wouldn’t have needed if the cards were single purpose instead of dual.

Fishing Party is a step up from traditional card games. The game play molds well with the theme and will keep players attention throughout. Fishing Party aims to be a casual game and it succeeds at that. I wish there was more strategic elements and a few other tweaks to the game, but overall the game provides an enjoyable experience. I think Fishing Party is best suited for people who are interested in the fishing hobby. They will find more enjoyment out of the game than anyone else. If you are looking for a game simple card game and like to fish, then Fishing Party could be for you.

If you’d like to get yourself a copy of Fishing Party, you can pick it up for about $15.

Final Score: 3 Stars – A casual fishing game that brings the outdoor experience to the table, but doesn’t have enough strategic elements to be a game for everyone.

Hits:
• Does bring the feel of fishing to the table
• Nicely, detailed artwork
• Easy to teach with solid game play

Misses:
• Not much strategy
• Wish regular playing cards wouldn’t have been integrated into the game