We review Feed the Shoggoth! a fast paced card game where you play a cult faction leader trying to earn victory points by sacrificing minions to the hungry Shoggoth. But beware it may eat you if you have no Minions! 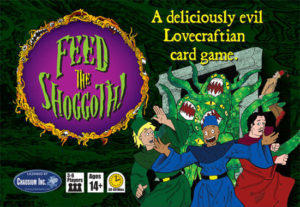 I love the Cthulhu mythos mainly because they creep me out and horrify me like nothing else. This genre crosses so many different gaming and even pop culture topics today that it could be watered down for some. But not me!

So, when Feed the Shoggoth! came into the BGQ queue, I jumped at the chance to review. This successful 2015 Kickstarter card game comes from game designer and self-publisher Badger McInnes. At first glance, this game looks like a great way quench your Cthulhu mythos gaming fix. But does it fit the genre and more importantly is it fun? Let’s find out!

Feed the Shoggoth! is a fast paced card game where you play a cult faction leader trying to earn victory points by sacrificing minions to the hungry Shoggoth. Sounds easy right? Wrong!

Other players will continually try to foil your attempts by playing spell, artifact, or action cards on you (or themselves). But beware! If you have no minions on your turn and the Shoggoth is in front of you, then it will eat you and you’re out of the game. The winner is the first player to reach the victory point goal or the last player standing.

The components that come with Feed the Shoggoth! are of good quality. All cards are cut well and are of quality stock so replay should not ware on them (though I would recommend card sleeves for any card game). The game box is small, which makes the game very portable. The rules come as a multiple fold, thicker paper. Not my favorite design, but the rules fit into the game box and continues the portability.

The Cult Faction, Spell, and Artifact Cards use cartoon-like imagery based on the classic or modern Lovecraftian fiction and games that are all too familiar for even the casual Cthulhu fan. I have to say that even though the art on the cards is humorous, it still fits the genre very well. It has that right amount of creepy even though it’s cartoonish.

My favorite component is the Minion Cards themselves. There are a variety of different color Minion cards, but the minion image itself is the same. What I like is the flavor text that was added to the bottom each card. Each card has a unique quote from the poor Minion giving a reason not to be sacrificed .i.e. “Umm, can we talk about this for a minute, sir?” These continue the humorous tone of the game and are great to distract weaker players <insert sinister laugh>.

In Feed the Shoggoth, each player gets a Cult Faction to control. After set up is complete players can take the following actions (in order) on their turn:

1. Place any number of Artifact cards in front of you from your hand. These artifacts are considered “inactive” and turned 90 degrees.

2. Turn any Artifact cards 90 degrees already in front of you from previous turns and “active” them.

3. If you wish to Sacrifice a Minion, use spells/artifacts to move the Shoggoth in front of you, if it isn’t already.

4. If the Shoggoth is in front you and you wish to Sacrifice a Minion, you must declare you’re feeding the Shoggoth and hold up one Minion card. Other players may react and foil your Sacrifice.

5. Resolve the Sacrifice. This may mean you successfully Sacrificed your Minion and you gain 1 VP and the Shoggoth moves to the next player. If you have no Minion card then the Shoggoth devours you and you’re out of the game. If your Minion Sacrifice failed, you then put your Minion card back into your hand. Other players could have foiled your Sacrifice any number of ways with Spell or Action cards or even using Cult Faction special abilities.

6. Draw back up to 7 cards and your turn ends. The next player clockwise now starts with Step 1.

Other important notes about cards: Spell and Action cards can be played at any time and player turn. Active Artifacts can only be used on the player’s turn. Active Artifact and Spell cards can be countered with other cards but Action cards cannot be countered. All cards go to the discard pile after used (unless stated otherwise on the card) along with any Minion cards that were discarded. Any Sacrificed Minions go to the Graveyard.

Feed the Shoggoth! is a fast-paced game with fairly, straight-forward rules. The game play is quick so downtime is minimal, especially since all players can play Active Artifact, Spell, and Action cards during any players turn. These characteristics make this an ideal gateway game for non-gamers and still have plenty appeal for gamers alike.

The theme of Feed the Shoggoth! is a natural fit within Cthulhu genre. You’re a Cult Faction trying to gain favor of dark gods by Sacrificing your Minions to a Shoggoth while trying to foil other Factions from doing the same. It’s a divergent path from the literature and most games in that you’re not the good guy. You’re instead an evil group trying to out-do other evil groups. It’s a dark theme but you should nonetheless take enjoyment foiling other players and fighting for victory points.

The two main strengths of Feed the Shoggoth! are the replay value and the Shoggoth card. The huge variety of the Faction, Spell, and Artifact cards help make each game experience different each time you play. You will find that the Spell and Artifact cards have a few repeated cards, but for the most part, especially with the Artifacts, all are almost completely unique. Having a different game experience is ideal for replay. I’m sure if you play this game repeatedly for days on end that you may eventually hit a wall with variety, but it was definitely designed to give players a different experience with each play.

You might be wondering if Feed the Shoggoth! is another “foil the leader” game. I think if you look at just some of the game action, that maybe true. But when you throw in the Shoggoth card, it’s definitely not the case. This card is the great equalizer for all players, either ahead or behind. It’s because if you’re devoured, then it doesn’t matter how many cards, active artifacts, or VPs you have; you’re out of the game.

You might think reading through the rules that players only move the Shoggoth to gain VPs but it can be moved to eliminate other players as well. When a player moves the Shoggoth card to another player, the mix of confusion and fear is priceless. I really loved this mechanic and it added an excellent balance to the game during our play.

Overall the game is solid but there are two weaknesses that could hurt game play: Cult Faction card abilities and the Minion Cards at lower player count. Don’t get me wrong, I love having Faction card abilities, during your turn they give each player an added advantage but the issue is that they are not all balanced. The Esoteric Order of Dagon allows you to move the Shoggoth Card during your turn and Chapel of Contemplation gives the player 1 less VP to collect to win. Both cards are very powerful.

Now the flip is Keziah Mason’s Coven allows you to look at another player’s hand and New World Inc. gives immunity to cards that steal or destroy Artifacts. So, I can look at a player’s hand, it’s helpful and my Artifacts are immune, but they are still discarded after you use them. These are lemons by comparison. You can just not use the lemon Faction cards when selecting but I don’t like have to tweak games to make them better.

The other issue is the Minion cards at the 3-4 player game. Simply put, there are too many Minion cards. You end up taking a discard turn to purge these from your hand. The game is more limiting because you take out the fear being devoured because of the Minion surplus you’re likely to have in your hand. It makes the 3-4 player more of a foil the leader game. Again, you can take out Minion cards but how many is the question. The 5-6 player count handles the volume better and still leaves that Shoggoth devour fear in the game. Overall, we avoided playing the lower player count and just enjoyed the higher count better.

I honestly enjoyed most of the plays with Feed the Shoggoth! This is a fun game to get non-gamers into with the easy to learn rules and quick game play. This will also hold any gamers attention because of the non-existent downtime and any who like the genre and unique theme as well. Plus, the humor of the cards and images still compliment the genre. If you do have a few missteps or questions, the rules are easy to reference during or after play.

The 5-6 player count hit that gamer sweet spot for my group and me. It seemed to be a more complete game with more fun and experiences. The 3-4 player count was just not as much fun for my group; it may be a better fit for yours.

The Shoggoth card mechanic is brilliant and it is the great equalizer in the game. While the Cult Faction card abilities are a great addition to the player’s arsenal, they seem unbalanced when you compare them as a whole. Some are just too powerful and others under-powered.

Final Score: 3.5 Stars – A fast-paced card game that is easy to pick-up and a lot of fun to play. I will be holding onto this one for a while.

Misses:
• Too many Minions at low play count
• Factions Cards not balanced