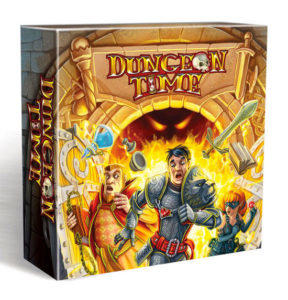 Fantasy dungeon crawlers are somewhat of a staple in our hobby. From minis based games like Descent, to card games like Lost Legends, gamers have plenty of options to choose from.

Dungeon Time is a new, quick playing card game from publisher Ares Games (The Battle of Five Armies, Sails of Glory). In this cooperative game, players must work together to complete as many missions as possible before the timer expires. That’s right, the game is played in real-time and while the rules are easy, winning is not. Dungeon Time is currently in funding on Kickstarter, so let’s take a look and see if it’s worth potentially becoming a backer.

Dungeon Time is played over two phases. In the first half of the game, players are working together to play missions and item cards into a communal stack. Players have exactly 5 minutes to complete as many missions as possible.

Once the time expires, players move on to the resolution phase, where they see how they did. Hopefully they played their cards correctly and were able to complete enough missions to win!

The rules of Dungeon Time are fairly easy to pick up. There are two types of cards in Dungeon Time, item cards and mission cards. There are 12 different items in the game (4 copies of each) and 4 levels of missions (with 12 missions in each level).

To begin the game, players choose which level they want to play at and shuffle those 12 mission cards in with the item deck. Players also each get a hero character that will grant them a special ability to use during the game. Finally, Each player draws a hand of cards (number based on the player count) and you’re ready to begin.

For this preview, we’ll be explaining the game at the normal difficulty level. Someone sets a timer for 5 minutes and says go.

Each mission card requires 3 items to complete and provides a bonus item when completed. So as the timer is ticking down, players should be announcing which items they have in their hands and which missions they hold (and what they need to complete them).

Players can play cards into a communal stack freely, there are no rounds in the game. So if you have a mission that requires a sword, goblet, and potion to compete, someone needs to add those three items to the stack before you place your mission on it. Once you’ve add your mission card, players are granted the bonus item shown on the bottom of the mission card (which will be one of the game’s 12 items). That bonus item can be used to complete future missions in the round. The trick is that players must remember what bonus items they’ve been granted, as there are no additional cards given as a memory aid.

After the timer expires, players check to see how they did. During the resolution phase, players flip over the communal stack and start drawing cards (starting with the first card played in the round). Any items are added to the player’s backpack. The backpack has 8 slots, each of which can hold 1 type of item (and 3 copies of that item).

As players add items to the backpack, eventually they will draw a mission card that was played. If the mission has all of its necessary requirements showing in the backpack, they remove those items and add the mission to the score pile, adding a copy of the bonus item the mission provided to the backpack. If the players are missing a required item, the mission was a failure and is discarded (possibly along with some items).

If the players ever get a 9th item in their pack, they bust out and lose the game.

If, after all the cards in stack are played, the players have competed enough successful missions (based on the difficulty level), they win!

While Dungeon Time is a very easy game to learn and play, I’ve found it takes at least one game for new players to wrap their head around the concepts and strategies of the game. At some point during the game, they will hit their “ah-ha” moment and be able to contribute to the strategy.

That being said, Dungeon Time is great little game. It’s not deep by any stretch, but it has quickly turned into one of my favorite filler games. The first phase takes exactly 5 minutes to compete, with the resolution phase taking about another 5. Perfect for a quick game to play while you are waiting for others to show up to your game night.

As mentioned earlier, the rules in Dungeon Time are pretty simple, but I have to say, winning is not. It took us 4 games before we finally won a game. But even with those losses, we still had a blast playing the game. Dungeon Time plays so quickly, that it easily turns into one of those “just one more game” type of experiences. This was doubly so after losing. We refused to stop until we won a game.

I’ve tried Dungeon Time at a few different player counts and found it scales pretty well. The lower player counts are less chaotic, but I found myself having a harder time finishing missions. That could be because, with 2 players, each player has 7 cards to keep track of, plus what’s in the stack. With more players, you have a lot more brain power to remember things.

The hardest part about Dungeon Time has to be remembering what has been played into the stack. Missions provided a bonus item, which can be really helpful, but if you forget which bonuses you have before you use them up, it could spell disaster during the resolution phase.

More than once we failed to win because we miscalculated what bonuses we had hanging around in the stack. But that’s part of the charm of Dungeon Time, it’s quick, cooperative, and quite the challenge, especially at the higher difficulty levels.

I ended up having a lot more fun with Dungeon Time than I expected. I love the realtime nature of the game, and also the coordination that’s required because of it. While Dungeon Time isn’t going to impress anyone with its depth, it more than makes up for it with its sheer fun and craziness.

I think Dungeon Time will become my go to filler game once it’s published. More than once I’ve used our prototype copy to pass the time while waiting for others to arrive to our game night. This one is definitely worth checking out.

If you’d like to become a backer, pledges start at $25 for the full game and stretch goals. Dungeon Time is scheduled to be in backers hands in December of 2016 and you have until Thursday, July 14th to become a backer. Head over today and check it out.