Board Game Review By: :
Brian Winters

We review Zombie Tower 3D, a semi-cooperative game where you will play a character trapped in a building crawling with zombies. Your goal is to be sure the other characters and you find key items to escape and along the way collect other items and survivors for VPs. 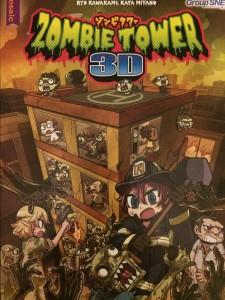 There are many who think the zombie theme has over saturated the gaming world. Honestly, its frequency doesn’t bother me mainly because, to me, a game’s theme is secondary to the actual enjoyment of the game itself. Sure, a theme can catch your attention, but if the gameplay falls flat, no theme will help make it back to the table.

Today, we are going to look at the zombie themed semi-cooperative game Zombie Tower 3D from Cosaic and Group SNE. In Zombie Tower 3D, you are a character trapped in a building crawling with zombies, trying to save survivors and escape. Sound like something you can sink your teeth into you? Read On!

Zombie Tower 3D is an action point based semi-cooperative game for 1-4 players and plays around 45-60 minutes. Zombie Tower 3D plays best with 4 players.

In Zombie Tower 3D, you’re trapped in a building filled with zombies and you’ll be trying to save survivors, find various items, and, of course, escape. To make matters worse, the building is collapsing and limiting where characters can go. Players are not able to see the other characters are but you can talk and pass item cards through small gaps in the rubble. If all players are able to meet the escape conditions, then they all escape and have survived. The real winner though is the player with the highest VP from survivors and the Minor Objective Cards.

All of the Zombie Tower 3D components are pretty solid. The centerpiece of the components is the 3D game board tower that can be built for 3 or 4 player games. The board is essentially a divider between players so they are not able to see other player’s characters. The board makes players communicate what happens on their turns and that enhances the player interaction.

The tower itself is slightly wobbly when you move zombies and characters, but I think this adds to the whole collapsing building motif. The best part of this 3D tower are the wall slits where players can pass cards. This was a slick feature to enhance the gameplay and add to the game’s theme.

All game cards are high quality and have great illustrations that tie perfectly into the overall theme and gameplay. Even the character punch-outs and zombie/survivor chips again have excellent art that continues to carry the game’s theme.

Aside from the tower, the other piece that I really liked was the summary reference sheet. Each player will have one and it’s a two-sided guide for players to refer to the game play, the escape criteria, and a reminder on how to lose the game. The other side of the card gives a full break down of all the search and beginning starting cards and more importantly on which floor of the tower you can try to find them. Overall, it’s an excellent reference and aid for players.

Once the game is set up, players then decide if they want to start their first encounter easy, normal, or hard by randomly placing zombies and using their emergence deck for the zombie placement.

After a starting player is chosen, the game begins and it’s made up of 4 phases:

Players may also do the following actions at a 0 AP cost:

Clearing the Tower: There are two ways to successfully escape the Tower:

Secret Passage: If each player has a vaccine, one player has communication device & battery, and all players end the round in Room 10.

Helicopter Rescue: If each player has a vaccine, the players find flares equal the player count, and all players end the round in Room 2.

Losing the Game: The game immediately ends if any of the conditions happen:
1. If any PC is dealt damage equal or more of their life on their character sheet.
2. If any PC ends a round in a room with fire.
3. If the emergence deck runs out a second time.

If you’re not a fan of the whole zombie game theme, you might avoid Zombie Tower 3D and unfortunately miss out on a very fun cooperative game. Let me get this out of the way and say that Zombie Tower 3D does a great job supporting the game theme. From the art and the many decks, and to the tower itself, you are deep in a zombie apocalypse trying to stay alive.

The game play is lots of fun and player interaction and communication is off the charts. You’re not allowed to see another player’s character sheet or hand, but each player should be actively discussing many aspects of their turn, including character health and things they find (unless they want to bluff). There are some search cards which say “Announce Immediately” and you MUST tell the players what you find.

Now with the social aspect of Zombie Tower 3D, you do need to be sure that you have the “right” players who want to play a game like this. If you have any players in your group who just want to push cubes and just roll dice, then it’s a pretty good chance that your group will lose and miss out on the social and cooperative nature intended for this game.

Overall, as you can tell from the How to Play section, Zombie Tower 3D is challenging to win. The search cards marked “Danger!” and all the zombies popping up will constantly try to hinder and whittle the players down. It seems at the start of the game that your character can easily move around and fend off zombies but as the game goes on, that feeling will change and you’ll do whatever you can to stay alive.

That does bring me to a negative, after you’ve played Zombie Tower 3D multiple times, and tried each of the five characters, the game can feel repetitive. Zombie Tower 3D could use an expansion to increase the escape conditions, add characters and items, and different minor objective cards. It should help give some variety to the gameplay.

The last things to note are minor objective cards. I’ve noted that this is a semi-cooperative game because of these cards specifically. Sure, you want your group to meet either of the two escape conditions, but you don’t want to do that at the expense of your potential VPs. If you hold onto an item for minor objective VPs and don’t give it to another player who needs it, that’s ok. They can hopefully release survivors and lessen their potential to be the real winner and all the while you try to secure your VPs for victory.

Zombie Tower 3D comes with a unique and cool game board. This semi-cooperative game has high player interaction, an excellent supported theme and quality components. You will need the “right” players to enjoy this game and after multiple plays it can feel somewhat repetitive.

While some players might not like the zombie theme, I have to say it again that I think most will definitely have fun with Zombie Tower 3D. If you are a fan of cooperative games, zombies or not, then Zombie Tower 3D is absolutely worth checking out. I think even zombie haters will be surprised how much they enjoy it.

If you are interested in getting a copy of Zombie Tower 3D, you can pick it up for about $50.

Final Score: 3.5 Stars – A well-built semi-cooperative game with high player interaction. The game could use an expansion to increase variety in-game play but easy to learn and fun to play nonetheless.

Misses:
• Need the “right” players to play
• Can feel repetitive