We review Zendo, the abstract strategy board game published by Looney Labs. In Zendo, players are trying to guess the secret rule that only the moderator knows by examining the structure created. 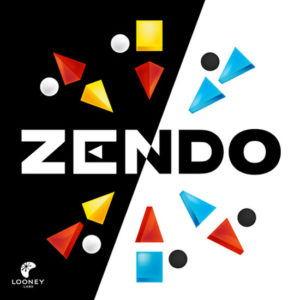 Zendo from Looney Labs, released originally in 2001, is a game where one player knows the secret rule and players race to determine what that rule is. This is accomplished through the building of structures. Pieces are similar to those in Looney Labs’ Pyramid Arcade, but also include wedge and block shapes to increase the number of options available to build from.

Zendo is a 2-5 player game that takes about 20 minutes. It plays best with 3-5 players, are the 2 player version is a variant that changes some of the key rules.

In Zendo, one player will act as the mediator, building a structure out of plastic parts that meets a very specific rule. There are pieces in three different shapes (blocks, wedges and pyramids) and three different colors (red, blue, and yellow). The rule may be something as simple as “must include at least 1 blue shape” or as complicated as “must contain one red shape on top of a blue shape.” You can even forego the included rule cards and make up your own rules if you feel the need.

If you make a correct guess after spending your cube, you win! However, if the rule you guess isn’t correct, the moderator must prove you wrong by making a structure that meets the rule but doesn’t meet your guess, or meets the guess but doesn’t meet the rule.

The rules for a 2-player game differ slightly as players take turns being the moderator. There are no quizzes or guessing cubes, you simply build structures until you can solve the rule. You then calculate your score based on the number of structures you had to build and any incorrect guesses you made along the way. After both players had a chance to moderate, the one who solved the rule most efficiently wins.

A game Zendo is really hard to wrap your head around. Trying to decide when to try to go for a quiz, rather than just getting more information, is about the only game element going on here. It kind of an interactive puzzle where it can be more fun to just work through it than to worry about who is going to win or lose.

There are, undoubtedly, a lot of great applications for something like Zendo as an educational tool. It is pure inductive logic and folks that really understand how to narrow down the possibilities will be able to do well. Computer programmers will certainly feel right at home.

Playing as the moderator, there isn’t much you get to do. Depending on how elaborate you build your initial structure, you can make it slightly easier or more difficult for the players. You also get to build structures to prove their guesses wrong, which gives you an additional opportunity to influence how much information they have. I expected moderating Zendo to be way more enjoyable than it actually was. The moderator just kind of sits there and hands out discs.

The games don’t last a terribly long time though, so your chance to let someone else moderate so you can play should come around swiftly. Attempting to guess the rule is quite enjoyable. You try to maximize how much information you get for each structure you build. However, all the info you get is also available to the other players so you have to be cognizant of what they are doing. Often times you can figure out the train of thought other players are going down by evaluating what they are building.

That said, if you have a particularly sadist moderator, the game can get incredibly difficult and last quite a long time. The rulebook gives options for how to deal with situations where no one is able to guess the rule within a reasonable timeframe, but it puts the onus largely on the moderator to help out. With my group that is often very competitive, it wasn’t easy to bring games to an end quickly.

In general, I’ve enjoyed playing Zendo. There are dozens of different rule cards, each with multiple options to select, so there is a near endless supply of rules you can use. In that respect, the game has quite a bit of replay value. It sometimes feels a bit like a brain teaser though. It is fairly short, yet I don’t find myself wanting to play Zendo more than a couple of times before moving on to something else.

I think it teaches an extremely valuable skill to folks though. Logical reasoning is a powerful tool with practical applications. If you have a desire to use Zendo as a teaching aid of sorts, it works wonderfully. As a puzzle it can be enjoyable in short spurts. As a game, it falls a bit flat.

Final Score: 3 Stars – A fun activity that doesn’t always work as a game. It is a good educational tool, but can quickly wear out its welcome.

Hits:
• Well produced game with variety of plastic pieces to build with
• Huge number of combinations of secret rules
• Can be educational tool in inductive reasoning