We review Yogi, a quick playing and easy to learn party game published by Gigamic games. Yogi will bring back memories of Twister as players must contort their body if they hope to stay in the game. 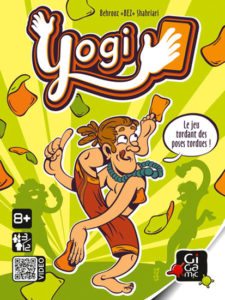 I can still remember the first time I played Twister as a kid. We thought it was hysterical to get into weird poses and then shove each other over in an attempt to be victorious as we played in between rounds of NES games. We were rather lucky that we didn’t get in trouble, or a torn ACL, from all the roughhousing.

These days, I am not as interested in close contact with my friends, and the threat of damaged ligaments is higher than ever. Enter Yogi, a game that promises all the silliness from contorting your body into funny poses, without the danger of bodily harm. Does Yogi get settled into its pose, or does it miss the mark? Read on to find out.

Yogi is a dexterity card game for 3-10 players that plays in about 15 minutes. Yogi plays well with all player counts, but best with 8-10.

In Yogi, there are two types of cards. Green cards provide players directions to follow, such as having a finger touching their nose, the right thumb up, one arm up in the air, and so on. Orange cards have a placement – such as the card touching a left eyebrow, right ear, or other body parts.

Each turn, a player draws a card, reads it, and immediately begins following the directions of the card, while continuing to obey previously drawn cards, changing positions and twisting their body as needed. If a player stops following a card’s instructions, even for a moment, they are eliminated from the game. The last person to remain in the game is declared the winner.

Yogi is extremely light in rules and in gameplay. It takes about a minute to set up the game and explain the rules before allowing players to jump right in. The cards are very descriptive with their instructions, and for young children who may not have the best reading skills, there are cartoons on each card that provide a visual description.

Games play out exactly the way the game promises they will – with awkward poses from everyone and laughs all around. The moments with the most fun ended up being when players had to contort themselves due to conflicting instructions like “right elbow above head” and “right hand on knee.” Some of us with mobility issues were not as successful as the flexible types, but it did not take away from our enjoyment of the game.

One of the positives of Yogi is that you can bring it to a game night or convention and play with strangers because you do not need to touch them in order to play. For those of us who have observed and experienced the hygiene habits (or lack thereof) in society at large, this will come as a relief and a bonus to the game. Depending on who is playing, however, you may want to give the cards themselves a quick wipe down after gameplay.

Yogi gives players all the fun and nostalgia of Twister, updating it for the modern hobby gamer audience while not requiring people to come in contact with each other. Easy rules and quick gameplay make Yogi great for family game nights, meetups at bars or convention play.

Final Score: 3 Stars – A solid game for families to play on a weekend afternoon or a bunch of adults to play in the early morning hours.

Hits:
• Quick and easy to set up and explain
• Great for families
• Do not have to touch other people

Misses:
• Some artwork could be improved for clarity and quality