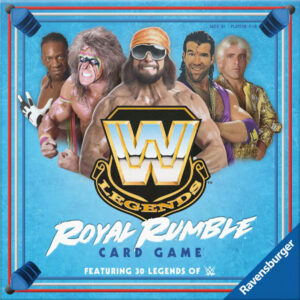 WrestleMania VIII. Indianapolis, IN. March 1992. I was there.

For the next several years I would talk about that evening as the best day of my life. The Undertaker against Jake “The Snake” Roberts. Bret Hart taking on Rowdy Roddy Piper. Macho Man defeating Ric Flair for the title. And some nonsense DQ finish in Hulk’s “last match.”

Since 1992 my love for professional wrestling has waned, despite the memories. Today though I get to relive all those memories as we play WWE Royal Rumble card game.

WWE Royal Rumble comes with 30 playable legends spanning almost the entirety of the organization’s history. As far back as Ravishing Rick Rude to current day wrestlers like Batista. The vast majority seem to be from that 90s era though, hitting me right in the nostalgia.

You won’t take a legend and play them the whole time. This is the royal rumble, after all. But each player will start with a legend and their signature move (the leg drop for Hulk, for instance) and a handful of action cards. Each round you’ll choose an attack action and choose which opponent you are going to attempt to hit with your move. Each attack has a speed, some damage, and potentially an additional ability.

All moves are then revealed and the actions take place in order based on the speed of the attack. If a legend sustains damage that is equal to their health, they are knocked over the top rope and eliminated. The player who knocked them out takes the legend card as a trophy and the player who was eliminated takes another legend from the deck and starts with them.

Some moves are illegal moves—steel chair anyone? If you play an illegal move and any player responds with a Ref! card, your attack is canceled.

Play continues until only one legend remains in the game (the number in the deck changes based on the number of players). According to the rules, the last legend wins the Royal Rumble but the player with the most eliminations gets bragging rights.

Let’s be honest, WWE Royal Rumble card game is hoping to get a lot of impulse buys from folks like me that look back fondly on people like Hacksaw Jim Duggan. And for that niche, it works extremely well.

You’ll get to deliver dropkicks with Bret Hart. Have the Ultimate Warrior clothesline Andre the Giant… somehow. If you have any connection to these characters it’s very hard to not get into it. It’s a testament to both the design of the game and the power of professional wrestling that you can visualize this Royal Rumble taking place when you are just setting down some cards on the table in front of you.

Now if you’ve never watched a wrestling match you may be less interested in what is going on here. It is very much a take-that game where the stakes are incredibly low. Heck, even the win condition isn’t particularly clear. Being the last remaining wrestler seems obvious, but it’s really about trying to accumulate the most elimination trophies. If my wrestlers keep getting eliminated, I might go through five different characters before anyone else loses their first one.

And what if you hit someone with an elbow drop from the top rope inflicting 7 damage, but they have 8 health? You are just setting up someone else to take them out with a weak little chop. If you are the type of player looking for strategy and fairness of some kind, you should look elsewhere.

If you are a wrestling fan—current or former—WWE Royal Rumble is worth checking out. It’s simple and silly but draws exactly the type of engaging narrative you’d expect. There is no way you can be using Ric Flair, have a chop attack in hand, and play it without adding an emphatic “WOOOO!”

It’s not a game for everyone. Heck, it’s not even really the type of game where you should be worried about who the winning player is. The WWE Royal Rumble card game is about having a great time and thinking back to 1992 when these larger than life characters gave you the best day of your life.

Final Score: 3.5 Stars – It’s perfect for fans who want to create a Royal Rumble with their favorite wrestlers on their gaming table.

Hits:
• Great mix of iconic WWE legends.
• Gameplay is simple but there is a vast array of moves and attacks.

Misses:
• Winning condition is very anti-climactic.
• If you aren’t connected to the characters you probably won’t enjoy it.