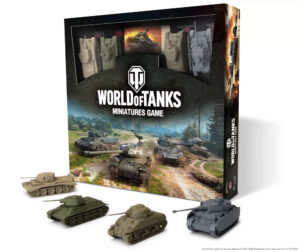 The tabletop is certainly no stranger to military miniatures games. These play experiences predate modern tabletop gaming going back into an era when hobby shops were synonymous with gaming stores. Now in 2020, the options for miniature wars are endless from ancient troops to the far future fictional(?) forces in space. And, of course, gamers with choices will undoubtedly want someplace to start.

As products go, it’s also an age where the tabletop experience might go digital and, in this next case, vice versa. The World of Tanks online battle game has beamed down to the gaming table. This incarnation of a World War II tank-based game is aimed at gamers just getting into the miniatures side of gaming. The box says it’s for 2 players, but there’s no obstacle to playing with teams of 4 or 6 players. Any more than that and it would probably not be enjoyable. And, most impressive, games take 20-30 minutes, but it really depends on how many tanks each player controls.

Players each will choose a set of miniature plastic tanks and set up the play area (a standard 36” square works for basic matches). The addition of terrain for cover and/or concealment is also necessary since tank battles tend to be uninteresting without some terrain for strategy. The core box comes with 2D cardboard groves of trees, hills, and a couple of buildings (again 2D).

Finally, players bring their loadout of choices for equipment and bonus cards for their tank(s). In most games, the contestants agree on a total point cost and then choose tanks and extra equipment for that budget. This range is usually from 80-200 for 2 player matches with tanks costing around 50 points.

Once players are ready, they’ll line up their tanks on sides of the play area and begin turns that have a Moving Phase, a Shooting Phase, and a Command Phase. During each phase, players act in a certain initiative order based on the phase and also based on the values on their Tank Cards. A Tank Card also has stats for Firepower (attack strength), Survivability (defense), and Mobility (number of times it can move).

During the Moving Phase, players activate a tank and move it a few times up to their Mobility number. Each movement is extremely easy: the player lines up a cardboard arrow alongside their tank and moves it forward to any adjacent edge as the arrow allows.

The subsequent Shooting Phase is also absent of any complexity. There’s a base amount of dice a player rolls and a checklist of bonuses to gain extra dice. Once rolled, the player totals their hits and critical hits. If each player has their own dedicated dice, this is easier since the next roll is the Defense roll where having separate dice is useful. Any successful Defense dice cancel hits from the Shooting roll. If, after this, a player’s tank has suffered a critical hit, they draw a card from the Critical deck. These provide some randomness to what has been crippled on the target tank and how much damage it receives. Other “normal” hits simply do damage.

The final phase in a turn is the Command phase. This is used for checking for Victory, giving tanks that have suffered Critical hits a chance to repair and a contested die roll for “Advantage” in case one tank’s initiative is the same as another. A tank is destroyed if it has suffered hits beyond its limit and, of course, if a player has had all their tanks destroyed, they lose the game.

After playing World of Tanks, one thing is abundantly clear, this game has one of the best, if not the best, introductory experiences this reviewer has ever seen. It’s a complete walkthrough of what to do turn by turn with explanations of each item. The setup is easy and the tutorial-like nature of it gives players a feeling of assurance that they’re getting everything right as they play. It’s also a scaled-down scenario of just 2 tanks battling it out with a modest amount of terrain. For an introductory product, this is exactly what is needed.

After that first combat, eager players will want to immediately move on to using the more advanced setup which is also included on the same page directly after the tutorial. This is basically “Play a second game but now with more options.” It’s perfect. The experience ramps up just enough to lure players in to see what more is offered if they really focus on loading out with the best options.

Since this review is only of the core box, it’s hard to get a complete feel for what else can be experienced here. There are 4 tanks in the box and players will generally want to play 2 vs 2 tanks, there’s still quite a bit to explore here and games will likely be fast and extremely tactical based on the die rolls. The tanks don’t have so many hit points that they’re likely to survive more than 3 hits, but it is possible with some mitigating equipment. What’s really missing from the experience is the 3D terrain which miniatures games benefit most from thematically.

On another note, since many tank abilities are very abstracted, it’s hard to see how additional tank makes and types can add more play variety besides offering additional equipment cards and slightly different stats. The cards seem to offer more variety than the tanks themselves. Additionally, adding crew can be a big deal between opposing players providing abilities and more tactical options.

If there is any negative, it’s minor. The game tries hard to explain cover and concealment, but even with the diagrams provided, there are still some concepts like “hull down” which require new players to go over a few times to get right. Luckily, Gale Force 9 has some excellent videos on their site to additionally explain these concepts. All in all, you couldn’t ask for more from an introductory product.

Gamers who like World War II themes and have yet to try out a complimentary miniatures game should take a look at World of Tanks. It’s the gentlest of introductions to this side of war gaming and offers solid components for the price. Even if you only want the occasional Sunday tank battle, the core box is enough for more than a couple plays. However, like many miniatures games, the included components can only go so far. Additional tanks and terrain accessories, including terrain fabric, really make the experience in World of Tanks complete.

Misses:
• Battles can end too quickly with some unlucky rolls
• Needs accessories to be perfectly enjoyable