We review Woo-Hoo!, a family freindly board game for children ages 3 and up. In this easy to play game, players are trying to move up the slide and go down into the toy chest. 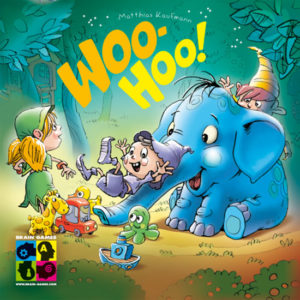 Gaming with children can be both rewarding and excruciating. Kid’s games, especially for kids in the 2-4 year old range, have to walk a very delicate line as attention spans are short. It’s great for your kid to get something out of the experience without having to end up in timeout for throwing the pieces or eating the dice.

Woo-Hoo is a game aimed for that exact age group. It starts off by putting a giant elephant slide in the middle of the table. It certainly succeeds in having a high toy-factor to pull kids in. Let’s take a look at how it plays.

Woo-Hoo has two modes of play to choose from to cater to the kids you are playing with, but both share a fairly similar structure. Players will take turns rolling a die and moving the appropriate numbers of steps up of the elephant slide. Once your pawn reaches the top, you can slide down into the sand box. Yelling Woo-Hoo at this point is optional, but encouraged.

Then in the easy version, you will choose one toy from the box and place it in front of you. If you play with the slightly advanced setup you will roll a different die to determine how many toys, between 1-3, that you will collect.

There are 20 toys, five each of four different colors. The game ends when all of the toys have been collected. If you are playing with the basic rules, you can choose the number of toys to include to shorten the game if you’d like. In the advanced game you can also win by collecting all 5 toys of the same color.

Woo-Hoo is listed as a game for kids 3 and older and that is about the perfect age for this game.

The basic game is way too basic except for maybe the youngest of kids who could play. The biggest downfall is that it almost always results in a tie, unless you seed the box with a number of toys that can’t split evenly among the players. As a parent, one of the best benefits of gaming with my kids has been to watch them learn how to be both a good winner and loser. Drawn games just aren’t exciting for anyone.

Adding the die roll to determine how many toys you can take on each trip down the slide really fixes this issue. Ties are still possible, obviously, but much less frequent. I did find trouble with the added victory condition in the advanced game. While getting all 5 of one color is seemingly an easy idea, the problem lied in my son wanting to grab certain toys–regardless of if it made sense. Even if I had four of the blue toys, if he had the chance to take 1 toy he would often take the green dinosaur or red teddy bear. Sure, he would almost definitely lose, but those were the coolest toys.

It is very simply a roll and move game, but the table presence is a big draw for young kids. Setting up a big elephant slide in the middle of the table immediately grabbed my son’s attention. It also makes it very easy for kids to count the number of spaces they can move. We’ve struggled in some games with my son knowing which direction he is supposed to go or which space is next. Using a 3D platform with stairs makes it very intuitive.

Woo-Hoo is not the type of kids’ game that has wide crossover appeal to adult gamers. But if you have young children you want to introduce into board gaming, it is a great jumping off point. While Woo-Hoo isn’t a terribly educational game, they will have to do a bit of counting and, with the advanced rules, work through a little tactical decision or two.

There is plenty of flexibility to play the basic game, advanced game, or your own combination in between to cater to what makes sense for your child. After about a dozen plays, my son Max keeps asking to play Woo-Hoo. And he hasn’t eaten any of the dice yet.

Final Score: 3.5 Stars – A good starting place to get your kids into gaming.

Misses:
• Basic rules and advances rules both have minor concerns
• May not have a long shelf life as kids graduate quickly to more advanced games