We review Wonder Woman: Challenge of the Amazons from Ravensburger. In this cooperative board game, players must work together to defend the island of Themyscira from the invading army. 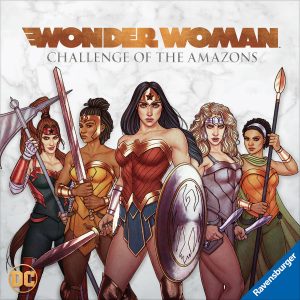 When we went to go see Wonder Woman in the movie theater, the scene where Diana steps out of the trench and charges the enemy lines brought tears to my eyes. When I looked over at Stephanie, I saw the same, and she said, “this is the movie I’ve been waiting for since I was a kid.” It is ridiculous we needed to wait until 2017 to see this iconic character starring in her own film. As a more focused take, it seems insane that it took until 2020 to see Wonder Woman be the star of her own board game.

Ravensburger’s Wonder Woman: Challenge of the Amazons puts you in the role of Diana and her Amazon companions as they defend the sacred isle of Themyscira from invasion by their enemies—will you succeed in your mission to defend this slice of paradise?

Before beginning Wonder Woman: Challenge of the Amazons, players choose which hero they will be taking the role of, each with their own unique player power. The players also choose which villain their heroes will be fighting against, which determines the fine details of how the enemy forces will spawn, advance, and attack as the game proceeds.

At the start of each turn, enemy forces will spawn and move around the map based on card draws from the Enemy Deck. Players are dealt a series of hero cards, which have different emblems that represent the number and type actions those cards allow players to take. Players can use the cards to move, attack enemies, remove obstacles, and deploy allies, depending on their overall strategy and their response to immediate threats.

Two of these cards are dealt face-up, allowing players to discuss possible strategies based on the revealed cards, but three are dealt face-down, unknown to all until after the discussion. At this point, players pick up all the cards, then select three to be played face-down. One at a time, players reveal these cards, resolving any powers or effects, then take the actions associated with the emblems on that card. After all players have taken their actions, the enemy attacks, reducing the team’s defense value depending on the presence and distribution of threats on the board.

During gameplay, players will move their characters around the map to deal with threats as they pop up but will also gain the ability to use powerful relics in their battle against the enemy. In the end, players will have to satisfy a win condition. For instance, the player who has the Sword of Hephaestus is the only one who can deal the final point of damage to Ares for him to be defeated allowing the players to claim victory. However, if the island’s defense value is reduced to zero, the enemy is triumphant as the forces of evil overwhelm Themyscira.

It’s a Wonder Woman game, not only starring the Princess of Themyscira herself, but also several characters that appeared in the comic books over the years. To say that we love to see a game with an all-woman set of characters would be an understatement, and it’s just icing on the cake to see some diversity in those playable roles as well. While the theme is one hundred percent pasted on, it still resonates well with the table, allowing players to assume the roles of some of their favorite characters from the Wonder Woman comic franchise.

Cooperative games tend to follow a pretty standard formula: odds seem stacked against the players at the onset of the game, lots of fires to put out, strategizing and economizing your actions becomes more important as the game goes on, and the difference between victory and defeat may hinge on one choice or one turn of the card. Wonder Woman: Challenge of the Amazons, does not break much new ground in this regard. As players race around the board, gameplay starts off interesting, but becomes rather repetitive. While the enemy deck tries to keep things interesting through the movement of the main enemy, things end up feeling more like a game of whack-a-mole by the time you’ve reached a few plays.

What Wonder Woman does excellently is provide an interesting spin on the cooperative genre by introducing programming mechanics and some imperfect information to the gameplay. Since players can only plan before they look at all the actions available to them, it is possible that a player may decide to alter their plans based on better cards they just gained access to. Allowing players to veer off their charted course can cause ripple effects into other plans, augmenting them in some cases, while hindering them in others. Some action cards grant special abilities based on their placement in the queue, or synergize with other cards, which adds some added strategic choices to a player’s turn. The method of action selection and implementation allows Wonder Woman to stand apart from other similar cooperative games.

An issue we debated was determining whether Wonder Woman was too luck-dependent, considering that actions can only be taken if you have cards with the corresponding emblems. Some felt that the game was entirely reliant by the random card draws, and not having the emblems you need at a specific time put you in a bind as you developed and implemented your plans. In addition, a concern was raised that you could theoretically be stuck in the same location all game with a terrible set of card draws.

However, a few of us felt that this is the basis from which we draw enjoyment from these types of cooperative games, in strategizing around the obstacles that are put up in your way. Wonder Woman does put more of an emphasis on the luck factor by severely limiting your actions, so we would recommend it for groups that have a tolerance for how much you are able to mitigate the luck inherent in top-decking.

Wonder Woman: Challenge of the Amazons does a good job of providing a game with a highly anticipated theme, and some fun tweaks to the traditional cooperative game with programming actions. While the game can get repetitive after a few plays, it would be a good title for anyone new to the cooperative board game scene and is straightforward enough for older children to play together with adults. This title has plenty of points of entry, that can reach a good number of gaming groups.

Final Score: 3 Stars -– A solid addition for fans of Wonder Woman and cooperative board games.

Hits:
• Amazing theme with excellent representation
• Programming aspect of gameplay is a nice twist on co-op games
• Multiple enemies add their own variation to rules and gameplay

Misses:
• A bit repetitive as a game session progresses
• Theme, while awesome, is definitely pasted on
• Too luck-dependent at times