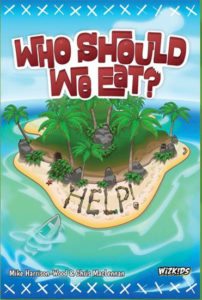 Normally when I write a review, the voice of the review is third person. This allows me to keep some measured distance in voice from the subject and help readers understand that the comments on the subject matter is opinion from a critical perspective. With this review of Who Should We Eat?, observant readers will be able to tell I’m taking things a little more personal. The answer to the game’s title question is nobody. For those that don’t like that short answer and need a little more meat on the bone, see below.

Who Should We Eat? is a role-playing party game with cards for 4 to 10 players about survivors on a deserted island. It takes roughly 30 minutes, and if you really want the party to be as fun as humanly possible, 6 or more players should do the trick.

The concept in Who Should We Eat? revolves around the players acting as the remaining people on a deserted island after some catastrophe. The group has decided to build a raft and the pressure is on because there’s not enough food. The players need to finish the raft to escape the island before enough players die, become ghosts, and spoil the plans of the survivors.

The challenge of the game is that players are trying to be on the winning side, that of ghosts or the raft-building living. At some point, the difficulty might overcome the survivors and the ghosts have more ability to win.

Each round of the game raises the stakes by limiting the amount of progress that can be made on the raft, the amount of food available, and the amount of sanity the group has. Players can contribute in various ways based on their backgrounds (randomly drawn) and personality abilities (also random).

During a round, players will draw set amounts of cards to their hand and then play a card to help the group. Ghosts also draw from a separate pile. Players then play cards in clockwise order from the group leader.

Afterwards, if the group doesn’t have enough to eat (a common occurrence), a trial is held to decide which player needs to die and be converted to food. Each person’s food value can be considered along with whatever skills they bring to help the group. Depending on rules set by the group leader, discussion can be open or very structured.

Finally, an open, finger pointing vote is held to determine who is the person-food. However, before then, a player might reveal a knife card starting a knife fight. Whomever dies (decided by drawing straws) in the fight becomes the food.

The end part of a round is merely an evaluation of whether or not the raft has been completed. If so, the survivors win. On the other hand, if the group has lost all sanity, the ghosts win.

There is only one market for this game, gamers who enjoy the show Survivor. However, even then, much of the challenge of the game is built into random card draws which keep the game from being seriously strategic. And, I get it. It’s meant to be lighthearted, but there is very little “game” here. Much of it hinges on arguing over whom to kill.

The real peril of playing Who Should We Eat? is that there is very little in the way of choice in the game from the very beginning. When the first moment comes to decide who should die, it’s merely a confirmation of a personal grudge or comedic commentary from outside the game OR it’s an objectively reasoned argument that the role played by this or that person is less useful. But in the end, the game really doesn’t do much to drive that tension. Whether or not you die feels just like going from team A to team B.

And finally, the over-structured rules aren’t helping the game in the least. Other social deduction or cooperative games have less rules and are more fun, yet the rulebook for Who Should We Eat? feels like stereo instructions. A lot of what needs to be a relatively simple game structure is sectioned off into sidebars that describe how a knife fight or drawing straws works. The lightness and whimsical (hopefully) nature of the theme is lost in procedural minutiae.

Who Should We Eat? is not a good game. Unless the gamers at your table are diehard Survivor fans looking for a replacement for “Survivor: The Game”, you don’t need this. There are plenty of other games that offer some combination of take-that, direct conflict, and/or betrayal. I just can’t see this being anywhere close to a top selection for anyone. Who Should We Eat? really feels more like a game made to capitalize on a theme rather than elegant mechanisms matched with a great theme.

Final Score: 1.5 Stars – Even with the enthusiasm the game has for the theme, the mechanisms and structure of play reduces the game to a card play luck-fest.

Hits:
• Adheres to the theme well