We review Watergate, a two-player asymmetrical game published by Capstone Games. In Watergate, players take on the role of the Nixon administration and the editor of the Washington Post trying to expose the corruption. 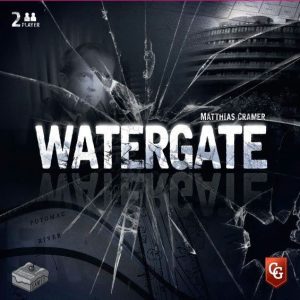 On June 17, 1972, 5 men were arrested breaking into the Democratic National Committee headquarters at the Watergate office complex. What followed was a scandal led to the discovery of multiple abuses of power by members of the Nixon administration, which eventually led to Nixon’s resignation. The Watergate scandal—I’ll spare you the Watergate-gate jokes, but I still feel attaching “gate” to the end of everything to make it a scandal is lazy journalism—was one of the biggest political black marks of the era for the US. Yet you can’t help but be intrigued by how it all went down and the writers that brought the truth to light.

Which brings us to today’s review of Watergate by Capstone Games. This two-player, card driven game puts players in the shoes of the Nixon administration trying to cover up the scandal and the Washington Post editors trying to bring the corruption to the light of day.

To start the game, one player takes on the role of the Washington Post editor, with the other controls the Nixon Administration. Watergate is played over a series of rounds, each of which has 3 phases:

The Initial Phase has players drawing up to their hand limit and adding new research tokens to the track. Whichever player has initiative draws an extra card.

The Card Phase will have players alternate playing cards until all have been played. Cards can be played either for their value or for their action. If played for a value, the player can move either the momentum token, initiative token, or an evidence token matching the color (there are 3 colors) that many spaces towards them on the research track. If a card is played for its action, the player resolves the unique event. Most events are one-time use with the card being removed from the game afterward. The exception is the special cards (Conspirators for Nixon, Journalists for the Washington Post) that can be used multiple times.

After all players have played their cards, the Evaluation phase happens. Players gain any tokens on their side of the research track. Momentum tokens are placed on the player’s card and evidence tokens are pinned to the evidence board. The Editor player is pinning them face up, trying to make connections from informants to Nixon, while the Nixon player is pinning them face down, essentially creating roadblocks that the Editor will have to go around.

The game ends when either Nixon collects his 5th momentum token or when the Editor creates connections between Nixon and two informants.

I’m not a huge politics buff, but I have to say game designer Matthias Cramer did a fantastic job with Watergate. He took one of the most notorious political scandals and built a game around it that not only embraces its theme wholeheartedly but is an absolute blast to play.

Watergate does a great job of creating tension for both players as the giant tug-of-war match plays out each round. This is in large part due to the tough decisions that are required each round. The first of which will be how to use your card each turn: for its value or for its action?

Except for the journalists and conspirators, player cards (each player gets 20) are removed from the game once used for an action. So, this means that not only can you only ever take that action once, but you are also losing the value side of it, which for 4 value cards, that can be painful. Yet on the other hand, it does have the added bonus of thinning your deck. Removing a bunch of cards means you’ll be drawing those powerful journalist/conspirator cards more often.

Now on the other hand, should you decide instead to use a card for its value, what do you move? Initiative lets you go first next round and allows you to 5 cards instead of 4. Yet that Momentum marker is not only what Nixon needs to win the game but can provide bonuses for the editors as well. And then there are evidence tokens. The Editor absolutely needs chains of these to win. Yet Nixon can’t ignore them because he must create enough roadblocks, or the editors will speed their way to victory.

What you end up with is a tight chess match of trying to claim the objectives you need the most each round, but also being aware of what your opponent needs. Singly focusing on what you need each round is a sure-fire way to lose. Players must balance on a tightrope of advancing their position in the game, while at the same time trying to slow down their opponents.

I also really appreciated how the designer really embraced the theme of Watergate. This could have easily been a game with a pasted-on theme, yet the manages to pull deeply from the source material. It was clear that a lot of cards were pulled from their real-life counterparts. As you might expect, the “Deep Throat” card is pretty powerful, for example. The theming is also brought home by the excellent design that has imagery and quotes from their respective historical events.

Finally, the asymmetrical nature of the gameplay worked really well in Watergate. While each player has their own goals and unique deck, the overall gameplay uses the same rules for both players. This helps to give the game variety, yet still keeps learning the game simple. It also tied into the theme nicely, Nixon wants to rush momentum to make it to the end of his term. While the editor needs to draw out the game enough to connect the trail of evidence.

Watergate is a game that started off really good and only got better with repeated plays. As players learn what’s in each of the decks, and how best to use each card, I feel like the strategic decision making only improved. Frankly, I’m struggling to find things to complain about with Watergate. I suppose, if forced, I could note that an experienced player is definitely going to have an advantage over a new player, but that’s to be expected for any game that’s not 100% luck based.

The asymmetrical, easy to learn gameplay hit home with me right away and each subsequent play has been more enjoyable than the last. If you are looking for a card-driven, two-player game that fully embraces its theme, the grab a copy of Watergate from Capstone Games.

Final Score: 5 Stars – Excellent, tight gameplay and a great theme make this a must own for those looking for their next two-player game.

Hits:
• Excellent use of the theme
• Solid asymmetrical gameplay that gets better with every play
• Hard decisions to make throughout the game
• Gameplay ties well to the source material