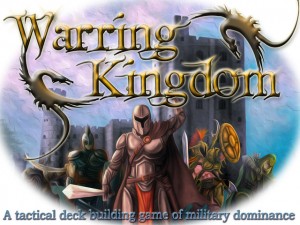 When I first got the chance to play Dominion, I was blown away. I had never played a deck builder that had such an accessible design and fun game play. This helped it to constantly find its way to my gaming table. One of the minor issues that I had with the game is the lack of player interaction outside of a few cards. There were times where I wanted Dominion to be a game where it allowed you to directly battle other players.

Luckily, I have recently played a game that allows me to do just that. Warring Kingdom is a deck building game, currently in funding on Kickstarter, that has players taking on the role of a lord trying to claim the recently vacated crown. In the game you must balance your deck, economic infrastructure, and military attacks to remove threats to your future Kingship. Lets dive into the preview to tell you more about the game.

Warring Kingdom is a deck building game that can play with 2-4 players in about 45 minutes.

In Warring Kingdom, King Thorne of Eastmore is dead and he has no heirs to inherit the crown. The country is falling into chaos, which is where you and your fellow players step in to try to claim the vacant throne. Unfortunately, you don’t have unlimited resources or space in your lands. This forces players to manage their placement of units to build up their economy and military might to support your aspirations to be King. Players will need to show their superiority to the other lords vying for the crown by eliminating one of your opponent’s castle. The first player to do this will be crowned the new King of Eastmore and win the game.

There are two play areas in Warring Kingdom, the supply and player board. Lets deal with the supply area first. This is where players can purchase new cards to add to their deck. There are base cards that are available to all players such as income cards and basic unit cards. There is also four merchant decks that players can buy cards that will add fierce warriors, weapons, items and economic benefits that will allow you to afford your quest to become King. The player board allows you to deploy up to ten cards in a two row by five column grid. Players will have a third row where they will place their castle card. The game starts with each player getting fifteen cards as their starting deck and then will draw five cards into their hand. Players will go through these actions on their turns.

1. Act
Players are able to chose one action from the cards on their board or in their hand to activate.

2. Deploy
Place one unit onto the player board. Players may also play any number of equipment cards.

3. Attack
Allows you to attack another player, but causes you to skip the buy phase later. When a player declares an attack on another player they will line up their units across from one another. The defender player has the option to rearrange their units in any column to fight the attackers units and both players are now able to play any units out of their hands into the open spaces on the board. Each player will roll five dice and the number rolled determines which of their five fronts will strike that turn. If a player rolled a two, they would attack with the second column going left to right. Players will compare the card in the column to see if the attack value is higher than the hit points of their opponents units. If so, the card is wounded and is moved into the player’s discard pile. Rolling a six causes a critical hit, which if applied to a successful attack, will cause that card to be placed into the supply and out of the players deck.

4. Pay
Each card in the player area has a cost associated with it. Players must be able to afford all the units in the play area or discard any cards they can’t pay. Money can come from coins in a players hand and actions activated during this turn.

5. Buy
Players can purchase one card per turn from the cards remaining in their hand after paying any upkeep costs. Players have can buy any of the six base cards or buy a card from one of the four traveling merchant decks. The player selects a deck and they can purchase one of the first three cards they draw of the top of the deck.

6. Discard and Draw
Players will discard the rest of their hand and draw five new cards.

This will continue until one player is able to destroy another player’s castle and they win the crown.

The issue with creating a new deck building game is what new concept can it add. If it is just like Dominion with a new theme, the game isn’t worth investing the time and money.

Warring Kingdom adds some new mechanics to the game play that are a breath of fresh air. The supply area is quite different then I have seen in other deck builders. Like most deck builders games, there are a set of cards that will always be available to players, but the use of different supply decks is interesting. Because you have to draw three cards each turn from one of the four different decks, it isn’t exactly clear what card you will have the opportunity to purchase. You might have to change your plans a few times during the game depending on the draw. This forces players to constantly evolve their strategies. Warring Kingdom ends up being a very deep game.

Where some deck building games are more focused on the deck of cards, this game focuses on building the player board up to defeat the other players. It gives players something else to think about when they play the game. Another aspect that adds to the depth of this game is the limited amount of space that you have on the player board area. Having only ten spots to place both economic and military cards becomes difficult at times to decide on what card would be an optimal unit to have in your castle. Every game I spent more time pondering over what cards to have on my player board then I expected.

The game was a lot of fun to play. The game play is very quick once you get the rules down.  That being said, I don’t think it will be the game I would bring out to introduce people to deck building games. There are so many different actions from cards and uncertainties with supply cards that would quickly overwhelm a newbie. However, seasoned players will pick up this game very quickly, but it will take awhile to master. What takes the longest is if one of the players decides to attack during their turn.

Which reminds me, I need to talk about combat for a minute. I enjoy the combat a lot in this game. I wasn’t sure how using dice to determine which columns attack would work, however, I was pleasantly surprised. I does add some randomness to the game, and sometimes your most powerful unit won’t be able to attack that round, but war is never fair. This adds tons of suspense to the die rolls, waiting to see if you can get the right number to come up to eliminate an entire column of your opponent’s cards. Every round I found myself wanted to try to chip away a little more at my opponents defenses.

Warring Kingdom is a great addition to the deck building genre of games. This game is ideal for the veteran Dominion player that wants more direct player interaction throughout the game. Warring Kingdom as a plethora of strategies and tactics that will keep the game entertaining for along time. If this game sounds like something you would enjoy, please consider giving them your support.

If you are interested in the game, it’s currently funding on Kickstarter and scheduled for delivery in October 2014. A pledge of $37 will get you a copy of the game and any stretch goals. You have until Tuesday, April 15th to become a backer so head over today if you are interested.