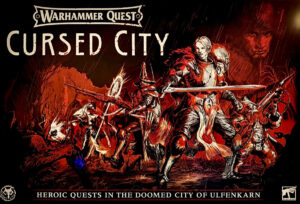 Cursed City is set in the Warhammer: Age of Sigmar universe and is a city in the realm of death. It has been slowly taken over by Radukar over the years and the remaining population has been subject to the whims of the vampire and undead horrors that roam the streets at night.

Warhammer Quest: Cursed City is a 1 to 4 player dungeon crawling game where players take control of heroes trying to free the city of Ufenkarn from the grips of the vampire lord Radukar. Players will have to adventure to level their characters to kill Radakar’s lieutenants and eventually take on the lord himself. Each mission can take between 60-120 minutes.

Before starting the game, players will have to select the heroes they will play and decide on what type of journey they will embark on; Hunt, Scavenge, or Deliverance. Once you level up you can take on Decapitation missions aimed at striking down Radakar’s lieutenants.

There will only ever be four heroes on the board at a time and each hero has generic and special abilities that make party composition essential for successful journeys into the city.

After setting up the map and enemies that were drawn from an encounter deck, the perilous journey into Ufenkarn can begin. Each turn is broken up into phases:

The mission continues until either the heroes have been wiped out or have completed their mission and successfully extracted from the map via their airship.

As a huge Warhammer: Age of Sigmar player I was extremely excited to get Cursed City to the table. After the miniatures were assembled (glue optional) I had to take a minute to admire how truly epic these minis looked. The heroes, especially being from different backgrounds, had that flavor worked into their models and the villains looked properly evil and undead.

For my questing, I chose Emelda, Jelsen, Qulathis, and Cleona and started on a Hunt mission. I rolled for the map, drew my initial enemy spawns, and deployed my heroes into the city. In my first game, things looked calm at first. I had two sets of skeletons, some zombies, and a vampire to deal with. My goal was to slay 10 enemy mobs and extract out of the map.

One of the best things about this game I want to highlight is the dice activation mechanic, including the extra destiny dice. Each hero gets four dice to roll and pay for actions on their turn, with the destiny dice being a backup for tight spots. I feel like this worked very well and balanced out my hero’s actions. When some of the heroes rolled lower dice, I was able to take dice from the destiny pool to supplement allowing me to feel like none of the hero’s activations were ruined by bad dice rolls.

Activations also start to become limited as a hero gets injured, with the injury tokens taking the space of the dice activation boxes. Overall, rolling 6’s felt extremely rewarding. Each character is bursting with flavor and special abilities that I couldn’t wait to activate.

The enemies also had their own activations, each one feeling like they are doing what they should. Skeletons slowly shambled towards my party while the vampire made it halfway across the board in one activation to start attacking my caster. This brings me to the initiative system.

The initiative system in Cursed City felt good at first, but as I was starting to become injured I couldn’t take the gambit and get my heroes to the top of the initiative order causing a snowball of going last when the draw wasn’t in my favor. Some heroes (like Emelda) had some cool powers to mitigate this, but overall, the injuries punished my heroes in multiple ways.

The complete story of Cursed City is amazing, and I felt like the missions were thematic. Having to build up my heroes to eventually take down the different aspects of Radukar’s army felt impactful. My only complaint was about the choice of missions. While the scavenge and deliverance missions felt fine, the hunt missions would begin to get quite grindy after a while, especially when enemies spawned that didn’t contribute to my victory points to finish my quest.

Warhammer Quest: Cursed City is a great entry into the Warhammer Quest line of games. It is dripping with theme and the dice activation mechanics truly make the gameplay shine while making it quite easy for most gaming groups to pick up and learn when in the mood for a dungeon crawl. Some quest, especially a Hunt, feels grindy after a bit and will need to be pushed through for the experience to level characters. The initiative system can also be punishing in the late game.

Final Score: 4.5 Stars – A thematic dark gothic dungeon crawl in the world of Age of Sigmar with great dice activation mechanics and an amazing story to experience.

Misses:
• Some missions can feel a bit like a grind
• Initiative system can be punishing late game