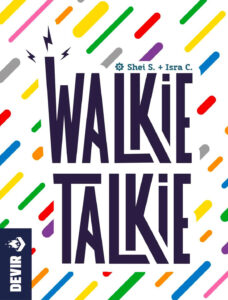 Party games are a rarity on my gaming table, doubly true since the start of the pandemic. It’s just not often that I have 4+ players to test them out and party games also rarely work well under that player count. However, that’s not always the case. Occasionally one pops up that actually works well under 4 players, small parties FTW. Recently, Walkie Talkie appeared in a package from Devir Games with a couple of other small box games. The premise was intriguing, as was the playtime of 1-4 minutes. So I decided to give it a go.

Walkie Talkie is a party game published by Devir Games for 2-8 players. The game takes only 30 seconds per player.

Walkie Talkie is very simple play. The only thing in the box, other than the rules, is a deck of 50 cards with letters on one side and colors on the other. To set up, you flip half the deck over and shuffle the deck together. Each player gets a dealt a hand of 6 cards, and two cards are placed in the center of the table. One of the two cards should be the color side, while the other needs to be the letter side.

In this cooperative game, a timer is set at 30 seconds per player, and on go, players try and play cards from their hands. There are no rounds, just real-time action. The goal is to think of a word that uses a card from your hand and the opposite type of card from the table. For example, if the letter on the table is a “W” and you have a green card in your hand, you can call out “Watermelon” and play the green card, replacing whatever color was already on the table.

If players get stuck, they have two options for help. Someone can call out “Roger” and all players turn their hands of cards over. If someone calls out “Over”, then all players pass their hand to the player on their left. The goal of Walkie Talkie is for the group to collectively play all of their cards before the timer runs out. As a side note, I feel like the terms Roger and Over should be switched, but I supposed that’s not really that important.

I consider myself a pretty fast thinker and can often recall tidbits of knowledge at a moment’s notice. But boy do I suck at Walkie Talkie. The first time I played, I stared at my hand of cards unable to think of words to use. For some reason, I kept getting stuck only thinking of foods, which isn’t even a requirement for the game. The rules are actually pretty flexible, allowing proper nouns, brands, mobile apps, really anything short of saying the actual color.

I will say that after a few games, I did get somewhat better. Perhaps it was just the short timer and early game jitters. But my wife had no issues and would lay down card after card. Thankfully I could call out Over and send her my rather large hand of cards to play. But our first game was at three players, and a minute and a half to play six cards is actually a lot harder than it looks. This is especially true when you have a hand with letters such as X or Q. While those are worth more points, trying to think of words that start with X in a short time can be a challenge.

But, honestly, Walkie Talkie is pretty ingenious in the simplicity of its rules. This is obviously a filler game, but one that can be played with anyone, just about anywhere. Its table requirements are super minimal, and the rules take less than a minute to explain. The biggest issue we had was with policing ourselves with acceptable words. I’m not sure if the rules were kept intentionally vague or not, but we had some questions about what was allowed.

For example, the color was Gray and the letter was H. Fellow reviewer Brian called out Hats. Because sometimes, hats are gray. Is that acceptable? To me, it felt a bit broad. Hats don’t make me think of any one color. Situations like this are supposed to be handled via a discussion and vote. But that feels a bit odd since this is a cooperative game. Any vote against the card played will not only be against the group’s interest but chew up valuable clock time. Personally, I would have preferred a bit more clarity on what can and can’t be said.

Outside of the word ambiguity, Walkie Talkie was a charming little filler game. Sure, it’s not going to be winning any awards, but we definitely had a good time playing it. We even got in a bunch of games in a row. I mean, games are only around 2 minutes long, so why not. This one definitely falls into the category of “how has no one thought of this one before”. Part of me wonders if this would have been better as a competitive game though, at least arguing against words would make sense then. But Regardless, Walkie Talkie is a fun party game that can work well with any type of group.

Final Score: 3.5 Stars – A clever word game that can be played in literally just a couple of minutes.

Hits:
• Easy to learn
• Minimal table requirements
• Can be played with just about anyone

Misses:
• A little unclear of how specific words need to be
• Over should really be the phrase for turning your cards over