We review Voodoo, a dice rolling party game published by Mayday Games. In Voodoo, players are placing "curses" on other players, causing them to do silly things or else they will earn their opponent's victory points. 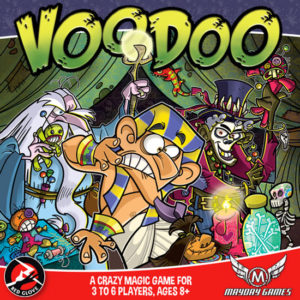 When I look out at the non-hobby games that have come out recently, they are not all roll your dice games and more popular ones focus on making a situation funny to be the main point of gameplay. Maybe it’s slapping whipped cream in someone’s face, trying to read lips to repeat a phrase, or communicating with a piece of plastic in your mouth, but they all try to make everyone laugh at what someone else is doing. I have never found this type of game particularly interesting to play.

In Voodoo, there is an attempt to meet in the middle with board game mechanics that provide spells you cast on other players to make them do certain actions. Does this game find a way to bridge the gap between the two gaming worlds? Let’s get to the review to find out.

Voodoo is a dice rolling hand management game for 3-5 people to play in around 30 minutes. In my experience the game plays the same with all player counts.

Each player is trying to be the first to score 11 points by casting curses on the other players. To do this, players will first need to roll five dice. If you happen to roll the required ingredient for a curse, you can spend those dice to cast it onto another player and earn victory points. This will cause the player to do certain actions during the game, such as talk like a frog, cover one eye, or don’t let your feet touch the floor. If that player doesn’t follow the curse requirements, the casting player earns extra points.

Players can take multiple actions with their ingredients to buy new curse cards, purchase artifacts that can help players, or cast multiple curses. If you don’t like the dice roll, you can take as many dice as you want and reroll. However, you must pay the cost of one die.

As players earn more points, they will eventually earn permanent curse cards that will be in effect for the remainder of the game. The player who can manage all the curses the best will be the first to 11 points and win the game.

Unfortunately, my experience with Voodoo wasn’t positive. While I enjoyed some of the effects, the majority lacked an essential element of fun. During my play-throughs, I found most of the cards to be more annoying than fun and this wasn’t just for the person required to do the curse actions. Players around the table grew tired of some of the movements, sounds, and restrictions other players had to make. There were times where I would just give the casting player a few points to allow me to stop the effects of a curse.

Having the curses be annoying is a major crux of the game, but I realized that this game is not for me. Games that implement this type of effect on a limited basis can work, but making it the main focus didn’t lead to a good experience. Players observing others doing ridiculous things had a brief chuckle, but the novelty quickly wore off.

However, I can see this game working for a group of players that enjoy this type of experience. The cards effects can eventually lead to some difficult combination of curses to juggle as you progress through the game. The permanent curses you acquire are more punishing and do a nice job of upping the difficulty. I think the game will have a segment of players that will really enjoy it; I’m not one of them.

I did enjoy the dice rolling element of the game. It’s a push your luck mechanism as you balance getting the right components you need. I also like how you are always able to do something on your turn. Even if you can’t cast a curse, you can always purchase a new one or an artifact that could help you later in the game. Unless you push too far, you will be able to improve your standing. This allows for each turn to be meaningful rather than just a throw away. The game does this better than most.

Voodoo doesn’t work for me. While I enjoyed the dice rolling element that allowed you to have plenty of options each turn, the curses overall bring the experience down. It wasn’t enjoyable for me to make players juggle the forced actions of the curse cards. While games that have a little of this element work fine, having in the main focus doesn’t lead to an enjoyable experience. Voodoo just misses the mark for me.

Final Score: 2 Stars – The games aim to make curses annoying and they succeed but at the detriment of the whole gaming experience.

Misses:
• Novelty of other players curses quickly wares off
• Lack of laughing during the game