We review the digital version of Viticulture for iOS, Android, and Steam. Publisher Digidiced has brought this excellent worker placement games to our computers, tablets, and phones.

It’s been about 7 years since I reviewed the worker placement game Viticulture here on Board Game Quest. It’s hard to believe it’s actually been that long, but since then, Stonemaier Game’s first offering has not only had a large expansion (dubbed Tuscany), but also been updated with the Viticulture Essential Edition. This version incorporated a few quality of life improvements as well as a handful of items from the Tuscany expansion.

And that’s the version of the game that developer Digidiced has brought to our tablets, computers, and phones. So, fire up your Pixels, iPads, PCs, and other technical doodads as we take a look at the digital version of Viticulture.

If you want the full ins and outs of Viticulture, you can hop back to our original review of the board game, as it’s largely unchanged (other than the small changes from the Essential Edition). But the quick of it is that you are competing winemakers racing to be the first to 20 victory points. Each round of this worker placement game takes place over 4 seasons:

As players fulfill a wine order, they’ll earn victory points and residuals (yearly income). Once a player has earned 20 victory points, the game ends at the end of the round. The player with the most points wins.

Overall developer Digidiced has put together a solid offering of the Viticulture board game. Players have the option for online play, offline vs an AI, or pass and play among friends. From the technical end, the app worked well, and I didn’t experience any issues or crashes. This app uses Digidiced standard game engine that has powered a number of board game apps (Terra Mystica, Cottage Garden) and still works well. I will say that it is starting to feel just a tad clunky and dated, especially compared to slicker engines from other developers. It could probably use a facelift sometime in the near future.

If you are a newcomer to Viticulture, the app does offer a tutorial to get you started. Unfortunately, I found it a tad lacking for brand new players. It feels more like an abbreviated rulebook vs a guided walkthrough. It falls into the same trap that hurt the Imperial Settlers Roll and Write app in that it tells you what to do, but not really why. Fortunately, I’ve played over a dozen games of Viticulture over the years, so it worked fine as a refresher for me. But a new player is definitely going to feel a little lost at the start.

When playing offline, you have three levels of AI to choose from. I must say, Digidiced did a really good job of programming the AI, because even the easy AI offered a nice challenge. Once I got back into the groove of playing the game (it has been years), I felt more comfortable facing the medium AI. But I would probably reserve the harder AI for true Viticulture die-hards.

Graphically, Viticulture is nice looking and uses the art lifted right from the board game. It has a few graphical embellishments, like clouds in the background, but not too much other than that. Thankfully, there is also a way to speed up the action, as games with multiple AI opponents were painfully slow. However, it is buried pretty deep in some menus, so be sure to hunt around for that if you value your free time.

As I said earlier, this is a solid offering of an overall excellent board game. While Digidice’s interface may be showing some age, it still runs the game quite well. The AI opponents offer a nice challenge, and there is online multiplayer (both async and real-time) to fit almost anyone’s play style.

My only real gripe was the mediocre tutorial that might leave new players a little lost. But once you are up to speed on the gameplay, this is a great way to experience one of Stonemaier Games’ best offerings. If you want to try it out, Viticulture digital is available for iOS, Android, and Steam depending on your digital preference.

Final Score: 4 Stars – A great way to play this worker placement game, although you might want to seek a tutorial video online first.

Misses:
• Tutorial was a bit lacking
• Engine is starting to show its age 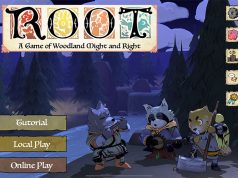