We review Vengeance, a dice and fighting game set in a neo-noir world where player’s heroes seek bloody revenge on gangs and their bosses who violently wronged them. 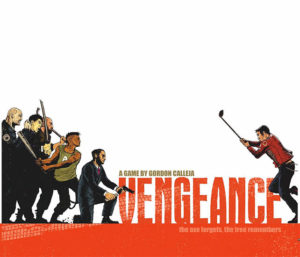 Back in the 90’s I loved watching a local TV station that showed a martial-arts movie showcase on Sunday afternoons called Samurai Sunday. All the movies were dubbed poorly in English, which was part of the appeal. But what drew me to those movies was the overall revenge theme. A student or son would study and learn to become a great martial artist and seek vengeance on the man, woman, or group that killed their master or family member.

This brings us to Vengeance from Mighty Boards. This game brings neo-noir revenge films like Kill Bill, John Wick, or Oldboy to the tabletop. In Vengeance, the player’s hero seeks bloody revenge on Bosses and their gangs who violently wronged them.

Vengeance is dice and fighting game for 1-4 players and plays between 30-120 minutes and plays well with all player counts.

There is a lot to cover with Vengeance so we’re going to do a high-level overview, but the actual rules are here if readers want them: Vengeance rules.

It’s important to note that Vengeance is made up of Acts much like a revenge movie. The Wronging occurs first, followed by Acts 1-3 which consist of Montages and Combat Rounds until the End for final scoring.

The game centers on The Wronging– this is how the player’s hero was brutalized and who they seek vengeance on. Players will draft 7 cards using a familiar “pick and pass” mechanic. The player then selects 3 cards from those drafted and places those face up on the table. Their hero takes the damage listed to one of their 3 attributes: Mind, Skill, & Health.

Players then move to the Montage Round which is split into 4 phases:

1. Dice Draft: The Montage Dice are rolled and players draft dice according to the turn order. Players can spend the dice on their Montage Cards to Heal their hero, buy upgrades, recon boss hide-outs, wilds (see below), and boost their speed.

2. Action Phase: Players select 3 Montage Cards and then reveal one at a time and add Montage Dice- wild cards will boost the result by 1.

3. Vengeance: Players can spend wild dice or tokens and draw an equal amount of Vengeance cards.

4. Player Order: Players add up the speed symbols on the Montage Cards and dice to determine the new player order.

After the Montage you then move to the Combat Round which is split into 2 phases:

2. Fight: Player’s heroes enter the gang’s Den and fights. Fights are handled via die rolls. The player has 3 rounds to move throughout the Den to kill minions and, ultimately, take out the Boss that wronged them. If successful, they’ll score victory points for minions and Bosses killed. If they are KO’d or run out of time, they must exit the Den unsuccessful.

The play continues and Acts will vary according to what’s outlined on the Turn Tracker Board. After Act 3 the game ends and the winner with the most Victory Points wins.

I’ve become a big fan of Mighty Boards. Their production values and attention to detail make their games stand-out and Vengeance was a keeper for me as soon as I opened the box. The game’s theme is rather unique and well supported in all aspects. From the graphics, custom dice, figs, etc. I really love how the gameplay mirrors that of an actual Revenge movie. The hero is wronged, has some down time to recover, and goes for revenge, or vengeance in this case – then you rinse and repeat. Also like most noir revenge movies, the fighting picks up in Acts 2 & 3, which include two Combat rounds instead of just one.

This brings us to the Upgrade cards. You might think that being a dice game, that chance will play a huge part in your success. It will, but the Upgrades you will collect and use are great equalizers to improving your luck. I like that fact that you can influence the rolls and not rely solely on what the dice give you.

The biggest plus for theme support in Vengeance is The Wronging. This is a slick mechanic where you receive damage from the Vengeance cards and then hunt the Bosses on those cards for VPs. You might think this is odd to voluntarily hurt your character, but it’s a great thematic element. Plus, even though the hero stats aren’t full, your character is not helpless to get their pound of flesh.

Unfortunately, there are a few things that I was not a big fan of and the first was that there’s no player/hero interaction. You’re basically on a solo mission and the only way to mess with other players is by taking the upgrades they want or raiding Dens they needed.

The second negative is that’s there’s no catch-up mechanic with regards to VP collection. I will say that in most of my plays, games were pretty close but there were a few that were just run-aways. As any gamer knows, that can sour you on the game and can close the door on future plays. There are Mission and Achievement Cards that can help any player receive more VPs, but again, these can be claimed by the current leader who can pull away further.

The last worth mentioning is that the Upgrades help with your dice rolls but when it comes to the Boss it’s totally the luck of the draw. Now spending Recon tokens can help you see what Boss Cards might be in which Den, but it doesn’t mean you can change it. If you’re looking for a specific boss who might not even be on the table, it’s frustrating and you need to be scoring to keep with other players.

Again, I have to give credit to game designer Gordon Calleja for making an excellent, well supported, revenge-themed game. The Wronging, Upgrade Cards, and excellent production values make Vengeance an easy “must have and play” for me. I usually don’t care if a game theme is well supported, but Vengeance is one of best from start to finish that I have played in a long while.

Hopefully, players can get past the low to no player interaction and luck of the draw with regards to the Boss Deck in Vengeance (or Mighty Boards can address this in expansions or future errata… hint, hint).

Final Score: 4 Stars – A well-supported revenge-themed dice, fighting game. This one is a keeper for me.

Misses:
• No player interaction
• No catch-up mechanic
• Luck can be significant