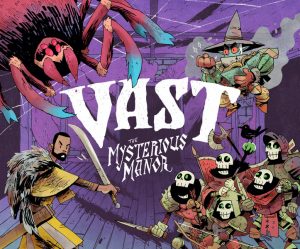 Quite a few companies are releasing second editions of popular games. Fantasy Flight Games and Red Raven Games seem to particularly love releasing a box with “Second Edition” somewhere on the cover. Sometimes, the point is to refine old rules, improve components, or to bring their game back into the light. Leder Games is not shying away either.

Vast: Mysterious Manor features asymmetric play which divides the game into five viewpoints, each more diverse than the other. The two games in this series are cross-compatible, and the rules specify changes that need to be made for creatures from one game to fit in with the other. In Mysterious Manor, the five forces competing for their objectives are the Paladin, Spiders, Manor, Skeletons, and finally, Warlock.

The main board features a map set up as a grid. The empty spaces, called crypts, will help multiple roles with their goals. For example, Pit tiles help the Skeletons maneuver, Shrine tiles help the Paladin inch closer to avoiding the map’s tricks, and Blood tiles support the Spider. Rather than go into detail on each side’s rules, the overview of each below will show broadly how they work.

The Paladin’s goal is to defeat the Spider by hitting her 5 times. However, the horde of Skeletons plan to kill the Paladin, so the crusader must stay quick on his feet, avoiding danger, but seeking the Spider to achieve his goal. The Paladin also gains Grit from completing actions across the map.

The Skeletons are out to kill the Paladin. The bone crew has five characters who each take their actions. Skeletons run off of Stability, a currency which helps them spawn more figures in the early game. One complication is that the Skeletons are forced to activate in a specific order. When a skeleton dies, it moves to the first position in the activation order.

The Spider is a shapeshifter looking to escape her slumber in this treacherous place. Her goal is to gain 12 terror and escape the Manor. The Spider has three forms, the Giant Spider, the Sorcerer, and the Spiderlings, each of which has their special abilities and actions that will shape the way the game is played.

The Manor controls the map and what inhabits it. It wins when 14 Seals have been completed. A seal is completed when a separate Wraith figure moves through unoccupied tiles to form a polyomino pattern. The more difficult the pattern, the more seals are completed. After completing a pattern, the Manor places a poltergeist on a tile, which can be killed by other characters for bonuses.

Finally, the Warlock is trying to “dominate” 5 poltergeists and/or treasure chests. The Warlock needs to trace a path to one of these figures to add it to his “network”. To do this, he needs to place curse tokens underneath them, completing the domination. The Warlock has spells that are aimed at revealing the map, moving figures, and other various actions.

Because of its asymmetry, Vast becomes challenging to learn and play every time a new character is brought to the table. Learning a character can be complicated, and often takes a whole game to master. Players are usually forced to learn the opposing sides, which makes teaching take longer because multiple players are learning multiple sides. What’s worse, the rules on player boards, while very helpful as a reference, aren’t fully clear on many specifics which are often necessary.

Complicating the above issue, Vast’s rulebook can be unclear about specific things that might be crucial for gameplay. For example, specific rules for usage of map tiles and Poltergeists are unclear in the section where they are introduced, and play can slow as assumptions need to be based on rules in the sections for other characters. Other issues often come up if a character wishes to understand closer whether an ability works in a certain way in a certain circumstance. The FAQ is full of situational issues that players have encountered.

Vast’s asymmetry isn’t all bad, however, as each character provides a new take on how to perceive the game in motion and other characters feeding off of those actions. The boards are less bulky and have detailed art that suits the game well. Setup for each character is fairly simple to grasp and understand as well. The game feels more refined from its older cousin, Vast: The Crystal Caverns.

Vast’s strategy is also a very key part of how you play the game. The way that each character blends with each other makes a very interesting game. Players’ options are set based on which character they might be wanting to block. For example, the goblin may also want to position his pieces in such a way that he can block the Warlock or Manor.

Switching gears, one problem with Vast’s components is the uses of standees. Basic characters are included, but things like the Spider’s Eggs, the Paladin’s Pillar of Light, and most importantly, treasure chests are not included in the base game. The expansion, The Haunted Hallways, compensates for this with added figures, enough for the whole table.

Vast: The Mysterious Manor is a good game to introduce to semi-experienced players. It provides replayability, but at the cost of having to learn completely new rules frequently. I would suggest this game to players who want to feel like they are different from their opponents and also to players who love delving into focused tactics. I enjoyed Vast: The Crystal Caverns, but The Mysterious Manor makes its own mistakes and hasn’t improved enough over the previous game to earn any additional praise.

Final Score: 3.5 Stars – Vast is a good game but could have its rules enhanced for better learning/setup times.

Misses:
• Long learning time
• Frustrating rules
• Not many miniatures included with the base game