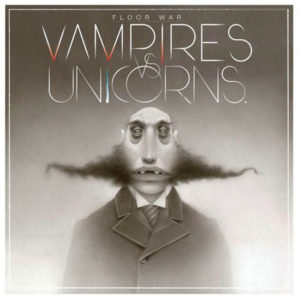 Tooth versus horn? The Vampire and Unicorn kingdoms are at war! In Vampires vs. Unicorns: Floor Wars you’ll channel your inner magician for a card throwing battle. Part cornhole, part paper airplanes, this one may not hit the mark for everyone.

Vampires vs Unicorns: Floor War is a card tossing game for 2 players that takes about 10 minutes to play. Adult beverages not required but recommended.

Players choose their side, either as leader of the Vampires or commander of the Unicorn army. Tiles are arranged about 5 feet apart in pyramid configurations with low level minions in front and the factions stronghold in back.

Using their faction’s card deck, players take turns standing behind their stronghold and throwing cards at the tiles of their opponent in an attempt to destroy their stronghold. Cards that land on the first line of defense, the basic minions, kill them outright. Stronger minions on the second row require two cards to land on them before they are KO’d. While a side has defenders, it takes landing a card entirely on a base to destroy it, but once all the other tiles have been taken out, it only takes a card landing anywhere on the tower to finish it off.

Most cards are a basic attack – simply toss and hope it lands somewhere beneficial. A few more powerful cards in each deck give you the ability to throw multiple cards. Running out of cards is also a lose condition, so skillful tossing is a plus.

I generally like games that require you to toss objects. I’m a wicked good bocce player. I’m better than passable at cornhole and I can throw a Frisbee with some accuracy. I never injured my siblings with lawn darts for the six months we owned a set (before mom heard about the recall and packed them away in the garage somewhere). I’m bragging about my throwing skills because Vampires and Unicorns made something evident very quickly – I suck at throwing cards.

Like not even just a little. Some cards didn’t make it over my own stronghold pyramid. Multiple hit my opponent. One tried to go down the heat register fifteen feet away. Another wound up on top of a six foot bookcase. If the object of the game was to find out how many insane places you could wind up tossing a card while standing in the same place and throwing it the exact same way then I’d win that game hands down. Unfortunately, this is not that game.

My struggle with Vampires vs Unicorns is it’s kind of hard to figure out exactly where this game fits into one’s game library. At just two players, its not really a party game. There’s almost no skill involved (unless you’re Gambit I suppose.) Strategy is zero. While adding a couple beers increases the random lunacy, it also makes bending over to pick up cards and/or tiles somewhat precarious. Actually, the idea that you’ll be playing 104 card pick up at the end of each game is somewhat sobering despite one’s level of intoxication.

The art is monstrously (see what I did there) good. Travis Louie’s vampires look like something out of a Victorian photo album, and Travis Lampe’s Unicorns look like Adventure Time met Hieronymus Bosch. The two wildly different styles definitely add to the us vs them mentality – while I ordinarily would have chosen unicorns to play, I just had to chose vampires based on the art. Apparently backers of the original kickstarter were even encouraged to frame and hang the tiles. The drawback is this might have made a good kids’ game, but the macabre style would put it right out of the age range that would enjoy the physicality of this game.

Vampires vs Unicorns is light enough that nongamers aren’t intimidated by it. Also, it doesn’t make a half bad spectator sport, particularly if the players are a) terrible and b) somewhat inebriated. On the other hand, for those that have limited mobility this game is a hard pass. Additionally, depending on what the floor is covered in visibility issues could crop up, particularly when some of the cards are back side up.

Vampires vs. Unicorns: Floor War might be a low stakes party game for some, but its ultimately a game of 52 pickup with some pretty tiles to aim for. Macabre art style is visually appealing, but narrows the audience for the game. Low player count makes Vampires vs. Unicorns not really for parties and it wouldn’t be your typical pick for a two player game night either.

Final Score: 2 Stars – Interesting art, but not enough substance to make it something you’ll want to play again and again.

Pros:
• See how bad your friends are at card throwing
• Unique art
• You could likely convince your non-gamer sporty friend to play

Cons:
• No skill required
• No strategy involved
• Problematic for players with mobility or vision challenges