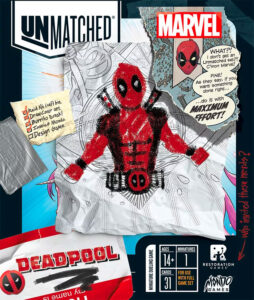 The Unmatched system has been cruising along with regular releases since 2019. We’ve covered quite a few of them here on BGQ, including the original release of Battle of Legends, and the award-winning Cobble and Fog. Today, we are going look at one of the most unique fighters for Unmatched, Deadpool. That’s right, the 4th wall-breaking Marvel hero gets his own entry for Unmatched. So hoist up your red pants as we take look at this new expansion.

Let me start off by saying Deadpool’s expansion is not going to be for everyone. The comic book hero iconically does a lot of 4th wall breaking moments, and the design team fully embraced that with his set. So be prepared for a lot of off-the-wall abilities that you won’t see in any other Unmatched character. If that kind of craziness bothers you, Deadpool probably isn’t right for your collection.

That being said, if you are a fan of the Deadpool comics (or even movies), then you’ll feel right at home here. Deadpool sets the tone right away with his character card. He is a melee character with 2 movement. His power is to heals 1 point (max of 10) after every attack, which is pretty powerful with 22 potential attack cards in his deck. However, he does have an additional power, if your opponent’s real name (the player you are playing against, not the character they are controlling) is Logan, all his attacks gain +5. Good luck winning that matchup, Logan!

Diving into his deck proper, you’ll see some really cool cards. His strongest attack is his Gaze of Stone (the art shows him holding Medusa’s head), where if you win the combat, you deal 8 bonus damage! Another one I liked was his Professor Deadpool card that gives Deadpool a sneaky ranged attack. One of his universal cards lets you, mid-combat, switch out that card for any other one from your deck. There was definitely a lot of creativity with Deadpool… and that’s before we even get into his more meta cards.

So how weird do things get? Well for starters there is his Chimichanga Break! card, a versatile card with a value of 2, that turns into a 5 if there is food on the table. Then there is the “I’m not wearing pants card” that changes its versatile value from a 2 to a 5 if it the card isn’t sleeved. Or the “Call Me” card that has you writing your opponent’s name on the card after combat, which increases its value to 4 if your opponent’s name is on the card when you use it. I can say that all the cards don’t have this level of insanity. There are about 6 or so cards (including the character card) that have some kind of unusual meta game effect.

For his fighting style, Deadpool is a solo hero with no sidekicks to help him out. And with only 10 hit points, he will have to rely on his constant healing to help keep him in the battle. You’ll also need a bit of luck with his draws, as some of his powerful cards require being played at the right time for maximum effect. He lacks the fast combo nature that a solo hero like Bruce Lee has, but his large amount of versatile cards and healing abilities definitely give him some staying power. I do think it was an odd choice that he doesn’t have any ranged abilities (other than 1 card), since he’s often seen shooting guns, and his mini is even throwing a bomb.

Finally, I want to talk about the components. The graphic designers with this expansion clearly had a lot of fun putting it together. Jason Taylor and Lindsey Daviau breathed life into every one of the cards by making them feel as if Deadpool himself created them (Deadpool even crossed out their names on the box and wrote his!). Some cards look like they are written on playing cards, store receipts, cocktail napkins, or even a faculty ID for Scott Summers. Every card draw is a moment of joy and discovery with lots of entertaining illustrations or call backs to the Marvel universe.

Deadpool, while not the most powerful of Unmatched characters, is still a lot of fun to play. However, as I said near the start, he’s also not going to be for everyone. His atypical card abilities that rely on things outside of the game are most likely going to be a turn off for some people, especially if they are named Logan. I have a friend whose son is named Logan, I doubt he’d want to play this expansion. However, fans of Deadpool will most likely know what they are in for and embrace it. For others, they probably would have been happier without the extra, non-game related powers.

For me, I’d say if you are OK with those 4th wall-breaking elements, go ahead and grab this one. He definitely feels unique. For everyone else, you can probably pass on him if you are more of a gaming purist and instead, wait for the (most likely) more traditional Marvel characters coming later this year.