We review Two Base Stations, an escape room style board game where players are playing at remote locations. Played over a video call, you and your partner must work together in different locations to escape. 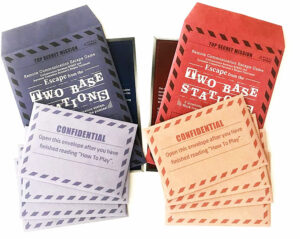 Ever since Exit: The Game rocketed onto the scene in 2016, there has been a slew of escape room board games that followed. From Unlock! to Break In Alcatraz, it seems like everyone is looking to carve out a piece of this niche. Yet it’s the ones that truly try and do something different that stand out the most. Games like the Room Service box from Cafe Nordo, or the Tale of Ord.

Today we are going to look at a new offering in this genre, Two Base Stations from SCRAP Games. What’s unique about this one? Well for starters, you play remotely with a friend in another location over your favorite video service of choice. Sound intriguing? Let’s check it out.

When you are ready to begin, you fire up the video chat. This can be Skype, Zoom, Discord, whatever your preference is as long as it has video, audio, and chat functionality. When you are ready to go, you’ll each open your envelope and follow the instructions. Each segment of the game is split up into two pieces: a shared script to read and some kind of puzzle that will require both of you to solve.

However, the main trick of the game is that your communication methods will be limited in some way. So one puzzle might have you communicate with video only, while another limits you to using the chat function with limited keys.

The game will guide you into opening envelopes as you solve puzzles until you get to the end and win.

I am going to keep this spoiler-free so I won’t talk specifics about any of the puzzles. First of all though, who is this game for? The early puzzles had me thinking it was more of a family game, as the puzzles weren’t your typical escape room fare. Instead of lateral thinking, they involved activities such as charades, spot the difference, or word puzzles. This is all fine if they were aiming at the family market.

But about halfway through the game, the difficulty really ramped up. Fellow BGQ reviewer Andrew and I were cruising along quickly and then we both got stuck and ended up using the hint system (more on that in a bit). Personally, I would have preferred a more gradual slope for the difficulty of the puzzles. We felt like we were wading around in a kiddie pool and all of a sudden found the deep end.

But let’s talk about the main draw of the game—the ability to work remotely. Overall, it worked well. The game had you toggle on and off your camera and mic at different times, so it really did embrace the remote aspect. It was kind of entraining to be miming things to my partner when we only had video to work with. That being said, nothing really felt like it required us to be remote. We could have easily played this game at the same table and just not talked, or wrote things down instead of typing. I kind of wish they had played up the remote aspects better.

And while being able to play with someone remote is cool, especially in times of social distancing, it also forced the game to lose any kind of collaboration aspect. In most escape room games, you are working with your teammates to figure out a solution. You can bounce ideas off each other, and if someone has a brainstorm, it can lead to other breakthroughs. With Two Base Station, you are largely on your own, with your partner more as a means of input. Your partner is more of a means for basic inputs, more akin to a game master, than actual teammate.

However, when you are stuck, there was a rather nice hint system in place. A dedicated webpage offers a gradual series of hints to help point you in the right direction without giving away the answer (although that’s an option if you go deep enough).

Two Base Stations is a solid game, but also one that could have taken its gimmick a bit further. I’m also not sure who the target market is for this game. Early puzzles start you off at a family level, but later ones are most likely out of the realm for anyone but experienced puzzle solvers. Overall the game was fun, but the biggest barrier to entry will probably be the price. Two Base Stations sells on Amazon for $37. For a one-shot game that takes about an hour to play, that’s a pretty steep price. This is especially true because the game is literally a handful of envelopes each continuing a few sheets of paper. There isn’t much in this package that feels like the price is justified. So caveat emptor.

Final Score: 3 Stars – A novel concept that probably could have been pushed a bit further to really set itself apart.

Hits:
• Ability to play remotely
• Good hint system
• Tries to weave a narrative, albeit with some cheesy dialogue.

Misses:
• Remote play could have been pushed further
• Loses the sense of collaboration
• Price feels steep for the components you get