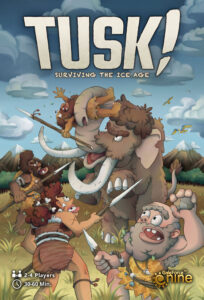 When I think about the life of early humans I picture a challenging life full of hardship and danger where day-to-day survival was their only goal. Compared to now where completing Wordle before your morning cup of coffee feels like an achievement and I get the sense that we’ve gotten soft as a species. Like my biggest hurdle to this introduction has been the graphic design of the title. Is this game called “Tusk! Surviving the Ice Age” or “Tusk: Surviving the Ice Age”? These are the small things that keep board game reviewers up at night. Likewise, the editors may be equally frustrated when I write Tusk! and then the next word isn’t capitalized.

And in case anyone is interested; it’s Tusk! according to page 2 of the rulebook.

Tusk! is a semi-cooperative game that starts with a small collection of tiles, possibly loaded with resources, and the player meeples placed around the board. Each player has a card giving them unique end game scoring conditions and a single Tribe Member on the board.

Each turn is comprised of three phases—The tribe phase, the hunt phase, and the season phase.

The Tribe phase is broken into three steps:
1. Grow the tribe – spend tasty food tokens to add workers
2. Send out Hunters – Commit tribe members to the hunt
3. Send out Gatherers

The gatherer step, weirdly the meatiest part of your turn, gives each Tribe Member two actions which are move, gather, recover, and fight. Moving allows you to move up to two tiles. Gather allows you to collect one resource from the space you’re in, recover allows you to recover from injuries, and fight allows you to fight another player’s tribesman on your space.

Besides being mean to each other, players can also trade and gift resources at any time. The resources in the game are Tasty Food (used to buy more workers and are scored as points at the end of the game), Pointy Sticks (+1 to hit for fight and hunt actions), Lumpy Rock (+1 wound if you hit during an attack), and Clump of Grass (+1 defense during fights and hunts).

The hunt phase has players working together to take down a mammoth. Each hit (rolls of 6+) do one point of damage (and granting one food). After it’s defeated the hunt leader gets four more pieces of food to distribute as they see fit—even to people not contributing or keeping it all for themselves. If you don’t take the mammoth down, it gets a go at attacking everyone and it hits on rolls of 4+ (or 5+ if you are using Clumps of Grass). This repeats until the mammoth is defeated, all the hunters are wounded, or everyone still standing bails out on the hunt to presumably watch cave paintings and chill.

The season phase starts with drawing a season card which has some effects for the next turn. Some examples of these effects are adding resources, removing resources, making tiles easier or harder to traverse. Then the mammoth roams moving the direction rolled on one die and moving based on what the symbol on the card says (0-2 spaces). Any tribe members in the path are wounded and moved out of the way.

The first two seasons have tiles added making the world a bigger place and puts more resources into play. Then the tiles start to get flipped over (rolling the dice to see where it starts) and the snow starts to spread across the board like a slow avalanche advancing between zero and two spaces depending on what the season card says removing any tokens in its path. When the snow covers the whole board, the game ends.

This is a game that starts feeling cramped and then opens up only to get claustrophobic again as the world turns into Hoth. Player interaction tends to go up with higher player counts, especially after all the resources are depleted.

In my plays there seemed to be a predictable progression to this game as we’d collect resources, add tribe members, and then fight the mammoth. Not having resources to fight the mammoth gives little room for error as you hit on a six and it hits on a four through six. Likewise, joining the hunt before there are enough people to be successful just takes your gatherers out of play. This interaction between the players, including deceiving others, is part of the experience. Bribing others to join the hunt and then either taking part, or not, could have downstream ramifications. There’s a victory card that rewards fighting other players so this game can range from cooperative with a winner to full on competitive where you actively antagonize each other.

Overall, this is a fairly straightforward action selection and resource management game that hides a mean streak behind the cartoony art and silly names for resources. Basically, once tiles start being flipped over, you’re racing away from the ice collecting what resources you can as you approach the end game. And in the event there’s nothing left to gather, hunting the mammoth or fighting each other become your only pathways to gaining more food. And that brings up the question players may ask themselves—do you spend the resources you need for end game scoring or try to do more damage to the mammoth and hope you get the lion’s share of the meat?

Depending on the starting tiles and the order of player actions, it’s possible for one or more players to start out with an advantage. Gathering a food token allows you to add a tribe member and the earlier you can add a tribe member the more actions you get to take over the length of the game.

The scoring windows are generally tight but the hunt leader could try and cheat their partners which could have an effect on end-game scoring. And if someone gets extra Tribe Members early and makes progress on their end scoring goal, there can be a bit of a runaway leader problem as one of my games had one player more than triple the second and third place players’ scores.

Tusk! Surviving the Ice Age is a relatively quick-playing action selection game with variable scoring and provides players with a nice decision space for their activations and encourages player interaction. But this decision space shrinks down as the ice age approaches leaving little room for maneuvering. This semi-coop/semi-competitive game may work great for some but I didn’t enjoy attacking the other players at the table. However, leaving that out could leave the game a little flat as you either haphazardly attack the mammoth empty handed or patiently wait for the world to freeze over.

Misses:
• Fighting or cheating other players may not be for everyone
• Decision space shrinks as the ice age approaches
• Runaway leaders are possible