We review Tumble Town, an engine building and dice rolling game published by Weird Giraffe Games. In Tumble Town, players are trying to build the best rootin tootin town in the old west. 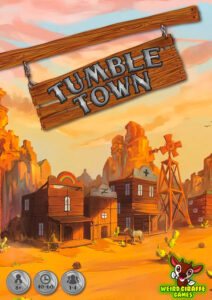 There’s something satisfying about building something physically. A piece of that satisfaction comes through when playing engine-building games when you become a cube-pushing deity over your player board as you convert resources and trigger various combos to climb the scoring track. Tumble Town by Kevin Russ combines both of these as you collect and manipulate dice to build little dice shaped buildings on your main street.

Tumble Town, the best little frontier town in the old west, has forsaken democracy and will pick their mayor based on who can build the best town. Once you get your head around the multiverse-style mind job of duplicate towns all being built at the same time; the rest of the game falls into place.

The game plays one to four players and lasts about fifteen to twenty minutes per player.

Tumble Town is a dice manipulation game where you collect dice and use them to build your town.

Your turn in Tumble Town is pretty straight forward. At the center of the table are 12 cards set into three rows of four cards. You pick a building you’d like to build in the future and collect the indicated from the back of the remaining cards in that row (there’s an end card that has resources on it when all the plan cards are in play). Roll the dice and try to manipulate them using the special abilities from previously constructed buildings. There’s a gold pan that allows you to trade in dice at a rate of two of the same color or number for one of any type.

Every player’s horse has a different symbol on it and an identical power to add or subtract one pip from one die. Some buildings have powers that also allow you to manipulate dice, while others offer a one-time bonus resource, while the top tier buildings offer end of game scoring bonuses.

To complete a building you need the plan, dice that are the correct color, and match the requirements for the values on the dice. For example, some buildings require all unique numbers while some others may only want odd values or a sum of pips to be less than or greater than a specified number.

Once the requirements to build have been met, you stack the dice, as indicated in the picture on the card on your main street. The placement on the street can net you more points as you can gain a bonus point for each column of the dice that match the requirement on your player card. You can also get a bonus point if you have an alley between buildings.

If you can’t meet the requirements to construct a building you can choose to just go for it and get a -2 point penalty token for each requirement not met. And while that could be a viable strategy; I picture the fake Rock Ridge at the end of Blazing Saddles as what this edge case of play would practically look like.

Once two of the four piles of dice are reduced to two or less; the game ends once each player has taken the same number of turns. Points are scored for each building fabricated, points on the main street, end of game scoring bonuses, and horse bonus points. Penalties are subtracted. The highest score wins.

There’s something fun about rolling the chunky dice or dropping them into the included dice tower and building your little town in front of you. There are lots of small decisions to make as you choose between different buildings. Do you go for the ones that offer more dice manipulation powers or jump at the higher scoring buildings? Do you prefer your horse’s building type or focus on placement within your town? At all player counts some cards are left in the box which adds to the uncertainty of what could show up as well as the replay value.

The three cactus cards typically offer end scoring bonuses. Some of these are based on the shapes of buildings in your town while others have a picture. On many of the cards of each tier are hitching posts, crows, water towers, etc… and those can be worth points if the right building comes up. Unfortunately, some of these look like mediocre photoshop additions where there’s something not right but it’s hard to place what it is. But the cards themselves are linen finished and feel high quality.

Player interaction in Tumble Town is limited and there’s not a lot of opportunities, outside of hate drafting, to interfere with your opponents. In three and four player games there are dance hall cards that grant you points for buildings your neighbors have.

For both a two-player and solo game, the biggest complaint I have is that the game ends too soon. I haven’t played at higher player counts to see if that still holds true but with the number of dice going up by 24 and 48 with three and four players, respectively, games will last a few more turns.

Especially in solo mode, I feel like the dice pools are devoured by the Outlaw AI player very quickly. I appreciate that Carla Kopp from Weird Giraffe games always includes one or more solo modes in the games she publishes. I have yet to beat the AI so I’m not sure if it’s really hard, I’m missing something, I’m stupid, or some combination of these. In full disclosure, I also lost to a five-year-old for what that’s worth in helping you decide.

However, the main reason I think the AI is too hard is that it has a 66% chance of getting each tier of building each turn so there’s a 96% chance that it’s getting at least one building, 29% of getting three, and less than 4% to get zero. But, when the AI grabs all three buildings, it takes a 2 point penalty so that’s nice. A player can grab one building per turn which limits the points that can be earned. The player does gain points for placement which could end up being equal to a couple of buildings by the end of the game.

Tumble Town is a delightful and tactile game experience with a bucolic old west theme. It’s fast playing and has good replayability based on the number of cards. Luck does play a factor for what cards show up along with the randomness of dice rolling but skill and planning will likely still triumph. The thin theme in Tumble Town hasn’t hampered my enjoyment of the game.

Final Score: 3.5 Stars – A fun and tactile dice rolling and manipulation game that falls short of great by ending too soon and the lackluster art.

Misses:
• Solo and two player games end too soon
• Card art is very plain and some of the extra images for scoring can be visually jarring.
• Theme is almost non-existent