Home Game Reviews Truck Off Review
Review of: Truck Off

We review Truck Off, a press your luck and take that style board game published by Adam's Apple Games. In Truck Off, players are trying to earn the most points by running the best food truck in town. 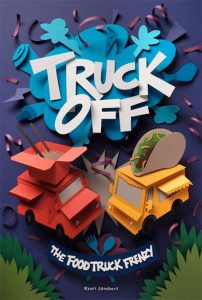 Its 7am, your food truck is fueled, produce is loaded, and you’re looking forward to a day at the local fair or festival, making delicious treats for hungry foodies. Whats the only thing that could ruin this day? Other food trucks, stealing your customers with inferior products. What are you going to do about it?

In Truck Off, players face off as competing food truck owners. The object is to earn the most money at the end of five days by making the best choices for locations to serve at and maximizing profits, or deviously engaging in a little truck warfare by getting competitors closed or their venues shut down.

Truck Off is a press your luck/take that game for 2-6 players. It plays best with 5-6.

Players start by choosing a food truck and the venues for the week are set based on number of players. The game is played over the course of five rounds. A round consists of selecting trucks, rolling for patrons, selecting actions, action execution, and payouts.

Each round players secretly selects two of their trucks, then reveal them to indicate which venues they’ll be going to. A die is then rolled for each venue to indicate how many patrons showed up that day.

Players next choose action cards – cards that will influence everything from whether or not a competitor can stay at a venue to how much additional money can be made in a space. Players can choose as many actions as they’d like to take that round. Once all players have chosen, actions are executed one by one in order starting from the first player. Players may chose to discard an action if they wish.

Once all actions have been played, Payouts are determined based on number of patrons and any action modifiers. Profits are split by each truck at the venue. At the end of five rounds, the player with the most money wins!

Ya’ll – there’s a truck called Fry Hard. FRY HARD. I mean, this is already a win, what else do I need to say?

Corny puns abound. Random chance will cause the top truck to crash and burn. In particular, with a higher player count nothing seems terribly personal, but with a lower one there could be some food truck smack downs.

The strategy is light at best. You won’t know what venue will have the highest number of patrons til after you place, and a few action cards can easily change that. Your own cards might not affect you as desired: at one point I played a re-roll with flourish to change a 2 patron valued truck and rolled… a one (sad trombone).

Like most games of this nature, player count will wildly affect your play style. While the game tries to negate some of that through using fewer venues at lower player counts, it’s just not quite enough. You have the option to save actions until the end for points. In higher player counts, 2-3 extra points may make a difference, with just three that is pennies. Additionally, the actions may seem more direct with fewer players – if you shut down a venue with just one person at it they’re probably coming back at you next round, if you’d done the same to some place with 3 players, it wouldn’t have seemed so personal.

I love the cut paper art style but I have to admit I was somewhat disappointed that there weren’t little origami trucks to assemble. I’m also not sure it translates as well to the small truck tokens, so this can seem out of place.

Most of the relevant information is easy to read. Flavor text (in the form of funny food names like “Friends in Lo Mein Places” and “Brisket to Ride”) aren’t necessary to gameplay so the legibility isn’t quite as necessary, but can be hard to read and one could feel like they’re missing out. Large font in the rulebook is also generally good, but the occasionally small type can be a struggle for those with vision issues. That being said – the rulebook is well laid out – if you read front to back you’ll have everything down pat from the start.

With Truck Off, player count matters – at higher player counts this is mostly a fun themed take that, at lower player counts this may come across as more cut throat than the theme implies. Additionally, since the strategy is pretty light it can seem pretty random. The art is adorable and puns are definitely groan worthy. The take that crowd may enjoy going head to head, players that stress over direct conflict might want to give Truck Off a miss unless they’re playing with 5+.

Final score 2.5 Stars – Hysterical puns and fun art aside, the randomness of play and take that aspect tailor this to certain players and not necessarily your entire game group.