We review Trick Shot, a board game based around the sport of Hockey. In Trick Shot, each player takes control of a hockey team as they attempt to score goals, pass the puck, and win the match. 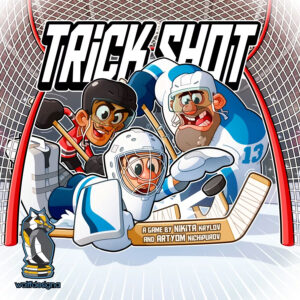 He shoots… uses a re-roll… and scores!

As a sport, ice hockey is simultaneously elegant and chaotic as it shows off a combination of balance, power, and aggression, and finesse. Trick Shot by Nikita Krylov and Artyom Nichipurov and published by Wolff Designa (no relation) tries to capture the feel of hockey without every turn feeling like a scrum along the wall. The game plays from 2-4 players and takes anywhere from 30-90 minutes to play.

Like all hockey games, we’ll start with the face-off where each player rolls three dice, and whoever has the most pucks and arrow symbols wins and gains control of the puck. It’s random, but considering there have only been 29 players in NHL history with a faceoff winning percentage greater than 55% we’re off to a totally random yet accurate start.

The player who wins the face-off then selects their first move and rolls one die. An X is a fail and, like most failures in the game, can be mitigated by a re-roll. Each team has four reroll tokens which are represented by cardboard tokens showing the players on the bench. Each subsequent action taken by a player adds one die to their pool. So the second action takes two dice, the third takes three, and so on. Each re-roll requires you to re-roll every die that was showing a symbol (good or bad) and multiple re-rolls may be used.

Some of the actions a player with the puck may take are move, pass, or shoot. A player may not activate the same player twice in a row (unless you’re using a Line card; which I’ll explain later). Catching a pass doesn’t count as an activation to a player receiving a pass that can immediately be activated. Whenever a player rolls one or more arrow icons, called a reaction, the other player gets to move any player one space in any orthogonal direction after the player who rolled has moved.

A player with the puck can’t move if a defending player is orthogonal to them at the start of their activation, as they’re checked. The skaters come in three sizes: Big and slow (defense), medium (fast centers), and small (fast wingers). Size only matters when it comes to hitting and fighting as in the former’s case you can only hit someone the same size or smaller than you. This makes hockey players seem like bullies but considering the Flyers’ nickname in the 70’s was the Broad Street Bullies, maybe it’s fairly earned.

To score, the skater with the puck has to shoot in a straight line into the net. If an X is rolled there’s a rebound that bounces the number of puck symbols rolled away. And if two or more X’s are rolled the goalie has made the save and controlled the rebound.

Some actions that can be taken if you don’t have the puck include poke checking to gain control of the puck and hitting (advanced rule). Hitting combines moving and poke checking into a single activation but comes at the cost of taking a penalty. But instead of sitting in the sin bin you put the player on the time track so you know when they get to rejoin the game.

There’s two ways for a player to finish their turn: they decide to stop rolling and they’re able to refresh their reroll tokens or they fail an action and have no more rerolls to use. When their turn ends, unless there’s a face-off, the referee token advances one spot on the time track. When there’s a face of time advances if the other team wins the face-off.

And lastly, despite the real-life decline, no hockey game would be complete without fighting. Each player rolls dice equivalent to their size to see who wins and then they both go off to the clear cubicles of shame to reflect on their life choices.

Simulating a game that features line changes mid-play, 100 MPH shots, and glass shattering hits is challenging and Trick Shot does it well. It would’ve been easy to fall into a “you go, I go” type mechanic for a game all about simultaneous action. The reaction symbol provides that “read and react” action and it works well as it keeps both players involved in each other’s turns. The rules that bring players back on-sides when the puck leaves an offensive zone help keep the game moving (instead of making players waste activations to get back on-side).

A game of Trick Shot can be played over one to three periods of the player’s choosing making a game last anywhere from 30 to 90 minutes. The rules are generally pretty clear and similar enough to make this a fairly easy game to teach and get playing. This game’s core mechanic is press your luck and as such, winning and losing will often come down to luck and rerolls. Do you line up and take a slap shot or try to get closer and hope to score or pounce on the rebound? The best play may not mirror what the best play would be in real-life.

Simple rules like when the puck leaves an offensive zone, all the players (except the goalie) are moved to the neutral zone stacking up at the blue line as a free action keeps the game speeding along. There’s a nice flow to this game and turns tend to be quick as you move skaters around to set up your break out or offensive zone rush. This is not a game that simulates a power play where there are 30 passes around the perimeter while someone in the crowd yells “SHOOOOOT!”

Overall the components are great with the caricature-styled miniatures complete with missing teeth. The defensemen are hulking ogres compared to the tiny wingers and medium-sized centers (or centres for our Canadian readers). But it’s an exaggeration because it’s not like real life players are that different in size. The art for the line cards carries the same fun cartoony style that’s inviting and nostalgic for hockey fans. The game comes with six big chunky dice, although I wish a few more were included as rolling seven or eight dice isn’t uncommon in a game if you can get on a hot streak. Likewise including the extra skater for when you pull the goalie is a nice touch.

The ups and downs of the randomness does invoke the chaotic nature of hockey with both “how did I fail that roll?” moments and runs of good rolls having one player deftly weaving through their opponent’s static defense like they’re a bunch of traffic cones. The games are going to be filled with cheers when you score on a slap shot from the blue line and groans when lady luck crushes your soul when you have to use three rerolls on your first move to skate two [bleep]ing spaces away in a straight [bleep]ing line. Or so I’ve been told.

My biggest complaint with the game is the sameness of starting out at center after a face-off. You have to move a winger and pass to them or pass, move the center or defenseman, then pass to them. Factor in some reaction symbols cutting off passing lanes and you could be on your fourth move before the puck is out of center face-off dot.

Trick Shot, as a board game, doesn’t perfectly simulate the modern game of hockey. The goalies are more or less inept (as a former goalie I feel you; we’ve all been there) and the game can spend a lot of time bunched up between the blue lines. Likewise being constrained to diagonal shots, moves, and passes while a clean design decision feels limiting while you try to thread the needle between the other team’s pylons, I mean players.

Despite my grousing in the previous paragraph, Trick Shot does a very good job of being a fun hockey game and will likely appeal to board gamers who are hockey fans. It may have less appeal to anyone who is only a fan of one or the other. It’s simple and intuitive enough for non-gamer hockey fans. At the same time, I don’t think the mechanics will do much for a non-hockey fan board gamer–especially if they don’t care for press your luck. Anyone who detests randomness in their games may want to leave this on the shelf. The score reflects a hockey fan’s appreciation of the game with non-hockey fans knocking the score down one star.

Final Score: 4 Stars – Trick Shot captures the spirit and often chaotic nature of ice hockey with a fun aesthetic and high production value that will have players cheering and groaning with their rolls.

Misses:
• Simplified rules can stifle your Gretzky-like passing creativity
• Opening moves are limited and can feel samey
• More dice would be nice