We review Tribes: Dawn of Humanity, an action selection and resource management game published by Thames and Kosmos. This is a great entry-level civilization building game for new players. 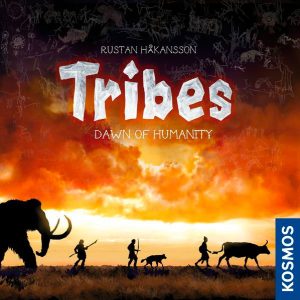 Every gamer has a journey story about how they came to board or roleplaying games. Usually, there’s an indoctrination moment or coalescing of a group that creates a repeated social space for gaming. And as part of that, a learning process begins. Players can usually chart their growth from times they really didn’t know a wood cube from a brick token all the way to skimming rules to quickly get the gist of how a game plays right before they have to teach it.

Along the way, players will probably encounter games that epitomize a repeatable and teachable game mechanism. They might also show common tropes of design or strategy. Players who manage to internalize these mechanisms have advanced far enough to end up reviewing board games for half-rate web sites begging for the scant droppings of game publishers. But I digress.

Tribes: Dawn of Humanity from publisher KOSMOS is a game that aims for strategy-casual gamers and new(ish) players. As per the moniker, it’s a dawn-of-civilization action selection/management game for 2-4 proto-gamers that takes about 45 minutes. It’s best for a tribe of 3 or 4 players.

Each player begins the game with a single tribe member placed on a 3 tile space representing their own land. The main board serves as a tracking space for the various player-tribes to see who has gained what level of procreation, exploration, movement, and strength. At the same time, it also tracks which tribes have achieved advancements such as cooking, trapping, or, the ever-necessary cheese making.

With each player turn, an action tile from a row alongside the board is selected, used by the player, and then moved to the end of the row. If the player selects the second or higher tile, they must pay a shell for each tile they skip over. If a player selects a tile that already has shells, they keep them. As a result, players might be forced to take the first tile (if they have 0 shells), or they may have collected so many shells that they can take the 9th tile.

The selected tile is the player’s action for the turn chosen from:

When a player collects an achievement, depending on if they are the first, second, etc., they place a marker on the achievement tile and unlock their ability to collect the next higher achievement. Each achievement is gained only if the player has tribe people located on the spaces indicated by the achievement. This collection awards the player victory points as well as an advancement in moving, procreating, or exploring.

The game ends once players have unlocked and used a certain number of actions awarded from the 3rd/top row of achievements. The overall structure results in a race to have the most efficient selection of actions, hopefully denying opponents the most optimal time to use actions.

Right from the start, the biggest hit on this title with all players is the action selection. It’s incredibly engaging, especially at a player count of 3 or 4. The expectation of using an action only to see an opponent move it to the back of the row is extremely frustrating. Players will quickly catch on to mitigating that happening repeatedly. As a result, it teaches players that the order of their choices matters just as much as the value of a certain choice.

In conjunction with this, sometimes players are hesitant to judge or observe other players from a strategic perspective. Ignoring opponents in Tribes: Dawn of Humanity is a very quick path to defeat. As engaging as the action selection is, keeping an eye on an opponent’s positions and motivations is also important, thereby creating a multi-layered decision space. This complexity results in an extremely rewarding play experience, even when players feel like they’re losing.

The other aspect that makes this title situated perfectly for its audience is that the mechanisms are simple. Everything flows seamlessly and teaching could not be easier. Players, even new ones, can grasp from the start how a tribe’s attributes work in combination with actions and victory conditions. When coupled with a race for achievements, the tension is ratcheted to just the right level.

However, that isn’t to say that this is a game to bring out repeatedly. It’s a great introductory game for action selection and ranking mechanisms, much like Catan is great for teaching resource management. Once players have a couple plays under their belts, it may be a better game to leave on the shelf for a while. The variety in play setup is somewhat lacking and the play parameters don’t change very much from game to game. That’s not a huge negative, but it’s something to be aware of.

Tribes: Dawn of Humanity is the game to pick up for gamers looking to introduce other players to the hobby. It’s got an engaging decision space without boring hardcore gamers in need of a cube push. All-in-all Tribes: Dawn of Humanity delivers a solid package with art and theme that matches the play style while managing to help new players grasp some of the meatier concepts in gaming.

Final Score: 4 Stars – As an introductory game for action selection and player track ranks, it’s a chewy but gentle choice for new gamers getting a feel for the hobby without causing experienced gamers to doze off.

Hits:
• Play is engaging with each turn
• Watching other players needs is crucial
• Introduces mechanisms in a gentle way