We review Traintopia, a route building and tile laying game published by Board and Dice Games. In Traintopia, players are trying to score the most victory points by creating train routes and adding features to them. 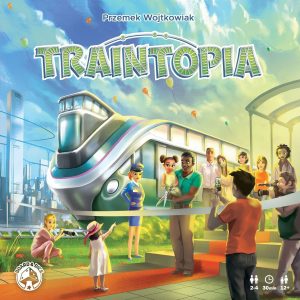 Chooooooo chooooooo! Train game time! I am a big fan of the train game genre. 18XX games. Cube rail games. Trained-theme euros. I don’t particularly have an affinity for railroads or anything in real life, but route building in games is one of my favorite mechanisms. And today we are looking at Traintopia. What could be better than a utopia of trains? Nothing… probably.

But this Boards & Dice train game isn’t quite the long and heavy type of game you might expect from them. It’s more Carcassonne than Russian Railroads. But let’s put on our conductor hats and see if this one is worth the price of a ticket.

In Traintopia, players will draft tiles, passengers, and cargo and place them in their own tableau. Each round a different number of tiles and other pieces will be available, based on the card drawn that round. Then you’ll take turns picking one of those things and adding it to the network (in the case of a tile) or placing it on one of your existing tracks to score points.

The tiles are pretty straightforward. They contain some amount of track, various colored districts, and potentially landmarks. When you add a tile, it must overlap at least half of an existing tile and the track can never run into a dead end. Tracks are considered to be complete if they have a station on both ends. They never branch into multiple directions, but you can have as many tracks in your network as you’d like.

The other items you can draft, instead of a tile, can score you points by placing them on a track. There are commuter passengers—in three different colors—that score for districts the track passes through. Tourists score based on the landmarks adjacent to their track. And mail cargo that doubles the end game scoring for the total length of that particular track.

Some tiles will also give you a money token. These can be spent to either take a bonus tile that often has lots of good scoring opportunities or to change the color of a commuter meeple when placing it. Generally, each track can only have one commuter of each color so this can allow you to score the same colored districts multiple times throughout the game. There is also a train token that can be drafted which scores points for leftover money tokens you have at the end of the game.

The game ends after 8 or 9 rounds (depending on player count). You score additional points for any completed tracks based on how long they are and their stations’ colors. Then whoever has the most points is the best conductor in Traintopia.

I like tile-laying games. I like building routes. I even like drafting games. Overall, Traintopia is a good mix of solid mechanisms that comes together in a perfectly reasonable way.

The biggest flaw is the imbalance in the stuff that you get to draft. Mailbags can be extremely lucrative. Trains are nearly worthless and always get picked last. Tiles with stations on them are worth their weight in gold. Every other tile is mostly about the same value. It’s hard to develop your network in a way that will make your strategy much different than everyone else’s. It’s this lack of being able to specialize in a meaningful way that really takes some of the shine off of Traintopia.

That’s not to say it is a bad game. Having to decide between when to draft a tile to add to your network and when to draft something to score is critical. The scoring happens when you draft, so if you take a green commuter you score for all the green districts on that track. Adding more districts to the track after that person is already placed doesn’t do anything for you. It’s a careful balance of waiting to get a bigger opportunity to cash in versus taking that which is available now.

When the final round is complete you’ll also get to pick one of the end game bonuses, starting with whoever currently has the fewest points. So there is even a little sub-game of trying to sandbag some of the immediate scoring opportunities to get the bonus of your choice (which includes things like a wild-colored commuter and a station to add to your network).

Traintopia is a good family weight entry into the tile-laying genre. Yet, it’s difficult to jump up and down about the game because it just doesn’t do quite enough to stand out. I enjoy the drafting element and the interesting decisions that scoring offers. Unfortunately, some of the items, especially trains, are too often useless. And there doesn’t seem to be a winning strategy in Traintopia even if you focus on taking all the trains and all the money in the game. Everyone will battle over the game pieces and doing well comes down to timing your scoring actions just right.

Final Score: 3 Stars – A good family weight tile-laying game that, at the end of the day, just feels a bit uninspired.

Misses:
• Scoring options are too straightforward and don’t allow much specialization.
• Trains and money seem undervalued.