We review Tower of Madness, a dice rolling and push your luck game published by Smirk and Dagger games. In Tower of Madness players are trying to investigation locations and avoid pulling tentcales which can cause marbles to fall. 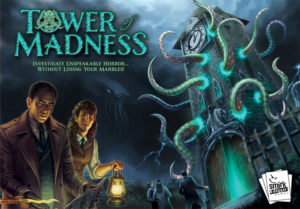 One of the games I was really looking forward to at Gen Con this year was Tower of Madness. It combined some dice rolling with a really neat tower mechanic that is sure to bring back memories of playing Kerplunk. Comparisons aside, the game looked really fun with it’s massive tower full of plastic tentacles and of course, the Lovecraftian theme. So the question remains, does the gameplay hold up? Let’s find out.

Tower of Madness is a dice rolling game for 3-5 players that takes about 30 minutes to play. The game plays best with 3-4 players.

The goal in Tower of Madness is to have the most victory points at the end of the game. These are earned by capturing locations and collecting discovery marbles. However, that is all assuming you don’t go insane first, in which case you want to bring doom to the world by causing the 3rd doom marble to drop.

At the start of each round a new location is revealed, all of which (except the first) will have a special rule for the round. A player begins their turn by rolling the five dice. After each roll, they must lock at least on die into their board. To succeed the investigation, they must lock a gate symbol, a mind symbol, and a heart symbol by the end of their turn. Should they do that, then the last two dice will be used to calculate their discovery total (2-12). If their discovery total is the highest of the round so far, they become the new lead investigator.

However should they not be able to lock all three symbols, then they must pull a tentacle from the tower. This may cause one or more marbles to fall. Some marbles are good, allowing players to earn victory points or draw spell cards. Some are bad, including the aforementioned doom marbles or madness marbles (4 of these an you go insane).

At the end of the round, the player that earned the highest discovery total collects the location card into their score pile and a new round begins.

The game ends in one of three ways: when all location cards have been claimed, the player with the most victory points wins. When the 3rd doom marble drops, then all players lose. Or when an insane player causes the 3rd doom marble to drop, in which case that player automatically wins.

While I drew some comparisons to the mass market game Kerplunk in the intro, the heart of Tower of Madness is a dice rolling game. Sure, you are pulling tentacles and marbles fall, but since you can’t see the marbles, there isn’t much of a strategy to tentacle pulling other than avoiding obvious load bearing ones. The strategy in the game lies in the dice and spell cards.

The dice rolling mechanic in Tower of Madness works quite well. It uses a bit of push your luck and keeps things interesting by throwing out special rules each round. While you will normally be at the mercy of the dice, publisher Smirk and Dagger did throw a bone to the players to help mitigate some of the luck present in all dice games. This is through the use of spell cards and Unnatural Influence tokens. Players can earn spell cards when a white marble drops on their pull, and Unnatural Influence tokens by rolling a pair of fives on their turn. All this combines to create some nice variety in what is an otherwise light and causal game.

Speaking of the marbles, I thought it was a great idea to have a mixture of both good and bad marbles. Normally, you’d expect to always want to avoid having to pull a tentacle, but the chance to draw spell cards or earn victory points is a nice consolation prize. Sometimes its almost better to fail a roll and draw a tentacle rather than just deal with a low score and know you won’t be the leader for the round.

Which brings me to a possible issue with the game. Tower of Madness has the potential for someone to play the role of spoiler. Late in the game, it can be quite obvious you aren’t going to win if one or two players have collected most of the locations. In this case, a player could intentionally start falling rolls to pull as many tentacles as possible (usually from obvious load bearing locations). They can then bring on the end of the game with everyone being a loser if they can get the last doom marble to drop. Whether this is a design flaw or an intended feature is really up to you and your group to decide.

Finally, I should mention that, overall the quality of the components were solid. The tower, once assembled, strikes an imposing sight and looks great on your tabletop. However, ours had a slight issue with the laminate on the tower shrinking, so it had trouble staying closed. You can read more about the issue here, but some light flexing did help alleviate the problem. Worse case you can just throw a rubber band around the tower.

I found Tower of Madness to be a clever and imaginative game that defiantly makes good use of its main components. The game play was enjoyable, had some tense moments, and overall kept the all the players engaged during the game. Even on other players turns you are focused on the game to see if they become the new leader or, even better, when they have to pull a tentacle.

The only thing that would hold me back from bringing it out more often is the lengthy setup time. You have to insert 30 tentacles into the tower and then fill it with marbles. It’s not too bad, but for a light game, it’s probably not something you will want to do repeatedly. Overall, I think Tower of Madness will be a hit from groups looking for a light, push your luck dice rolling game that has something unique to keep the players attention.

Hits:
• Fun push your luck mechanics.
• Engaging gameplay, even when it’s not your turn
• Ways to mitigate the luck
• Not all marbles are bad