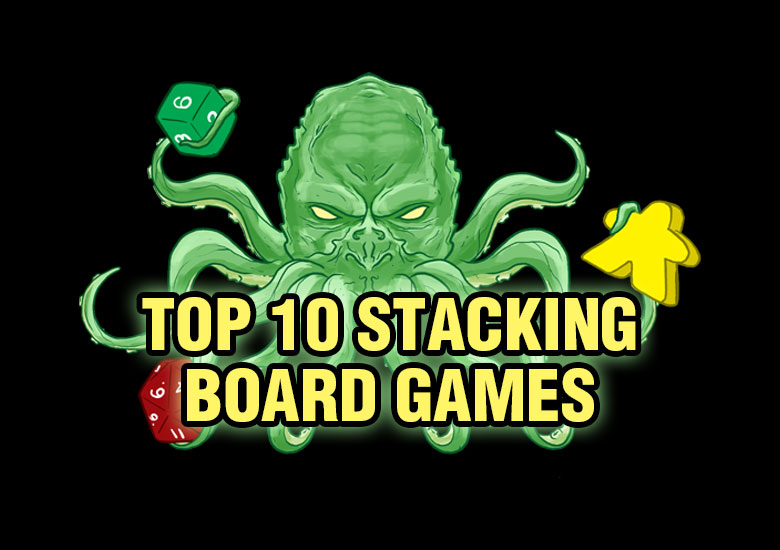 A while ago, fellow reviewer Andrew listed out his Top 10 Dexterity Games. While I still think he is insane for leaving Rampage (Terror in Meeple City) off the list, the rest of his choices were solid. As dexterity games are one of my favorite genres of tabletop gaming, I thought I’d take the theme of his list and drill down a little bit deeper.

Today we are going to take a look at my Top 10 Stacking Games. To help keep this Top 10 list from getting overly broad, we are going to only focus on dexterity based stacking games. So while games like The Climbers or Santorini might be excellent, they are outside of the scope of this Top Ten.

A unique filler game that plays quickly and also has the potential to create quite the mess. In Boom Blast Stix, players are stacking plastic triangles onto a pile. The catch is that each triangle has the potential to pop up and explode, causing the whole stack to fly out. You just want to make sure you are not the player that causes the explosion. Boom Blast Stix is not for the faint of heart, and while it’s most definitely a one trick pony, it does that trick extremely well.

In this reverse stacking game, players are trying carefully remove all the pieces from the plate. The key is that the plate is balanced atop a small ball, so you have to judge each piece carefully less you topple the whole thing. Bamboleo is kind of a pain to set up and has a large footprint, which is why it’s not higher on the list. Still, it can provide for some entertaining and tense moments as you carefully study the pieces to find that perfect one to take that will keep you from losing.

A dice rolling game where players are trying to earn the fewest penalty points. In Paku Paku, players roll the dice in front of them in real-time, hoping to get the symbol that lets them pass the dice to their opponents. However, if they roll the red stacking symbol, they have to stack a plate, bowl, or cup onto the stack. Should the whole thing topple, they will incur penalty points.

Created by veteran family game publisher HABA Games, Animal Upon Animal has players stacking wooden animal pieces upon each other. Aimed primarily at children, Animal Upon Animal is very easy to learn and quick to play. Roll the die and take the action shown. This usually involves stacking one of your animals onto the pile, with the goal being to be the first player to have successfully stacked all of your pieces.

Jenga is the big name in stacking games and has been available since 1983. Unlike many other mass market games, Jenga is actually a solid game. However, the best Jenga experience I have ever had was when I played the role-playing game (RPG) Dread, a game of horror and hope. This RPG eschews dice in favor of the Jenga tower being its only randomizer. Should you need to make a skill or ability check, you must instead pull a block from the tower. If the tower ever topples, you die. Jenga and Dread together have created some of the most intense and memorable RPG sessions I’ve ever had. 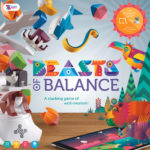 This stacking game combines high-quality plastic pieces with an integrated tablet/phone app. In Beasts of Balance, players stack different animals and shapes on the connected “plinth”. Every piece you stack will affect or appear in the virtual world on your app. It’s pretty neat to see the whale you just stacked appear in the ocean on your tablet. Beasts of Balance was originally a solo game (try to get a high score), but expansions have created a battle mode where you can now face off against another player. 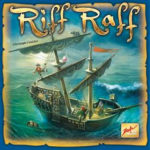 The clever theme in Riff Raff tasks players with trying to load cargo aboard a swaying ship. Pieces can be loaded onto the base of the ship or even the precarious yard arms above. Should any pieces fall off the ship, you must collect them all into your supply. The goal, of course, is to be the first player to load each of your pieces. The variety in weights and shapes of pieces really make winning this one a challenge. However, the originality of the components really makes this one memorable.

Rhino Hero has long been a staple here at BGQ and now it comes in two versions. Both have their place in my opinion. The original Rhino Hero will have you trying to get rid of your hand of cards as you stack a communal card tower. The new Super Battle version has players facing off against their opponents in a much bigger and more grandiose tower. The dice rolling battles mechanic are dubious at best when it comes to the value it adds, but I do love the bigger scale of the game. I just wish HABA would bring the giant version of Rhino Hero to the USA.

Probably the most complex game on the list, Meeple Circus just barely misses out on the #1 spot in a close race. The game has players drafting different circus pieces, which the must then stack in real-time. Oh, and I should mention that the timer is an app that blares circus music theme. The goal, of course, is to stack your pieces quickly and efficiently to maximize your scoring opportunities as the player with the most points at the end will win. Meeple Circus is a creative game that uses its theme to the utmost and easily one of my favorite dexterity games overall.

One of the most well-rounded and flexible stacking games on the list, Junk Art has not only a variety of play methods but seamlessly scales up to 6 players. All of the different modes will have you stacking pieces, however, the game plays varies from stacking onto your own pedestal to using a communal one. The dozen different gameplay options in Junk Art give the game a ton of replay value and its easy to learn rules make it a game you can play with just about anyone. Much like Rhino Hero, I wish publisher Pretzel Games would release a giant version of this one!

That about does it for our Top Ten Stacking Games list. Do you have a favorite stacking game that we missed? Let us know in the comments below!