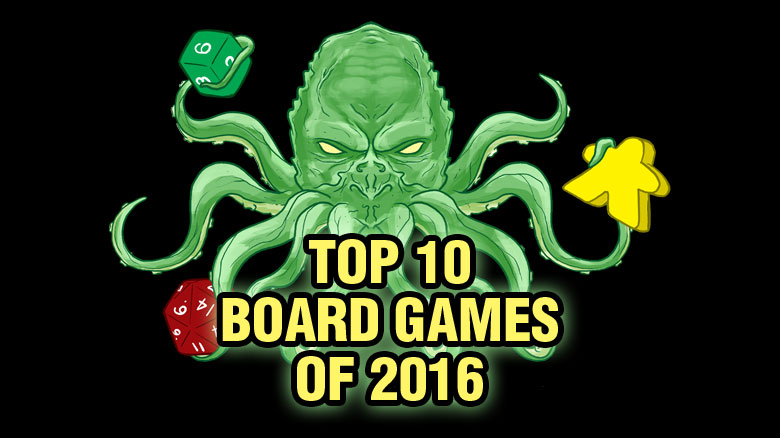 With 2016 coming to an end, we can finally close the books on a year of board gaming. Thanks to the rise of Kickstarter, we had quite a few new games released this year. Hundreds, if not thousands of new games are available for players to enjoy on their tabletop.

As I do every year, I’ve somehow narrowed down the slate of games to my 10 favorite. I want to stress that these are my Top 10 Board Games of 2016. Games that I loved and continue to play. That also doesn’t necessarily mean these games are the consensus best games of the year. That distinction is saved for our annual Board Game Awards this coming spring. And there are a few still that I’ve yet to try out: notable Star Wars: Rebellion, Captain Sonar, Terraforming Mars. But enough of the disclaimers. On to the list.

I wasn’t sure whether this should be a 2016 or 2017 release, as it has only recently gotten into the hands of its Kickstarter backers. That being said, I’ve played it twice so far and really enjoyed the game. I haven’t gotten it to the table enough yet to decide if it should have a place in the top 10, but early play have it close for sure. So I’m giving it an honorable mention, for now.

Long time readers of this site will know that I’m always attracted to games in the Cthulhu Mythos. This year, Fantasy Flight Games have ditched their Call of Cthulhu Living Card Game in favor of the Arkham Horror Card Game. Now fully cooperative, players must work together to unravel the mysterious happenings in Arkham Massachusetts. With lots of thematic elements, this one almost feels like a board game/RPG hybrid.

One of my surprise hits of the year is the two player game Agility. Designed by Brent Povis (Morels), I was initially attracted to this one because of the theme (dogs!). Yet even under the great canine theme, Agility is a pretty fun euro game that’s both easy to learn and has some pretty solid mechanics. In the game, Agility is a race to take three dogs through an agility course.

Allegiance has some of the best production values from a Kickstarter game I’ve ever seen. I’m doubly impressed because it was from a first time publisher. This dueling card game has completely replaced Magic: The Gathering for me when I ever need to get a fix in. Completely self-contained, it takes the MTG concept and adds in both shared decks and unique heroes.

I enjoy playing Pandemic every now and then, however I was definitely ready for a new twist on the game. Pandemic: Reign of Cthulhu is far from just a re-skin of the original Pandemic. While many mechanics in the game are similar, Pandemic: Reign of Cthulhu gives players its own take on the game as players must stop the elder gods from awakening. I actually enjoy it much more than regular Pandemic and probably won’t be going back to the original game anytime soon.

Scythe is probably the game on this list that had the most hype coming into 2016. Stonemaier Games already has an excellent track record with their releases, so expectations were sky-high on this one. That, combined with some amazing artwork from Jakub Rozalski and you have all the hallmarks of a game that people can’t wait to get to the table. And on that front, Scythe didn’t disappoint. While it wasn’t my favorite game of the year, its production qualities were outstanding, the gameplay solid, and overall I found it to be really enjoyable.

Ever since I demo’d Adrenaline at Gen Con this year, I’ve been itching to play it again. Adrenaline takes the concept of a first person shooter video game (FPS) and brings it to our tabletop. Unlike previous failures in the genre (Frag), Adrenaline is actually really fun to play. The designer did a great job of capturing the essence of the FPS in a game that is high on action, shooting and carnage.

Out of nowhere this year came Mechs vs Minions. Published by Riot Games, known for their insanely popular League of Legends video game, Mechs vs Minions impressed us from day one. With production values to rival that of Scythe, Mechs vs Minions also had the game play to back it up. We’ve gotten this one to the table quite a few times already and I’ve enjoyed every play of it so far.

The darling of the summer convention season, Cry Havoc took the convention goers by storm, selling out at every con. After playing the game a few times, it’s not hard to see why. Cry Havoc is an asymmetrical war game/area control game where each player takes command of a unique faction in a battle for the planet. What I like most about Cry Havoc is just how different each of the faction approaches the game. My favorite is definitely the machines for their raw, killing power.

The 2nd Edition of Mansions of Madness breathed new life into a dead game for me. I had played the first edition years ago and found the 1 vs many gameplay to be too bloated, fiddly, and overall, just not very fun. However, the 2nd Edition has dumped the overload role into a companion app that is absolutely stellar. Now a fully cooperative game, I was hooked from my first play and will probably be buying every expansion as it gets released.

I did not expect to like Millennium Blades as much as I did, but it easily slides into the #1 spot for me. Millennium Blades stands out in a crowded year with its unique game play and buckets of replay value. If you haven’t played Millennium Blades before, it’s basically a game ABOUT playing a collectible card game. Designer Brad Talton Jr. absolutely captured the essence of what it is to be a CCG player. Millennium Blades is actually more of an economic game than a dueling game, and that’s what makes it so special. I could play this game over and over.

So that’s my Top 10 Board Game of 2016. What were your favorites? Let me know in the comments below.