Those that love to play Warhammer Age of Sigmar or those thinking about getting into the game may feel like there is a myriad of choices when it comes to choosing an army. Considering there are at least 24 armies, I could completely understand being overwhelmed. Whether you are a newcomer or a seasoned battlefield veteran, feel free to read on and get my hot take on some of the coolest, interesting armies. A quick disclaimer, this is my opinion, and would love to hear what your favorite armies are too! Let me know in the comments below!

Flesh Eater Courts are filled with ghouls and feral vampire lords fighting alongside giant bat and dragon zombies. If you like swarming your opponent with voracious creatures that can slowly regenerate this might be the army for you. Some of the vampire units in this army have some of the best command abilities in the game, allowing certain units to fight twice a turn. One of the cooler aspects of this army is the storyline fluff. In the eyes of those that lead the Flesh Eater Courts, they are nobles and knights defending their land from the invaders that are the living. In reality, they are a shadow of their former selves, feral and savage in nature, dining on their victims.

It seems that everyone loves dinosaurs nowadays. This faction is filled to the brim with lizard and dinosaur units. This faction has two ways to play, one being magic heavy and the other being melee heavy. Known as being one of the best spell-casting armies in the game (aside from Tzeentch) they are a heavyweight in the tournament realm. Nothing feels better than dropping some large dinosaurs with lizard riders on the table though, and it should not be understated how mean the bite of a massive dino is. 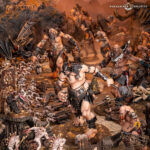 If you like spending a lot of money on single models and only want to worry about having six to seven units on the field, you may want to investigate the Sons of Behemat army. This army consists of nothing but giants with the larger ones having 35 wounds. To put that in perspective, most normal heroes in the game have only 5. This army is amazing to behold when plopped down onto the table and should be considered for those that love to smash things.

Nighthaunt is the first army I ever played in Age of Sigmar. While a bit weaker they have a beautiful model range of ghostly figures and are one of the more mobile armies in the game. Mixed with their immunity to stronger weapons and their spell range they can make up for the fragility they suffer from. They are tough to use effectively against more competitive armies, but make up for the weakness with objective-based play. The model range consists of some great sculpts that lend to some really great painting choices. Just be very careful as most models in this army are fragile.

The masters of magic and chaos in the Warhammer lore. This faction has the big powerhouse magic that is rivaled only by the Seraphon. The models lend themselves to fantastic paint schemes with bright fun colors. One of the most interesting mechanics is the use of fate dice. At the start of the game, the Tzeentch player rolls 9 dice and sets them aside. The player may replace rolls in the game at any time with those dice on a one-to-one basis, allowing for the manipulation of fate on the battlefield.

One of the newest factions in the game these elves are the remnants of the old high elves from Warhammer Fantasy Battles. The Lumineth are an interesting tactical army that relies on the player knowing how they want to specialize their force. With some of the best swordsman and archery units in the game trying to spread your specializations out to far will leave you as a jack of all trades and a master of none. Lumineth also have one of the best spell-casting units in the game, Teclis. With a recent drop of even more specialized units, this force is for those looking for a high elf army in the world of Sigmar that they can highly specialize to their heart’s content.

The Deepkin are the sea elves in Age of Sigmar and one of the premier alpha strike armies in the game. These elves use a tide mechanic giving various bonuses on different turns of the game with turn three being extremely deadly for their enemies. Idoneth Deepkin also have some of the better mounted units in the form of eels. These units are fast and deadly in melee combat. With flight and being able to appear behind enemy lines, they lead the charge when it comes to the brute force that this army can unleash.

An army that I have always wanted to play is the Daughters of Khaine. Ruthless warriors that stick to the shadows and strike hard and fast, devouring the hearts of their enemies upon the battlefield. While they may feel like glass cannons their leader Morathi, just received a huge buff with one of the latest broken realm’s books making her model a force to be reckoned with on the battlefield. If you love fast hard-hitting armies with a touch of trickery and magic that devour the hearts and syphon the blood of their enemies, give the Daughters a look.

Pirate steampunk dwarf airships. I don’t know if I need to say anymore. Kharadron Overlords are the premier range combat army in the game. With 3 different classes of airships and a large number of strong support units, Kharadrons excel at map positioning and shooting. If you get cornered, you can use their abilities to fly high and completely reposition your entire army, and unleash a volley of cannon fire. They also have Aether Gold, which allows them to use once per battle bonuses for each unit. If you take some damage, they also come with an array of heroes to fix up your airships. This is an army I personally play and love to zoom around the board capping objectives and leaving my opponents hurting from a distance. 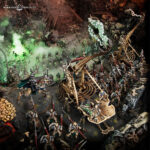 If you can imagine The Terminator movies and then think of a giant army of skeletons, then you have captured the Ossiarch Bonereapers in an image. While slow, seeing them relentlessly advance across the field is terrifying. This army is filled with the undead that have a tactical mindset, and are able to self-sustain and constantly rebuild themselves. Bonereapers have the best points per stats battle-line in the game, with infantry being able to shield wall as long as you have the resources to do so, lending themselves to be a massive quagmire that will almost always win the war of attrition. With a mix of highly skilled infantry, fast-moving calvary, and access to one of the best spellcasters in the game, Bonereapers are a relentless fighting force that allows you to think strategically and force your opponent to engage and holding position with your undying hordes is super satisfying.

Overall Age of Sigmar is a game filled with an array of armies, most of them not even mentioned here. Sometimes the best way to choose an army is what appeals to you visually as well and what you would have fun assembling and painting. No matter what army you choose they all come with flavorful specializations and weaknesses. My list above is by no means one to live and die by, and you should look at all the awesome armies at Gamesworkshop.com to see what speaks to you.