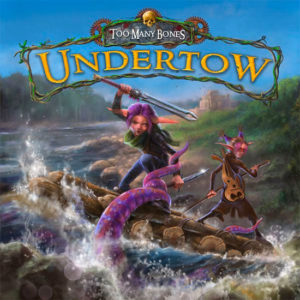 “Here. Review this,” said Tony, who absent mindedly tossed me the topic of my review, Too Many Bones: Undertow, so he could return to alphabetizing his extensive Care Bears collection.

I enjoyed Too Many Bones, so I could not deny Tony’s demand. In fact, I was excited to dive into this game, wondering if it would improve on the original’s experience or if it would simply be a rehash of the original with a raft on its cover.

Too Many Bones: Undertow (Undertow going forward) is a cooperative “dice builder RPG” for one or two players. Dice builder RPG is a fancy way of saying that your character’s skills and abilities will be represented by dice (the “dice” part) and that will increase as your character improves (the “builder” part), similar to a character leveling up in an RPG (astoundingly, the “RPG” part).

The game length varies based on number of players, the difficulty of the tyrant (end boss) and familiarity with the game, lasting between an hour and three hours.

Players will choose to play as one of the two characters included in Undertow: Duster, an assassin with a wolf, or Stanza, a bard. They are both Gearlocs, creatures that are Gnomes with Yoda’s ears.

Note: Undertow is a standalone expansion for Too Many Bones. The components from the original game are 100% compatible with Undertow; however, my review will only focus on Undertow’s components.

A game will last varied number of rounds (called days) based on how well the players perform, as well as the tyrant they are attempting to defeat. Each day has four phases:

The four phase Day cycle will continue until either a) players earn enough progress points from completed encounters to challenge and defeat the tyrant or b) the maximum number of days allowed to defeat the tyrant are exceeded and the players lose.

This is a tough one for me. It will be easier to explain if I start with the issues I have with this game.

The biggest complaints made about the original game, and one that is not remedied by Undertow, is understanding the game. The rulebook is disjointed. I needed to read the rulebook multiple times as well as utilize online resources, such as the FAQ on Chip Theory Game’s website as well as BGG, to fully understand the game and answer rules questions that invariably came up.

I want to stress this – the game is not THAT complicated once you understand it. It is dedicating the time to learn the game to the point that you rarely refer to the rulebook/online resources that takes so long. This time investment, assuming you are willing to do so, will pay off. I can finish a game in approximately half the time compared to my first game.

The second complaint is related to the character building. In the game, your character has two types of dice. The first is stat dice, of which there are four types: health (your hit points), dexterity (the number of dice you can roll and/or spaces you can move per turn), attack (damage your enemies) and defense (prevent damage).

The second type of dice are skill dice. These dice are divided into different sets of skills (called Professions), depending on the Gearloc you choose. You start with one skill, with some you can train after earning training points from an encounter, while others cannot be learned until you have earned their prerequisite skill.

Unfortunately, except for a couple of key skills, it is clearly better to choose stat dice over skill dice in the early game. Skill dice, once used, are exhausted and cannot be used until the next encounter. Stat dice, on the other hand, can be used every turn. I wish the choice between which to improve was more complicated early game, especially because the skills are much more interesting.

So why is this tough for me? I mean, look at everything I just complained about. It is tough because, even with these issues, I love this game!

Most importantly, I love the gameplay, especially the unique Gearlocs and how combat plays out. Figuring out how to best use your Gearloc’s abilities is very engaging. Depending on your Gearloc, you may be able to bleed or stun a baddie (the generic name for the Goblins, Beasts or other enemies you will face) or you may have the ability to buff you and your partner. Of course, this is a dice game, so you better roll well. This is where the name of the game comes from: every attack and defense die, as well as most skill dice, has at least one bones symbol, which is the equivalent of a miss. Roll “Too Many Bones” (see what they did there!) and you will be in trouble. As a consolation prize, you can set aside these bad rolls on a backup plan track that grants special abilities unique to each Gearloc. I really appreciated the inclusion of this mechanism to help mitigate bad luck.

I enjoyed the varied encounters and trying to decide which option to pursue. Do I take the peaceful path but forego the valuable training points reward or do I engage in battle even though it will be difficult to win? The game also provides encounters geared specifically for either solo play or cooperative play, only increasing the replay value.

While the game is expensive ($85 MSRP), you get what you pay for. The components are outstanding. The dice have heat transferred images on them and every skill die is unique. The poker chips representing the Gearlocs and the baddies weigh in at a hefty 11.5 grams. The tactile joy these poker chips provide cannot be explained until you have held them in your hand. The cards are made of PVC. While I have read complaints about these cards, I personally liked these cards, especially the extra durability PVC provides.

Finally, there are gameplay elements new to the Too Many Bones world:

While not included in every encounter, I enjoyed the addition of water based combat, new baddie types and obstacles to my TMB world.

Too Many Bones: Undertow is a great game. I like it solo and I love it two players. Each Gearloc lets me experience something rarely provided by boardgames: in depth character building in an hour or three. I do not have to dedicate hours to a character to see if I enjoy its more powerful skills (hello Gloomhaven!). I simply play another game and try a different build or tweak what skills I choose from the previous game.

I can understand if the cost is too high or if you do not want to/would not enjoy dedicating the time to fully understand the game rules and each Gearloc; however, if that would not be an issue for you, I would highly recommend this game!

Final Score: 4 Stars– A unique dice building game that, once you can wrap your head around the rules, offers a rewarding RPG style experience.

Hits:
• The gameplay is engaging and enjoyable
• The components are outstanding!
• There is plenty of content to play through and significant replay value
• I LOVE the backup plan mechanic
• Solo play is supported and entertaining; the cooperative aspect is even better

Misses:
• Steep learning curve
• Skills, while more interesting, take a back seat to stat dice, especially at the start of the game