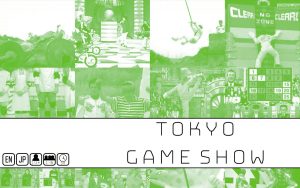 So a quick Google search for “Japanese Game Shows” offers a lot of interesting things. Candy or Not Candy sounds delightfully straightforward. Then there is the more… unique… Man Eats Spaghetti in a Dryer. And you have the always popular, pain-inducing, Slippery Stairs.

Can those turn into board games? Well, probably not. But Jordan Draper Games used these as inspiration for Tokyo Game Show, a box with rules for 50 games using a few components. Let’s take a look at all it offers.

In Tokyo Game Show, one player will take the role of host and the other players will compete in five different contests to test their mettle. You can either play for points or have each game have individual winners and see who wins the most mini-games.

The rulebook breaks the games into 10 different categories including word games, dexterity games, timing, and quiet games. So you can flip through to the section that seems likely to be the type of game you want to play.

The games themselves are simple. The dex category includes Pinkies, where players will race to stack discs on a card using only their pinkies. There is also Disc Drop where players try to throw their wrist band over a disc in a ring-toss like experience.

Other categories will have players dancing, making up names for fictional animal combinations, or coming up with any three words that start with a letter of the host’s choosing.

Someone drops a die, you try to catch it. Players race to say as many nouns that are related to farming… what?!

Now I obviously haven’t played all 50 games in the rulebook. But the ones I have played all have one single thing in common. They haven’t really been enjoyable. I am all for simple and silly. But the games in Tokyo Game Show aren’t silly enough to be laughed at.

Explaining the game rules to my friends as I played the role of host mostly led to eye-rolling. In games with such a breadth of options there are normally a few mini-games to carry it and then some filler. I’m not sure which games are supposed to be the fun ones.

And it pains me to say that. The Tokyo Series of games haven’t always been perfect, but they’ve mostly been interesting. Even if they aren’t for me I try to imagine who they are for. I’m coming up blank on this one.

I think the success of Japanese game shows lies only in part with how irreverent they are. They are cringe-inducing. They are physically demanding at times. Or just so darned weird. Tokyo Game Show certainly doesn’t take itself too seriously, but everything it asks its players to do seems like something you would find as an icebreaker in a kindergarten classroom.

If you received Tokyo Game Show as part of your backed pledge for the Tokyo Series you’ve probably got this one sitting on your shelf somewhere. And maybe when you have a party (haha, if parties ever come back) you can break it out for a bit. You’ll be disappointed and your friends will wonder why you bought it.

Just tell them it came with Tokyo Metro and Tsukiji Market and everyone will nod along. Go catch some fish.

Final Score: 1.5 Stars – A party game sure to kill the party. There are 50 games though. And components are cool, everyone gets a wristband.

Hits:
• Typical of the Tokyo Series – great components
• Lots of variety, I suppose.

Misses:
• Games vary between bad and forgettable.
• The games are simple to a fault. Not fun, silly, or strategic.