We review Tofu Kingdom, a social deduction game published by Blue Orange Games. In Tofu Kingdom, one player takes on the role of the prince trying to find his princess among all the characters in the game. 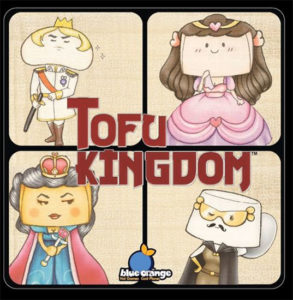 Prince Mochi has traveled from Mochi Kingdom to propose to his beloved Princess Tofu. But the evil Queen Tofu has disguised Princess Tofu in an effort to thwart their alliance. The Prince may ask questions of the castle’s denizens to find his true love’s identity, but many are not there to help him! Will the Prince find his true love and return to Mochi Kingdom? Will he be forced to marry Queen Tofu? Who is Pudding Spy? And what does the Tofu Cook actually cook? High drama and intrigue await in Tofu Kingdom.

Tofu Kingdom is a bluffing and deduction game for three to eight players that takes about 20 minutes to play. Tofu Kingdom plays best with 7-8 people.

Players will take turns acting as Prince Mochi. Prince Mochi mixes the other roles face down and distributes them to the other players with one additional in the center (except in an 8 player game.) The Prince then closes their eyes and the players flip over their roles. Players look to see who is who, then roles are hidden again.

The Prince opens their eyes and tries to find Princess Tofu. Prince Mochi is allowed to ask one of three questions to every player:

Players must answer according to the symbol in the top right corner of their role card. Some characters always tell the truth, some always lie, and others may switch depending on their personal agenda.

Once the Prince has asked a question of every player, they may ask one player of their choice one additional question. Then Prince Mochi indicates who they think is the Tofu Princess. If Prince Mochi correctly chooses Princess Tofu, all characters with the heart symbol receive a soybean (victory point), if the Queen is chosen, those with the crown symbol will be awarded a soybean, and if the mask is picked, then the Pudding Spy and Tofu Maid will each get a soybean.

The Prince Mochi character is passed to the left, and play continues until the round limit (dependent on number of players) is reached. The player with the most soybeans wins!

I’m not usually a fan of bluffing games. I’m a terrible liar. Also, call it eternal optimism but I never believe anyone is lying either, even when I know someone HAS to be. Tofu Kingdom lured me in with its complete adorableness. It’s TINY, and the art is unbelievably cute. I love the handy, purse sized zip tin, but a baggie or pocket for storing the soybean victory counters might come in handy – when this is unzipped they tend to spill out the side.

What really hooked me though is the story. Because Tofu Kingdom isn’t just a cute little game of who’s who – its a Hamlet-like tale of romance, betrayal, intrigue, and murder, all set in a world where the courtiers and their servants might make a delicious lunch. A fairy tale backstory is included in its tiny tin, and this made me a believer. If all the world’s a stage, then with each round I can be the manipulative Queen Tofu, the secretive Pudding Spy, or the sweet Egg Tofu Maid.

Rounds play quickly, and while there’s definitely some manipulation going on, its hard for it to feel mean spirited when you’re playing as rice cake royalty. Even choosing incorrectly elicited more laughs than anything when I played.

I did find myself wishing there were stands for the cards. It’s very easy to get confused as to who is who with all the half truths flying around the table. At least once per game someone would forget who another player was and would accidentally say something against their characters’ reply rules. In particular this would help folks with memory issues.

For me, Tofu Kingdom was a hit, even if its primarily based on a mechanic I don’t usually care for. The cute art coupled with the hammy, dramatic story set just the right tone for a ridiculous time with fun-minded friends. Tofu Kingdom’s small size also lends itself to travel. You should definitely see if you can find your princess in this castle.

Hits:
• Travel size
• The fairy tale backstory is a fantastic intro to the characters.
• All necessary info about each role is included on the cards.