We review Tiny Towns, a light-weight city building game published by AEG. In Tiny Towns, players are trying to earn the most points by placing cubes into their town, and converting them to buildings by matching polynomial shapes. 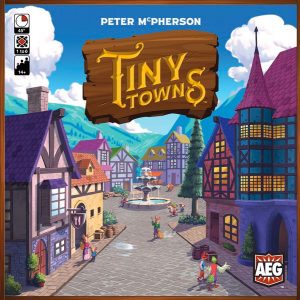 Anyone who has played more than one or two of the top 50 games from the BoardGameGeek list will be able to easily relate to the sentiment: “Board games are not simple.” Games that can be taught in 5 minutes and get a huge market appreciation are really not that common. It only happens about once every 10 years that a game such as Ticket to Ride, with relatively simple rules and a market-enduring appeal come to the gaming landscape.

It’s this rare formula that every publisher chases, and this time AEG (Alderac Entertainment Group) is aiming for that mixture with Tiny Towns. It’s a city building game with a simple enough formula, but it challenges players in abstract planning and spatial arrangement. It scales up to 6 players and takes 45-60 minutes to play, a sweet spot for publishers. However, players should know that this playtime greatly depends on who is playing. More on this later.

The setup for Tiny Towns demands that each player take a board representing a 4×4 grid-town. Additionally, a set of cards representing the potential buildings to construct will be laid out in the middle of the playing area. Each card shows a colored polyomino arrangement which indicates a colored block footprint necessary to build the indicated building.

Turns are also simple. On their turn, each player will call out a color of block. Subsequently, every player in the game must then place that color of block in their town grid. If they manage to create a pattern of blocks matching that of one of the buildings, they may replace the appropriate blocks with a miniature wood building of that type on any of the squares that the blocks previously occupied.

If a player fills up their board with blocks or buildings and cannot add anything more, they are out of the game. They count their score and wait for the other players to finish. It is also possible that one final player can continue to build until they, too, cannot place or choose not to place any more buildings. This variable game time is what was referenced earlier.

Compounding this, different buildings will score points based on their own rules. As an example, houses are one of the buildings which usually reward more points with more in the town. Churches might get points for being next to houses. There is also one building (a monument) that is unique to each player and scores in its own way. Ultimately the highest score from a combination of points wins the game.

It will probably take most readers less time to read the Gameplay Overview twice than it does to explain one mechanism of quite a few other games that come to mind (looking at you Lisboa!). That is not to say that Tiny Towns is too simple. On the contrary, the simplicity is a wonderful elegance that makes it inviting to a wide audience. Tiny Towns can easily get to the table before or after a meatier game and can also serve as a medium main course depending on the group.

However, it’s this simplicity that could also turn off some players who will see it as too light or too random. In fact, if players look around the table and predict what others need ahead of time, there’s really no randomness at all, just the challenge of planning. It does, however, demand that players bring to the table skills with spatial arrangement, resource needs anticipation, and quick analysis of other player boards. This is easier said than done, to say the least.

For this reviewer, Tiny Towns is an extremely enjoyable, replayable experience that suffers mostly from the limitations of what’s in the box. All town boards are the same (expansion idea). The buildings can get tired quickly (expansion idea). And last but not least, there are a ton of gameplay variants just waiting to be explored such as team play and neighboring town building points (expansion idea).

Tiny Towns is good fun and delivers it time and again. It’s quick, burns more than a few neurons, and is ridiculously easy to teach. For gamers who prefer heavier games, it’s the kind of game to keep when distant relatives pop over and the conversation dies down. For families who have played all the Ticket to Ride there is to play, Tiny Towns could be another solid follow-up.

Hits:
• Lots of strategy with buildings
• One of the easiest games to teach
• Variable buildings in play