We review Time Breaker, a time traveling, pick up and deliver board game published by Looney Labs. In Time Breaker, players are trying to capture the time bandit and bring him back to HQ. 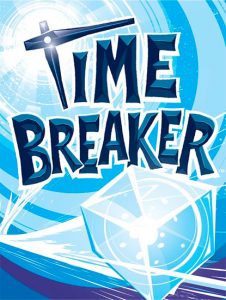 Looney Labs has been making casual and quick playing games for years. They seem to have figure out the magic formula for silliness and accessibly that endears their games to many players. Today, we are going to be taking a look at their newest game, Time Breaker, a game that will have players hopping through time to catch the time bandit.

Time Breaker is a take that and pick up and deliver game for 2-5 players that takes 5-30 minters to play. Time Breaker plays best with 3-4 players.

The goal in Time Breaker is to be the first to catch the time bandit and bring him back to HQ. Each game the board is randomly dealt out into a 5×5 grid with the HQ in the center. The time bandit starts in the upper left square and each player takes a turn in a clockwise manner.

On a player’s turn they can take one of three actions:
• Play a card: Usually this moves either a player or the time bandit.
• Move through a gate. The player follows the arrow on their tiles to move forward to the next year in the sequence.
• Use a wormhole. Blind draw the next card from the deck and play it.

If a player makes it to the tile with the bandit on it, they can perform an “arrest”. From then on, the time bandit will move with that player unit they arrive back to HQ and win. Or until another player shows up and steals the bandit for themselves.

If you are familiar with any of Looney Labs titles, then you probably know their formula. They are often accessible games with a measure of randomness and wackiness thrown in. And Time Breaker definitely doesn’t deviate from that formula.

As you can tell from the above, the game is very easy to setup and play. Deal out the tiles and you are set. While the actions are easy enough to understand, there are a few cards in the deck that will probably have you heading to the rulebook to see how they interact. Thankfully though, also few and far between. While the game isn’t as simple as, say, Fluxx, you definitely won’t have any issues bringing it to the table with your non-gamer friends.

For the longest time, Looney Labs actually made my favorite time travel game, Chrononauts. While the game wasn’t without its flaws, I always found it both entertaining and enjoyable. I loved flipping over parts of history and seeing what the changed parts said. Unfortunately, Time Breaker is missing that bit of wittiness that can make a looney lab game so charming. The artwork is fine and fits the theme and game weight well, but it’s missing the entertaining alternate history stories that made Chrononauts so entertaining to read.

The other issue I had with Time Breaker was just how random it was. Now, if you are a Fluxx veteran, then you probably won’t have any issue here. But for those of us that like a bit more control over your destiny, Time Breakers can be an exercise in frustration at times. Even if you make your way to the time bandit, you still need to get lucky with the card draws to bring him home (assuming he doesn’t get stolen out from you). At least players aren’t completely tied to card draws like they are in Chrononauts or Fluxx, since they can still just walk through gates to the next year.

Yet I’m not sure if they want far enough in that direction. The play time in Time Breaker is listed as 5-30 minutes. That’s a huge variation and also tells you how swingy the game can be. It’s possible someone can win in the first couple of turns if they have the right cards. Yet due to the take that nature of the game, it has the potential to drag on way longer than it should, especially at the higher player counts.

Time Breaker is a decent enough filler game that will entertain you for a play or two. Yet I think the randomness of the cards and the take that nature of the game play are going to put off many gamers. After a few plays I felt like I’d seen all this one has to offer.

That being said, if you still enjoy games of Fluxx and don’t mind the randomness, then Time Breaker might be a welcome addition to your collection. A time travel theme is always a crowd pleaser and its size makes Time Breaker a good game to toss in your bag when you are on the go. I only wish it had a bit more of the patented looney labs charm which it comes to the story.

Final Score: 2.5 stars – While it gives players a bit more control than their previous titles, it still feels a little random and is missing the thematic touches.

Hits:
• Easy to setup and play
• Small size makes it portable for on the go
• Increased player agency vs previous titles

Misses:
• Still a bit too random for me
• Would like a bit more of the theme to be present