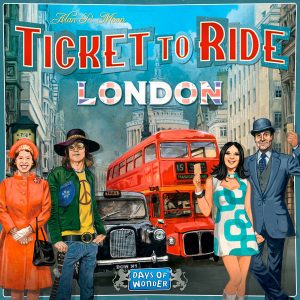 Walk into any friendly local game store and you are bound to see countless versions of Ticket To Ride on the shelves. Multiple base games, expansion maps, and the small box Ticket to Ride: New York. Well, today we are adding more options to that shelf. Ticket To Ride: London is a small twist on the New York version that came out last year. It still plays in about 20 minutes, but does it carry the same accessibility and fun as the rest of the line?

If you are familiar with any of the Ticket to Ride games, London follows generally the same rules. You’ll be given destination cards to connect areas and landmarks of London with your double-decker buses.

Each turn you can gather transportation cards, additional destinations, or claim routes. Transportation cards are spent to place your buses onto the map. Unlike the NY version, there is a point track on the London board so you can track your points as you go. Each player only has 17 buses and the end of the game is triggered when any player only has 2 (or less) remaining. Everyone gets one more turn and the game proceeds to final scoring.

In addition to the normal Ticket to Ride scoring, there are also districts in London that you can attempt to connect districts. Each location is numbered and if your buses connect all of that number, you’ll score that many points (e.g., 4 points if you connect all the “4” locations).

Once all points are added (or subtracted for incomplete routes) the player with the most points wins.

Ticket to Ride is a big hit with some of my casual gaming family. For the past year, Ticket to Ride: New York has been my to-go. It gives nearly the same experience you get in the full hour-plus long version of the game but you can wrap it up in a quarter of the time.

London fulfills more or less the same role. Still plenty of opportunity for taking risky routes, blocking other players, and trying your luck with a last-ditch effort at the destination deck. I struggle to have any desire at all to get the full version back to the table ever again.

There is a reasonable question left to address: Do you need multiple 15-minute versions? Probably not. I like the district scoring in London quite a bit. They serve almost as public destination bonuses that give you some other options to score significant points. The “points of interest” scoring in New York felt a bit less interesting. If you don’t own either, I’d suggest London. If Ticket to Ride: New York already proudly sits on your shelf, I’m not sure this one is different enough to warrant picking up.

The best version of Ticket to Ride is the 15-minute version. While that sounds like a slight dig (and maybe it is), I think these new small box versions deliver a similar experience to the gateway masterpiece that matches the investment of time with the amount of luck and depth involved. It doesn’t feel watered down in any way.

Ticket to Ride: London’s district scoring is a good scoring twist that gives some additional things to consider throughout the game. It puts it above Ticket to Ride: New York for me, but, unless you are a completionist of Ticket to Ride boxes or you love double-decker buses, you probably won’t need both.

Final Score: 4 Stars – A great version of TTR that feels like a complete experience in a fraction of the time.

Hits:
• The same route-building, set collecting experience you expect from TTR.
• District scoring is a cool twist.
• Double-decker buses are cooler than taxis.

Misses:
• Fails to set itself apart from the other small box version.