We review the Ticket to Ride: France and Old West Expansion, published by Days of Wonder. This expansion adds two new map options for the popular Ticket to Ride Board game. 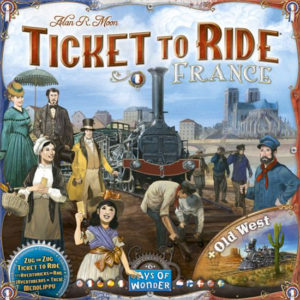 Ticket to Ride is perhaps the most popular modern board game outside of Catan. For almost 15 years now, it has been a gateway game that introduces new players into the ever-expanding board game hobby. The franchise continues to expand with new map packs and today, we are looking at the most recent, France and Old West. How does it change things up from the tried-and-true Ticket To Ride experience? Let’s take a look…

Like most map packs, you will receive a new double sided board and a whole bunch of new destination cards. For the France side of the map, there are also cardboard track pieces. For the Old West, there is an Alvin the Alien token.

The France map is the largest change from the regular Ticket to Ride formula. Most of the routes on the board are not colored track routes, but rather track beds. When you take the “draw cards” action, you will also place one of the available track pieces from the supply onto an empty track bed. Essentially having to build the track first, prior to claiming the route that uses that track. There are areas of track beds on the board that intersect and only one of those intersecting beds can actually be built on, allowing the layout of the map to change a bit from game to game.

For the Old West map, players will choose a starting city and place a station in that city. Throughout the game, you can only claim a route that is connected to one of your stations, essentially making you branch out from where you began, rather than being able to jump around the map as you see fit. You can also build additional stations when you claim a route to a city by spending two additional cards. If other players connect to cities where you have a station, you score the points for their route instead of them.

Old West also includes an optional Alvin the Alien variant. If you use Alvin, he starts in Roswell and when a player connects there, they immediately score 10 points and move Alvin to a different station. The player who ends the game with Alvin scores an additional 10 points.

Although I have moved on to games with a bit more decision making than Ticket To Ride, I have a fondness for it because of the role it played as I entered the hobby gaming world. It is still a huge hit with my family as most of our gatherings include a game or two.

I was hopeful that France and Old West would add a bit more strategic depth to the game. However, it really feels mostly like regular Ticket to Ride, just without being able to hide information as easily. One of the common features of both sides of the map is you are hampered in how you can claim routes. In the Old West you can only build out from cities you are already connected to—you never have to worry about an opponent just jumping across the map and blocking where you are heading.

France offers a similar feeling, as you can’t claim a route until you’ve built the track on a previous action. It forces you to telegraph your intentions ahead of time. You can certainly use your track laying actions to block other people or make them believe you are going a direction you have no intention to go, but at some point or another, you have to really put out the track you want to use.

The track laying mechanism in general can become painful. For experienced TTR players, it’s very easy to forget. You are used to taking two cards and moving on to the next player. Players will have to constantly be reminded to build a track. It drags the game out a little longer than the average TTR experience. It isn’t dramatically longer, but it doesn’t really add much to the game either.

The experience of playing either the Old West or France maps of Ticket to Ride is more or less that same as playing any other Ticket to Ride game. Even for the most die-hard fans, it is hard to recommend.

As a one-time experience, the France and Old West expansion isn’t bad, but I can’t imagine myself wanting to continue to pull this off the shelf. It feels like a longer, more annoying version of the same game and the France track laying is way more trouble than it’s worth. There are plenty of other map packs that give you more variety without all the restrictions and longer play time. 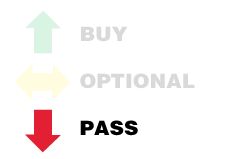 Hits:
• A slightly different take on an award-winning formula

Misses:
• Adds length to the game without adding anything interesting
• Track laying is fiddly and easy to forget
• Both maps restricts where you can claim routes