There is no lack of dungeon crawl games in the board gaming world. One of the more popular themes ranging from heavy hitters like Descent

would probably fall towards the lower end of that spectrum. It’s a game that takes a comical approach to an old theme and challenges the overlord to stop the humans from robbing his dungeon (far from a new concept). 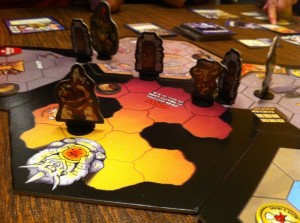 The game is played on a “board” of 10 different hexagonal rooms. During setup, the overlord will place 3 chests with gems in them on the board. The rest of the rooms get trapped chests. The humans will decide which characters they are bringing along as their avatars, choosing from the standard iconic (paladin, wizard, thief and cleric).
The humans take their turn and then the overlord does. On your turn, you will draw a card, move your avatar, play any cards and attack the enemy. And that’s about all there is too it. The rules are quite easy to understand and there was minimal time spent referencing the rule book during the game.
Combat is a straight forward roll of a d6 and adding some numbers. On a hit, you do a point of damage. Do enough damage and the minion or human dies. Speaking of minions, they are brought into play via the overlords cards. His hand will either be minion cards or spells he can play (it felt like the was more of the former). 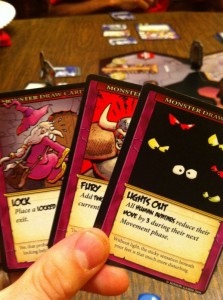 The humans have to divide their time between killing monsters and moving as quickly as possible (as their resources are more limited). Each human avatar also has a few special abilities that makes them unique. 1 constant power and a few once per game powers. It was a nice added touch that helps diversify the game.
Also scattered around the dungeon are various items you might expect to help boost your heroes or minions. These power ups can definitely make a difference in a combat.
That’s the basics of the game. I did feel like the game was more of a 2 player game adaptable to 4 players. The human turn could easily have been taken by 1 player, especially since they all go at once and only 1 player gets to draw cards at the start of their turn.

We had a fairly interesting game. The humans moved slowly through the dungeon at first. Me, playing the overlord, made sure to spawn as many minions as possible to slow them down. The rogue was the first to die (twice) about halfway through the game. The overlord gets a nasty ogre as his avatar. While he is really powerful, he moves very slowly. It took him some time to catch up to the humans, but when he did, he made short work of the thief. The wizard died soon after and the cleric was the last alive, trying to make a mad dash for the 3rd gem (having found 2 already). Lucky for the overlord, the cleric was not successful and I was able to kill this pesky humans trying to rob my treasure. It was a win for the good guy! (at least from my perspective). 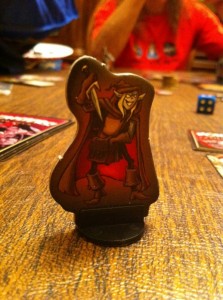 So what did I think. The game was fun which is a big plus. However, it does have a couple of drawbacks. First, the components are less than stellar. The cards felt made of cheap card stock and were hard to shuffle. Second, the chests were kind of silly. They either had a victory gem or a trap. That was it. A little more diversification would have been nice. Perhaps put some items in a few chests, or just make some empty.
But I did like how quickly the game played. We finished in around an hour. I do think it’s really more of a 2 person game then 4. I’d recommend it for anyone looking for a light, dungeon crawl game with a somewhat comical atmosphere. Serious dungeon crawl fans will want to move up to games like Descent

, but as a game to open a game night or fill the space in between some other games, it’s not a bad play.

Misses:
• Sub-par components
• Really a 2 person game adaptable for 4
• Rules could be a bit deeper