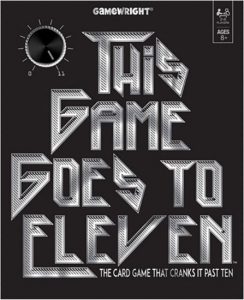 The May 23, 2003 issue of Entertainment Weekly was dedicated almost entirely to counting down the top 50 cult movies. My friends and I spent the vast majority of that summer trying to track down and watch as many movies as we could on that list. The movie in the #1 spot: This is Spinal Tap.

If you don’t understand the relevance, that’s ok. But do yourself a favor and go watch the classic Rob Reiner mockumentary. Needless to say, my interest in trying out This Game Goes to Eleven is based entirely on the nostalgia for that summer and the awesomeness that is This is Spinal Tap. But was there anything fun in this box? Let’s take a look.

This Game Goes to Eleven is a filler length card game for 2-5 players. It plays in about 15 minutes.

Each player starts the game with 3 cards, and each turn you’ll play a card to the discard pile and then draw a new card. The cards range in value from 2-9. There are also a couple of special cards, the “ELEVEN!!!!!” card, and the mean librarian that wants you to just turn the volume down.

Finally, the special cards allow you to do a few neat tricks. If you play the “ELEVEN!!!!!1!!” card to a discard pile, that pile is considered to equal exactly 11, and you can give it to the player of your choice. However, anyone can play the librarian in response and she will shame you into taking all those cards yourself. The rock-n-roll life isn’t risk free, friends.

The game ends when the draw pile runs out. The player who has collected the least cards wins.

Eleven…eleven…eleven… right across the board. You’ll say that a lot playing This Game Goes to Eleven. And you’ll smile, briefly, thinking about how great the movie is. That is probably the most fun you’ll have throughout the game though.

Unfortunately, there are a lot of problems in a game of This Game Goes to Eleven. However most of it can be boiled down into the fact that you just never have many decisions to make. Your hand only contains three cards. If you can make a pile equal eleven exactly, you’ll do that. If you can’t, you will almost certainly play the highest value card that doesn’t bust the pile. If you get stuck in a situation where all your cards will bust the available discard piles, you’ll play the highest card to the discard pile with the fewest cards. And the game proceeds thusly until it comes to an end.

The eleven and librarian cards do give you at least something to think about when you draw one of them, but it’s not a particularly interesting mechanism. You rarely have any insight into when the coast is clear to play an eleven card and you’ll almost always use a librarian in response if you think the pile is coming to you.

The rulebook offers an advanced variant where a guitar pick token is used to indicate who gets the cards when a pile equals eleven exactly, rather than players choosing. This didn’t really do much to add any increased player agency, in fact it kind of makes everything worse because if the guitar pick is in front of you, you’ll normally want to bust a pile ASAP to limit the number of cards you take.

This Game Goes to Eleven aims to be a mass market game that is easily accessible and attempts to grab attention with its pop culture reference. In some ways, it succeeds. There will be groups of people that find this game an enjoyable way to pass sometime in the evening.

There is clearly value in having games that exist that are easy to teach and get people going right away. But there are also many, many better options available to you today. Fuji Flush, for instance, is just as easy to teach and has a lot more interesting gameplay. Unless you just want a box on your shelf that will provoke conversations about the best cult movie ever, steer clear of This Game Goes to Eleven.

Final Score: 2 Stars – There isn’t really much fun to be had. It’s good for maybe a laugh here and there but there isn’t much reason to play it unless you just want to make Spinal Tap jokes.

Hits:
• Easy to teach and play.
• Spinal Tap is a really good movie.