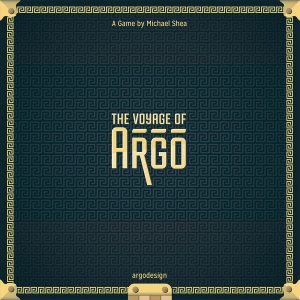 Whenever I switch to first person, readers know they’re in for a curve. The inbox of Board Game Quest gets quite a few submissions. When you’ve seen your fifteenth iteration of “It’s like Cards Against Humanity, but…” you start to switch off. Sometimes we get games that look like a middle school artist slapped some cubes and pawns together with a clip art experiment. Every once in awhile, we get something that looks good. Sometimes really good.

The Voyage of Argo (Argo) looks really good. But wait, let’s quickly journey to the not so distant past when I reviewed The Island of El Dorado. Looking good is not enough. It will get you in the door, but your modern gamer still demands a modicum of gameplay to satiate their thirst for crunchy decisions and flavorful strategy. Let’s see if Argo lives up to the visuals.

The Voyage of Argo is a hand-management, dice rolling game for 2-4 players with a theme from Ancient Grecian myths about an epic journey to steal a golden fleece. It plays best with 3 or 4 players and takes about 20 minutes per player.

Each player starts with a boat. Just a boat with no oarsmen or sails. Through a series of rounds, players will try to upgrade their ship and complete encounters in the hope of achieving Glory cards. The player who has fulfilled the most Glory at game end wins.

The game contains three basic types of cards: Location, Encounter, and Treasure cards. Locations set the stage/rules for the Encounters that players will deal with. If Encounters are successfully defeated, usually players gain a certain number of Treasure cards. These valuable cards could be money to purchase ship upgrades, Glory cards that have conditions to complete, or Feats which give a temporary boost.

Each player starts with 3 Treasure cards. They will take a turn and then play passes around the table until each player has taken their turn. Finally, a Retaliation phase occurs where Encounters will deal some effect to the players in turn order.

To defeat one of the face-up encounters on the table, players will roll a die (more dice with ship upgrades). If the die matches a number in a set on the card, then the player has scored a hit or success on the encounter. For example, the player might roll 2 dice with a ship upgrade and needs to roll a 4, 5, 6. For each die that rolls a 4, 5, or 6, the player scores the hit. If the Encounter card has taken all the hits it can, the player who scored the last hit takes the reward listed at the bottom of the card, usually Treasure cards.

Once all Encounters on the table are defeated, players travel to Port where they may spend any Treasure cards that show Coins and also repair their ship of any damage done by Encounters. Players will then draw a new Location card and new Encounter cards and repeat. There are 9 Locations to journey through before the game ends and Glory cards are counted.

Much like The Island of El Dorado, this game looks great. The Greek boats are fun to punch out and put together. The ship upgrades make your boat look superfly and are exciting when gained. And finally, the overall design aesthetic is top notch. The artwork utilizes Greek principles of color and contrast while still providing easy to ready cards and rules. It was this exact presentation that made me interested in reviewing this game.

HOWEVER, wait for it…

I hope your preferred choice of play space has grog, because this game needs it. This is a beer, beer, more beer, and if you’re still not drunk, pretzels game. There are random victories, take-that elements, a runaway leader with enough ship grades, and if that wasn’t enough, kill-stealing. A victory in The Voyage of Argo should only be celebrated by the callous and petty sailor. That’s fine if your group is that way, but to claim that a high level of decision making and strategery got you there would be inaccurate.

What’s most upsetting about this design is that all the issues are really fixable with a bit more development. The dice roll mechanism can be less random. The card draws for Treasure could be more fair. The balance between various Glory cards could also be examined. The whole game feels like an excited rush to release a concept without the proper balance testing. Or maybe that really is the point of the experience?

This Argo is the perfect vessel to sail to The Island of El Dorado. It looks good. It tells your friends you’re an effete who cares about life looking good. Potential girlfriends and boyfriends will notice your taste and toast your visual palate till the morning sun rises. Or you could actually play a good game with interesting decisions and a lot less luck.

When looking up the design work of the game designer, I found a web site chock full of articles on AI and visual design. They look like a great company if you want a product made, but in this case, The Voyage of Argo would please only casual gamers looking for a random luck-fest to entertain after an evening’s drink. If that’s your game, that’s fine, but the looks of this one far and away outshine the unbalanced mechanisms.

Final Score: 2 stars – Randomness and runaway leader inducing mechanisms give only mild entertainment for this voyage.