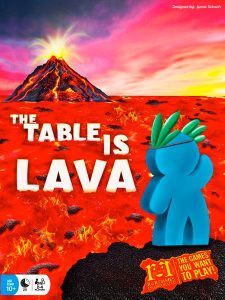 I’m guessing almost everyone has played The Floor is Lava at some point during their childhood. Jumping from couch to pillow to ottoman with the goal of not actually touching the floor is a rite of passage for any youth.

Fast forward to today and game designer James Schoch has brought us The Table is Lava. Published by R and R Games, this title will have players tossing cards into the middle of the table trying to save their meeples (and possibly knocking out some of your opponents’).

Each player starts with an identical deck of 10 cards. The start cards are placed in the middle of the table and seeded with two meeples. Starting with the first player and going clockwise, each player takes a turn tossing a card onto the table.

If your card lands touching another card, you get to place the specified number of meeples on that card. Then, if any meeples were knocked off their card by your toss and are touching the table, they burn a firey death and are removed back to that players supply.

The game ends when all player’s cards have been tossed. Each meeple still standing is worth two points, while each laying down is worth 1. Most points wins!

Dexterity games come in all shapes and sizes, from stacking to flicking to tossing. Some games you don’t even need to be deft of hand to do well in (Rampage comes to mind), but The Table is Lava is definitely not one of those. Tossing cards is a lot harder than it looks! The rules do say that, instead of tossing, you can place your card on the edge of the table and flick it. I actually had more success with that route.

However if you are skilled at card tossing, you will definitely have an advantage in this game. Not only do you need to land your card touching the others, but you don’t want to hit your own meeples and knock them into the lava (I did that quite often). The Table is Lava also has the potential for pieces to go flying, so be mindful of your gaming area when playing. That being said, a nice trick shot that can score you some points and knock out your oppoent’s meeple is a thing of beauty.

I found that the game plays much better with four players than two. This is very much a social “beer and pretzels” type of game, and with two, the whole experience just felt a little ho-hum. It was too easy for a player to just build a chain towards their side of the table. But the chaos that comes with 4 as meeples pile up on the cards, can be really entertaining. Expect massive pileups of meeples and we even had players giving their meeples fake screams as they burned to death in the lava.

When it comes to the components, I’d describe The Table is Lava as…functional. The meeple artwork is cute, but the lava on the cards feels fairly generic. The rulebook also could have used a bit more TLC. There were questions that came up during gameplay that wasn’t addressed in the rulebook (what happens if a card lands on top of meeples? Or upside down?). R and R Games also sent the Coconuts expansion with it, which simply adds pieces for a 5th player (why it’s called Coconuts is beyond me).

The Table is Lava works well at what it does, but it’s very much a one-trick pony. This is a filler game that you will probably pull out every now and then, but after a couple of plays, you’ll have seen all it has to offer. It’s cute, fun for families, but will be very dependent on a player’s skill level at tossing cards. It would have gone a long way to helping the replay value if there were some special cards or even event cards that require specific ways to throw cards. But for a fun little diversion, The Table is Lava has its moments.

Final Score: 3 Stars – Fun for a few plays, but probably won’t be seeing your table too often unless you love to throw cards.

Hits:
• Clever theme used well
• Plays quickly and is easy to learn
• Smartly has cards that lets you place your meeples and opponents as well

Misses:
• Rulebook and components could be better
• Lacks variety from game to game
• Skill trumps all here.